Valerian root is a traditional medicine that has become popular as a supplement and natural remedy around the world, due to its efficacy and availability.

What is Valerian Root?

Valerian root is the root structure of the valerian plant, a flowering perennial bearing the scientific name Valeriana officinalis.  [1]Although it is native to Europe and Asia, it has now been naturalized and is widely grown in North America and a few other regions of the world. The root is where the dense concentration of active ingredients and medicinal components are located, so the small rootlets or the large rhizome itself is harvested. Although it has been in use for thousands of years, valerian root is now known to contain high levels of alkaloids, flavanones, and sesquiterpenes, along with other active ingredients and volatile compounds.

While this used to be a remedy for stomach issues, it is now more commonly used as a sleep aid, thanks to its anxiolytic and sedative effects. Valerian root comes in various forms, and levels of refinement, including in supplement form, or as a brewable tea, depending on how strong of a dose you want to use. Before using this powerful compound, however, it is best to speak with your doctor. 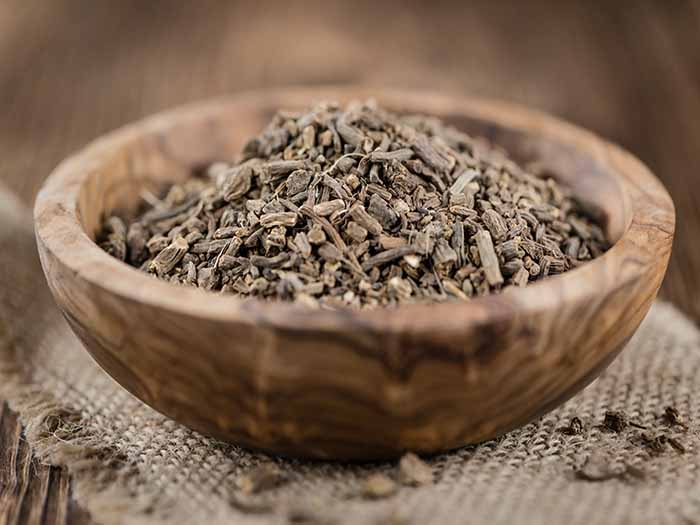 There are quite a few impressive benefits of valerian root, including its ability to induce sleep, reduce anxiety, lower blood pressure, ease menstrual cramps, and reduce inflammation, among others.

The reason that the world knows about this root is that of its effects on sleep. If you suffer from insomnia or have regularly disturbed sleep, this root can help to quiet your mind, release the right hormone combination for relaxation, and provide restful sleep. That being said, there are strong sedative compounds in this root, so be sure to monitor your dosage and pay attention to how your body handles this remedy. [2]

If you regularly find yourself stressed out or overly anxious, even without a clear explanation, valerian root can rebalance the neurotransmitters in your brain, reducing the levels of certain stress hormones and allowing your body and mind to relax. This can also help with symptoms of depression. [3]

Hypertension is one of the most common conditions affecting people around the world, and while it can be caused by many things, the outcomes are often the same – serious cardiovascular conditions. Research has shown that regular consumption of valerian root can help to lower blood pressure and protect against atherosclerosis, heart attacks, and strokes. [4]

The second most well-known use of valerian root relates to women’s health, namely the discomfort of menstrual cramps. The discomfort, both physical and psychological, surrounding menstruation has often been treated with valerian root, thanks to its sedative and hormone-balancing effects. [5]

The nervous system controls a massive amount of our metabolic and physical activities, but it must occasionally take a break, which can be difficult for some people. Valerian root helps to provide that soothing effect on the central nervous system, particularly for disorders such as neuropathy, Bell’s palsy, and others. [6]

Throughout history, various cultures have used valerian root in different ways, but some of the most popular forms are as a tea, a tincture, capsules, tablets, and supplements. The essential oil of valerian root can also be extracted for an extremely potent compound. You should limit valerian root intake, regardless of form, since it is quite high in volatile compounds. Normally, a person wouldn’t take more than 120-200 milligrams of this root, three times per day, as the sedative effects could begin to negatively affect the nervous system. Again, speak with your doctor or a trained natural practitioner before adding this to your health regimen. [7]

Difference Between Valerian Root and Melatonin

Many people confuse valerian root and melatonin because they are both so commonly associated with sedation and sleeping. However, these are two very different substances.

This natural remedy offers a wide range of compounds and nutrients that will help ease your body into more restful states. This comes from a plant and must be harvested and processed before it can be used as a remedy.

This is a hormone that occurs naturally in the human body and helps to regulate sleep and Circadian rhythms in the body. When production decreases as you age, supplementing your natural supply of this hormone with a melatonin supplement can help to aid sleep. [8]

There are a few notable side effects that should be considered before taking valerian root, including its impact on pregnancy, headaches and digestive problems, among others. The sedative nature of the compounds in this root can make it difficult for your stomach to function at a normal metabolic rate, which can result in digestive problems. It is also known to cause headaches and potential complications in pregnancy, so don’t use this remedy if you’re expecting. Finally, due to the effects of this root on the nervous system, do not take it prior to surgery, and always speak to your doctor about any potential drug interactions.

Rate this article
Average rating 4.2 out of 5.0 based on 20 user(s).
Read This Next:
Popular Articles