8 Amazing Benefits of Vitamin B12 (Cobalamin)

What is Vitamin B12?

Vitamin B12 or cobalamin is a water-soluble vitamin present in many foods. It is also available in the form of dietary supplements and prescription medication. It is during the process of digestion that this vitamin is processed from proteins in the human body. This reaction is also highly dependent on hydrochloric acid. [1]

Vitamin B12 is associated with a substance called Intrinsic Factor (IF) to perform useful tasks for maintaining the good health of the human body. It is one of the essential components for taking good care of red blood cells, nerve cells, and other essential entities in the body. [2] 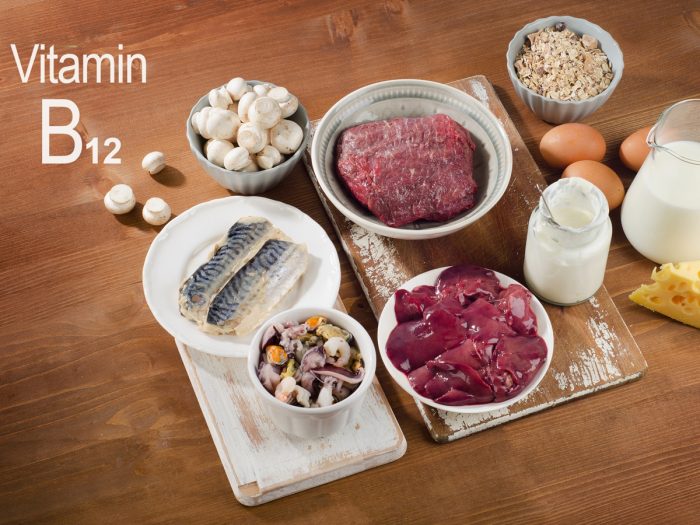 Include food containing vitamin B12 in your regular diet. Photo Credit: Shutterstock

Here is a list of the amazing benefits derived from vitamin B12.

The factsheet on vitamin B12 by the National Institutes of Health state that important functions like formation, repair, and maintenance of red blood cells are largely dependent upon vitamin B12. Also, nerve cells are taken care of by the presence of this vitamin in the human body. This further helps in maintaining a strong nervous system. [3]

It is an important element for the regular formation of DNA in the human body. This is performed during cell division and this vitamin is one of the most significant participants in this process. According to a 2015 report in the Revista Médica Del Hospital General De México Journal, a lack of vitamin B12 in the human body causes abnormal cell formations known as megaloblasts. This may further result in the occurrence of anemia in the human body. Thus, it is advised to include vitamin B12 rich foods in your diet, else vitamin B12 pills or its supplements also serve as a good alternative. [4]

A Harvard Medical School article states that it is important to consume vitamin B12 pills or supplements for relieving the body from fatigue and weakness. This vitamin has the potential for improving the overall stamina of the human body to withstand heavy work pressure. [5]

Vitamin B12 is considered an important health component for treating the severe problem of sickle cell anemia. It is expected to do so by saving the patient’s body from endothelial damage. [6]

A diet rich in food products containing vitamin B12 is helpful in reducing the level of cholesterol in the human body. Also, this vitamin helps in controlling the level of triglycerides, which maintains the proper functioning of the human heart. [7]

Cobalamin is effective in preventing Alzheimer’s disease. This disease is accompanied by symptoms like confusion and cognitive degeneration. It has been reported by medical experts that patients suffering from this disease contain a lower amount of this vitamin in their bodies. Consuming vitamin B12 pills and supplements could help prevent the condition. Researchers from Rush University Medical Center, Chicago, USA, published a report in the Journal of Alzheimer’s Disease, in which it stated that apart from Vitamin B12 none of the B-vitamins has a strong basis of association with the cognitive disease. [8]

It is considered as a part of the treatment for various forms of anemia, such as pernicious anemia and megaloblastic anemia. This vitamin helps to replenish a lacking substance called Intrinsic Factor, which is of great value for maintaining blood normality. [9]

Vitamin B12 is often linked to breast cancer but research conducted in 2008 found that there is no significant effect of this vitamin on cancer. [10]

A 2007 study, however, suggests that when vitamin B12 and folate are used together, they have an ability to lower the risk of cancer. [11]

It is also found in research led by the National Cancer Institute, National Institutes of Health that low levels of vitamin B12 may lead to gastric cancer. [12]

The Food and Nutrition Board (FNB) has suggested certain dosages of cobalamin for all individuals. [13]

For infants, both males as well as females, the FNB has suggested an adequate intake (AI), which is as follows.

The recommended dietary allowance (RDA) of vitamin B12 for all is mentioned below.

The most common vitamin B12 deficiency symptoms include: [14]

Sources of Vitamin B12

To ensure that one’s diet is never deficient in vitamin B12, pay close attention to the following explanation of major sources of this vitamin.

Side Effects of Vitamin B12

Vitamin B12 has low toxicity but sometimes overdose or even prolonged intake of this vitamin can affect your health in many ways.

One major finding by a recent 2019 study is that high vitamin B12 supplementation can increase your risk of lung cancer. [16]

You can also have a look at the side effects of vitamin B12 in detail here.

Rate this article
Average rating 4.0 out of 5.0 based on 73 user(s).
Read This Next:
Popular Articles