Vitamin D3 isn’t the most common vitamin on your supplement shelf, but it does have several unique health benefits to offer.

What is Vitamin D3?

Vitamin D3 is one of the two forms of vitamin D, which is the most important vitamins for overall bodily functions. When the body is exposed to sunshine and the ultraviolet (UV) rays from the sun, the skin can produce vitamin D. The UV rays convert the cholesterol present in the skin to vitamin D. [1]

Vitamin D3 is the common name for cholecalciferol and is closely related to D2 (ergocalciferol), but with some slight differences. The body can synthesize vitamin D3 when it is exposed to sunlight. However, vitamin D2 cannot be synthesized naturally. The commonly recommended form of vitamin supplements is vitamin D3 as it is easier to digest. It is often prescribed to individuals living in low-sunlight regions. 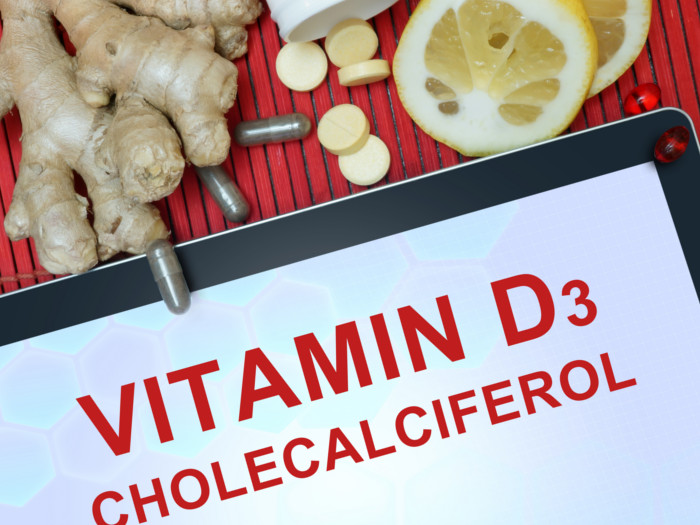 This vitamin is perfectly safe, but if you’re taking it in a supplemental form, you shouldn’t need more than 2,000 IU per day. Most dosages will range between 400 and 1,200 IU per day. The recommended daily requirements of vitamin D3 are:

People who are confined indoors, those who habitually cover up their skin when outdoors, and those with darker skins should take 10 µg of vitamin D per day all year round. Other groups may require such supplementation only in the winter months of October to March. While this supplement can be really helpful when your body needs it, it is not recommended to use vitamin D supplementation in the long term because of some underlying side effects.

The best benefits of this vitamin include improved bone density and brain health, strengthened immune system, weight loss, and a lower occurrence of autoimmune diseases.

Studies, published in the Inflammopharmacology February 2018 issue, found that cholecalciferol may lower the risk of Alzheimer’s disease by improving cognitive function. A deficiency of vitamin D has often been associated with neurodegenerative diseases; for that reason alone, supplementation with this vitamin is common in the aging population. [3] [4]

One of the overlooked elements of vitamin D is the impact it can have on the immune system. It is a powerful modulator of the immune system. So, it can not only prevent infections from various pathogens but also help the body avoid attacking itself. [5]

Vitamin D deficiency is closely linked to the occurrence of autoimmune diseases. So, if you suffer from one of these diseases, this is the supplement you need.

In recent research, it has been found that vitamin D deficiency is linked to obesity. This correlation likely relates to the effect of vitamin D on the metabolism of the body, along with the optimization of the immune system. [6]

The best foods for finding a natural source of vitamin D3 include the following: [7]

Again, these are the dietary sources, but the most effective way to boost your vitamin D3 levels is simply to step outside in the sun!

The deficiency of vitamin D3 in the body, medically termed as hypovitaminosis D, has a worldwide spread. If your body is deficient in vitamin D3, you will experience many symptoms, including a reduction in bone mineral density. This can lead to osteoporosis characterized by reduced bone strength and a high risk of bone fractures. Hypovitaminosis D can also lead to a reduction in the calcification of growing bones and causes rickets in children. Furthermore, this deficiency can cause osteomalacia in female adults during pregnancy and lactation characterized by impaired mineralization of bone. [8] [9]

Vitamin D3 deficiency not only causes metabolic bone diseases but also leads to the dysfunction of other physiological systems.
It can put you at a higher risk of arthritis and compromise your control of the neuromuscular function. It can also impact the body’s ability to regulate its mineral levels effectively and adversely affect the immune system. [10]

Difference Between Vitamins D and D3

The difference between vitamins D and D3 is simply a level of specificity. Vitamin D3 is a type of vitamin D, and the most highly recommended one since it is the type made naturally by the body. Let us look at the main differences between vitamins D2 and D3.

As mentioned, in moderation, this vitamin supplement will rarely have side effects.

What Does Vitamin D3 Do?

Vitamin D3 helps the body to promote intestinal absorption of calcium and phosphorous, which happen to be significant for the strength of the bones. It stimulates mineralization and also affects the maturation of collagen. It enhances the bone reabsorption and allows normal growth of the individuals. Vitamin D3 is regarded as a kidney hormone as it does not satisfy the basic criteria of being called a vitamin i.e. it can be produced in the body and circulates in the bloodstream. After meeting the primary function of calcium regulation, it also strengthens the muscular system and boosts the immune system.

What Is Vitamins D3 and K2 Good For?

Vitamin K2 is known as menatetrenone, which can be absorbed by the intestine easily and can be distributed to the bones. Vitamin K2 and D3 have their independent effects on the body in balancing calcium and better cardiovascular health. When vitamin K2 and D3 are paired together, they prove to have synergistic effects. The K2 and D3 synergies have demonstrated their positive effect on bones and cardiovascular health. This has shown a role to prevent arterial calcification. A 2017 review paper published in the International Journal of Endocrinology suggested that though this potential pairing has been proven to be effective, more clinical data is required for recommending it from broader treatment perspectives. You can also read Vitamin K2 Supplements: Benefits, Uses, & Side Effects for more information. [15] [16] [17] [18] [19]


Dr. Rishita Chandra is pursuing a Master’s degree in Public Health from All India Institute of Medical
Sciences, Rishikesh. She writes as a way to express her panorama in various medical and health-related
fields. She is a health and wellness enthusiast who not only loves researching but also publish the facts
and figures related to health and wellness. She believes that “research is either published or perished.”
Scientifically reviewed content development is her forte and she loves to explore various domains of
Public health. She is also an advocate of mental wellness and writes about psychological and spiritual
health.

Rate this article
Average rating 3.9 out of 5.0 based on 94 user(s).
Read This Next:
Popular Articles