Wheatgrass has proven to be one of the best health-reviving herbs and its benefits include the treatment of bowel problems, high blood pressure, nausea, constipation, and acidity. It also aids in weight loss, oral care, and detoxification of the body.

Wheatgrass, a herb that is known for various health benefits, is prepared from the cotyledons of the wheat plant, which are biologically known as Triticum aestivum. It is a powerhouse of nutrients and is known for its ability to increase immunity and help fight cancer. [1]

The health benefits of wheatgrass only came to light when the people first consumed it in the 1930s. There were many experiments by the agricultural chemist Charles F. Schnabel that were conducted using the herb. It is usually harvested before the wheat plant grows and turns brown. [2]

Here are a few health benefits of wheatgrass.

The basic benefit of the herb is that it is helpful in treating issues in the gastrointestinal tract. It is also known to ease the problems that occur in the bowels. It also has the properties of treating rectal bleeding and stimulating smooth bowel movements, while reducing constipation. [3] 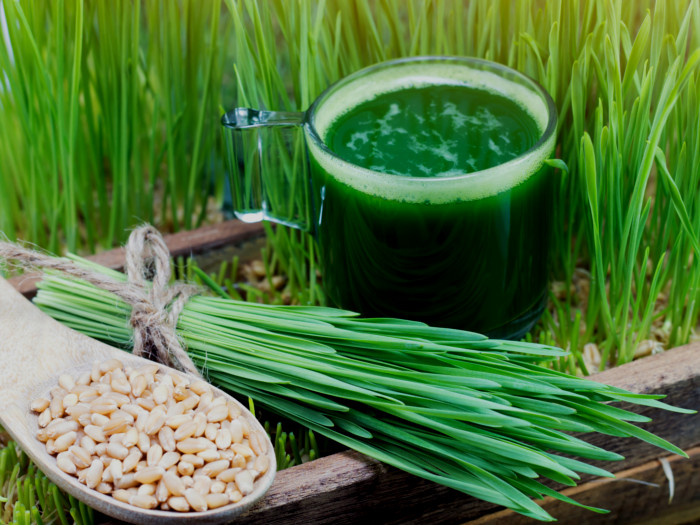 A recent 2017 study by researchers at the Sinhgad Dental College and Hospital, India, revealed that wheatgrass extract is able to inhibit the proliferation of oral cancer cells. More research is still ongoing to determine the exact effects of wheatgrass on other forms of cancer. [4]

In addition to exerting anti-proliferative effects, wheatgrass is also found to help in reducing the side effects of chemotherapy. [5]

Wheatgrass juice is able to help in reducing the toxic effects of chemotherapy. A 2007 study shows that drinking this juice helps in reducing myelotoxicity during chemo, which is a situation where your body starts producing fewer cells that should provide immunity, carry oxygen as well as aid in normal blood clotting. [6]

Wheatgrass can be consumed in the form of powder, which has high amounts of chlorophyll. This chlorophyll is responsible for the detoxification of the body. Apart from the detoxification, it also ensures that there is an increased amount of oxygen sent to every cell. [7]

Wheatgrass is also said to be extremely nutritious and just two ounces of this herb contains the same amount of nutrients present in four pounds of organic vegetables. Therefore, instead of chomping on unhealthy junk food, you can have wheatgrass instead to greatly improve your overall health. [8]

Wheatgrass juice encourages weight loss since it is rich in fiber content. It also provides the body with so much energy that the excess fat caused by an improper diet comprised of junk food is burnt out, resulting in weight loss. This can thus be included in various weight loss diet plans like an all-protein diet plan, for example.

The toxins present in the gums and teeth are also removed when you gargle with the juice squeezed from wheatgrass.

Drinking the juice of wheatgrass can also help in cleansing and detoxifying the body. The lymph nodes are drained of all their toxins and the mucus in the body can be broken up and eliminated, thus eliminating nausea. [9] 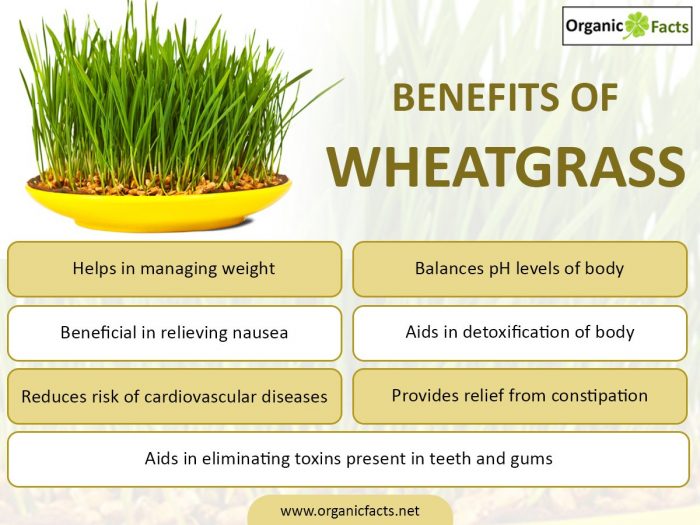 Wheatgrass is a nutrient-rich type of young grass in the wheat family. Photo Credit: Shutterstock

The consumption of wheatgrass powder also lowers the blood pressure because the count of red blood cells is increased. This subsequently reduces the risk of various cardiac diseases.

The acidity in the body is also maintained since wheatgrass is said to be extremely alkaline. It balances the pH levels of the body, thereby promoting better function in various parts of the body.

Rate this article
Average rating 4.0 out of 5.0 based on 76 user(s).
Read This Next:
Popular Articles