Multi nutrient-rich bilberry is valuable in maintaining skin health, cardiovascular fitness, cognitive strength, healthy and disease-free eyes, unobstructed blood flow and better functioning of the overall body. For many decades, the anticancer potential, antimicrobial, antioxidant and anti-inflammatory properties of bilberry have been prized for their effectiveness in a range of disorders including diarrhea, diabetes, liver, and kidney damage.

Bilberry is a small edible dark blueberry of a low-growing shrub in the genus Vaccinium. Bilberry is scientifically referred to as Vaccinium myrtillus. It is a close relative of blueberry, blaeberry, huckleberry, whortleberry, and cranberry. These are delicious berries are native to Northern Europe and have been valued for their therapeutic effectiveness in the conventional system of European medicine for many centuries. [1]

Bilberry is a spreading, low-growing, deciduous shrub with slender branches having tiny pinkish blossoms and bright green, oval and pointed leaves. The plant yields dark purple berries harvested during summertime and can be used fresh or in dried form. Today, they are cultivated in Northern Asia, Europe, and North America and are becoming quite popular as a delicious ingredient in preserves, pies, and jams as well as for their ability to treat a range of health conditions. [2]

Just like its cousins, huckleberry, and blueberry, bilberry is the richest natural sources of anthocyanin, which is an antioxidant that provides it the dark blue color. Along with anthocyanin, it also contains other phenolic components such as quercetin, tannins, pectin, and catechins. It also contains alkaloids, carbonic acids, and a range of vital nutrients including vitamins A, B1, B2, C, E, and K. The mineral treasure present in it chromium, manganese, zinc, and iron. [3] [4]

Here are the main ways that bilberries can make you healthy. Take a look at them.

Bilberry is useful for the maintenance of eye health. Scientific studies have also advocated the effectiveness of bilberry extract in preventing age-related ocular disorders along with other eye diseases such as cataract and night-blindness. Leutin present in the eye, when combined with the compounds present in bilberry, helps enhance vision. Another research conducted on bilberry has also suggested that its beneficial enzyme-stimulating activity protects the eyes from endotoxin-induced uveitis. Its extracts stimulate the production of rhodopsin pigment which supports the eye to adapt to light changes. [5] [6] [7] [8] [9]

Bilberry has been used to treat stomach disorders such as diarrhea, indigestion, and nausea. Its anti-inflammatory and astringent properties help to tighten tissues and reduce the symptoms of diarrhea. [10] 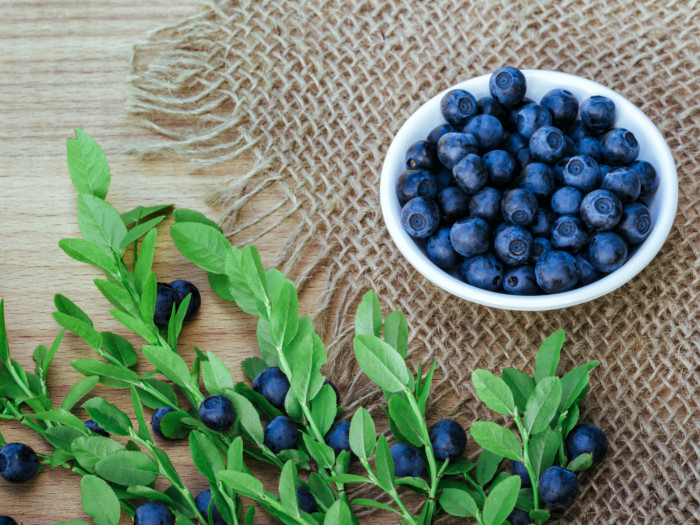 Bilberries are a type of blueberry found in Europe and the Northern U.S. Photo Credit: Shutterstock

Due to the astringent action of tannins and pectin present in bilberry, it exerts a therapeutic effect on stomach inflammations. It also heals inflammation caused by the mucous membranes of the throat and mouth when applied topically. Anti-inflammatory properties of this fruit also assist in curing conditions like thrombosis and angina.

Research studies have validated the positive effects of bilberry on blood pressure and vascular health leading to the inhibition of platelet aggregation and smooth muscle contraction. It helps to strengthen capillaries, stimulates circulation and prevents disorders like varicose veins and hemorrhoids.

Chronic venous insufficiency is a condition in which the valves in leg veins that carry blood to the heart gets damaged. This results in itching, swelling, and pain in the leg. It sometimes also leads to skin ulcers. The anthocyanosides present in bilberry help to strengthen the blood vessels and decrease the symptoms. [11]

The effectiveness of bilberry for managing diabetes has been appreciated since early times and has also been advocated by recent scientific findings. In a study published in The Journal of Nutrition, an animal model revealed that anthocyanin-rich bilberry extract significantly reduced the blood glucose concentration and improved insulin sensitivity. Furthermore, the study showed that the berry extract improved hyperglycemia and insulin sensitivity in type 2 diabetes.  [12]

A group of researchers from the University of California Santa Barbara led by Nguyen V et al. found that bilberry extracts had an antiproliferative effect on human breast cancer cells. They prevent the proliferation of malignant cells and induce apoptosis. A comparative study conducted on different berries has rendered bilberry to be the most potent in inhibition of cancerous cells. It may also help in reducing the side effects of chemotherapy. [13] [14]

Bilberry can reduce the risk of cognitive issues such as dementia and Alzheimer’s. The phenolic compounds present in the fruit alleviates these neurological issues. [15]

Bilberry supports and toughens the collagen structures, stalls bacterial growth and assists in detoxification of the body. It is also recommended by doctors prior to surgeries in order to reduce the associated bleeding later.

The antioxidant power of bilberry makes it a valuable multipurpose remedy. The rich source of anthocyanosides is useful water-soluble chemicals that possess radical scavenging qualities. They seek out for oxygen-free radicals produced during energy metabolism and neutralize their effects. This protective action prevents the occurrence of many problems caused as a consequence of oxidative stress.

Researchers have shown that the inhibitory and radical scavenging activity of bilberry extracts enhances the level of beneficial glutathione and vitamin C in the body and reduces the concentration of nitric oxide in the liver tissues.

Another antioxidant effect of bilberry is its defense against kidney damage. Scientific research has shown that its extracts help in normalizing multiple critical factors including levels of creatinine, serum, blood, urea, nitrogen, and nitric oxide. It also helps to excrete heavy metals from the body resulting in better detoxification. [16]

The heart-protective effect is attributed to the potential of anthocyanins present in bilberry, which helps in regulating the LDL (bad) and HDL (good) cholesterol levels in the body. Another study has suggested that it also helps in preventing multiple cardiovascular diseases such as atherosclerosis. [17] [18]

Bilberry contains phenolic components which have also been found to exert antimicrobial activity. This inhibitory action of the berry works against various human pathogens including salmonella, H.pylori, Bacillus, Clostridium and Staphylococcus aureus, and prevents the development of associated diseases. Recent scientific findings also suggest the potential of its extract in fighting antibiotic-resistant organisms. [19]

Bilberry can be consumed in fresh, dried, powdered, extracted, or in liquid form. When purchasing the extract, ensure that you buy the ones that have 25% anthocyanin in it for good health results. There are different ways to serve the fruit such as:

Although bilberry is considered safe for consumption, there are a few exceptions that need to be considered: [20]

Among the berries, bilberry is considered an important and prized botanical owing to its multiple beneficial properties. Including these multitalented bilberries can deliciously boost the nutritional quotient of your diet and keep you healthy.

Rate this article
Average rating 3.9 out of 5.0 based on 217 user(s).
Read This Next:
Popular Articles