What is Apple Cider Vinegar?

Apple cider vinegar is a type of vinegar made from ripe, freshly crushed, apples. The apples are fermented and passed through a rigorous process to develop the final vinegar product. In the first step, the crushed apples are exposed to yeast to start the alcoholic fermentation process, and the sugars are then turned into alcohol. In the second step, bacteria are added to the alcohol solution which further ferments the alcohol and turns into acetic acid.

Apple cider vinegar has only three calories per one tablespoon (15 grams) and almost no carbohydrates. As per the USDA Food Central Database, it contains small amounts of potassium, magnesium, phosphorus, and calcium. Like apple juice, it may contain pectin, B-vitamins (B1, B2, and B6, biotin, folic acid, niacin, pantothenic acid), and vitamin C. [1]

Acetic acid is the main active compound, responsible for its powerful health benefits, weight loss is thought to be one. The amino acids in this vinegar are effective antiseptics and antibiotics, whereas the acetic acid content in the vinegar can aid in the treatment of various fungal and bacterial infections.

Unfiltered, organic apple cider vinegar contains a colony of bacteria, referred to as the vinegar mother, which has a cobweb-like appearance. This bacteria is gut-friendly and is often considered the most nutritious part of the ACV.

The most impressive health benefits of apple cider vinegar include:

Gastroesophageal reflux disease, also called GERD or acid reflux, is a condition that occurs when there’s a backflow of the food consumed, from the stomach into the esophagus, causing symptoms like nausea and heartburn. Dr. Zoe Yeh of Arizona State University published a study in which, it was noted that subjects who consumed apple cider vinegar showed more than 75 percent reduction of acid reflux episode and an hour delayed reflux as compared to those who were given antacid. These are positive findings that indicate the potential efficacy of ACV in those with GERD issues. [3]

Apple cider vinegar is considered an excellent therapy for losing excess weight. It works by making the body burn unwanted calories and boost the body’s metabolism to optimal levels. It supports appetite control and fat burning in the body. According to a study published by a team of Japanese researchers in the journal Bioscience, Biotechnology, and Biochemistry, acetic acid, which is the main component in it, can help in aiding metabolic syndrome by reducing obesity. [4]

The body weight, BMI, visceral fat area, waist circumference, and serum triglyceride levels of the Japanese subjects were monitored after they were administered the vinegar. A significant reduction in their sugar levels was observed. This study points up the possibility of daily intake of vinegar could be useful in the prevention of metabolic syndrome by reducing obesity.

It may also significantly improve insulin sensitivity in those with either insulin resistance or type 2 diabetes. According to one animal study, diabetic rats fed with apple cider vinegar for four weeks significantly reduced their blood sugar levels. [6] [7]

The vinegar contains acetic acid, along with chlorogenic acid, which is thought to effectively help in reducing LDL (bad) cholesterol levels and increasing HDL (good) cholesterol levels, thereby protecting the cardiovascular system. Researchers from the Department of Nutrition at Harvard School of Public Health published a study in the American Journal of Clinical Nutrition, that showed that women who ate vinegar-based salad dressings (higher intake of alpha-linolenic acid) had fewer chances of developing heart disease. [8]

Balancing your body’s pH levels is imperative to maintain healthy skin, and apple cider vinegar can do wonders for your skin because of its moderate alkaline levels. The pH level of this vinegar is similar to the pH level of the protective acid mantle of the skin. An apple cider vinegar rinse can help restore the glow of the skin and restricts the dilation of the skin’s pores. This keeps your skin from becoming overly oily or dry and balances the production of sebum and improves the circulation of nutrients. [9]

Anecdotally, the use of this vinegar may help ward off bacteria and shed dead skin cells. However, more scientific evidence and studies are required to support this claim.

According to a report in the journal Applied Microbiology and Biotechnology, apple cider vinegar is a combination of lactic acid, citric acid, acetic acid, and succinic acid, all of which have the potential to discourage the growth of propionibacterium acnes, which is a bacteria that is responsible for the growth of acne. [10]

Likewise, a study in the Journal of Cosmetic Dermatology stated using lactic acid to treat acne scars for three months resulted in improvement in the texture, pigmentation, and appearance of the skin. Furthermore, it lightened the scars. [11]

This vinegar is useful in dandruff control and balancing the pH level of the scalp. You may also try applying two to three spoonfuls of vinegar directly to the scalp and rinse it after five minutes or so. Avoid contact with eyes to not irritate. This is considered by many to be an effective home remedy, however, more scientific evidence as to the efficacy of ACV’s effects on hair care is needed to support these claims. [12]

When diluted apple cider vinegar is consumed with a high-carbohydrate meal, it was found to help increase the feeling of fullness and helps with weight loss by preventing overeating. According to a study published in the European Journal of Clinical Nutrition – these findings – based upon a small study population–offer interesting findings of the effects of consuming pickled or fermented products along with a high carbohydrate meal. [13]

A group of researchers from China published a study in the European Journal of Nutrition, which showed that due to a few mechanisms, vinegar showed efficacy in lessening the high blood pressure in rats, which is a primary cause for heart diseases and kidney problems in humans. [14]

The pectin content in the vinegar helps treat diarrhea symptoms by forming bulk fibrous matter. The pectin also forms a protective coat that acts to soothe the lining of the colon. Some say this miracle tonic can give relief as early as twenty minutes. So, two tablespoons of organic apple cider vinegar diluted in eight ounces of warm water, three times a day, is a suggested remedy.

Also, as per research performed at the Nakano Central Research Institute, the combined use of vinegar and sodium chloride –when used at the proper temperature– is highly effective for the prevention of bacterial food poisoning. [15]

Polycystic ovary syndrome (PCOS) is one of the major causes of irregular menstruation in women and is linked with insulin resistance. Insulin resistance affects almost 65-70 percent of the women with PCOS, according to research. Results of a clinical trial that studied seven women with PCOS who were given 1 tablespoon of ACV diluted in a beverage for a little over three months found that it alleviated their symptoms. Four women of the seven experienced regular menstruation and this was mainly due to increased insulin sensitivity after the ACV intake. [16] [17]

The vinegar can be handy in terms of animal and pet care. In the case of cat care, vinegar can be used to clean the litter pan. In the book titled, ‘Apple Cider Vinegar Miracle Health System’ by Dr. Paul Bragg et. al., recommend diluting the vinegar with water and using it to bathe dogs. This can help mitigate various infections, and also repel insects and ticks. [18]

Traditionally, many people believe that apple cider vinegar helps to prevent chronic asthma by applying vinegar-soaked pads to the inner region of their wrist area. However, this hasn’t been scientifically proven.

Instead, the National Asthma Council Australia has stated that the only way that vinegar could help with asthma, is through a solution of naturally fermented white vinegar, which will work well to remove visible mold in one’s home. [19]

There are several uses for ACV in-home treatments and remedies. However, these are home remedies and the evidence is anecdotal. We would recommend seeking a doctor’s advice before incorporating or using ACV for rashes, burns, and other skin irritations. Below are a few common home remedies using ACV: 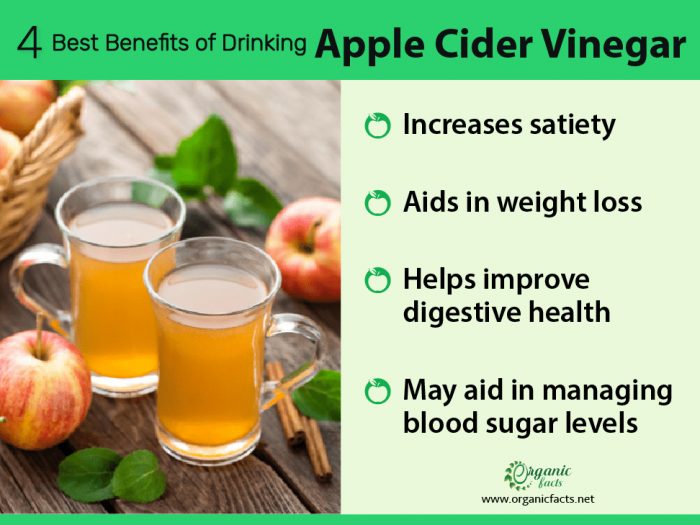 Apple cider vinegar is a type of vinegar made from ripe, freshly crushed, apples.

There is no prescribed dosage of apple cider vinegar that you should be drinking in a day to get its health benefits. However, as its main ingredient is acetic acid, it is highly acidic and can be harsh to consume. To avoid possible side effects, it is best to limit it to 1 tablespoon of ACV diluted in 8 ounces of water, three times per day.

ACV can be used to tenderize the meat and works well with pork. It can also be incorporated into the diet by using apple cider vinegar in salad dressings and other toppings. It is also a staple in pickles. You can try some of our delicious recipes made with apple cider vinegar.

The two popular types of ACV are:

Note: In terms of health benefits, the best type to buy is the organic, unfiltered apple cider vinegar which contains the ‘mother’ bacteria. This variety of vinegar is available in the supermarket as well as online.

ACV is relatively safe for everyone. However, if you consume it in excess, it can cause the following:

Rate this article
Average rating 4.0 out of 5.0 based on 562 user(s).
Read This Next:
Popular Articles