Ginger is a spice with potential anti-inflammatory properties. The top health benefits of ginger may include its ability to help relieve nausea and pain, improve respiratory conditions, and reduce flatulence. Ginger also helps boost bone health, strengthen the immune system, and increase appetite. This spicy root is also good for mitigating obesity and relieving the pain related to menstrual disorders.

Ginger, also known as Zingiber officinale, is a flowering plant, whose root or rhizome is used as a spice. It can be consumed in many forms, fresh, dried, powdered, and in the form of oil and juice. Ginger is a common ingredient in Asian cuisines where it is used to build flavors in curries, dressings, and soups. It is also used in sweets and alcoholic beverages such as ginger cookies, ginger beer, and wine. [1]

Today, ginger is on the FDA’s list of generally safe foods and is often used to mask the taste of bitter medicines such as cough syrups.

Ginger roots can be used to make a healing cup of tea. Photo Credit: Shutterstock

Most of the benefits derived from ginger are because of the presence of an active constituent called gingerol. According to the USDA FoodData Central, it is also rich in carbohydrates, dietary fiber, and protein. In terms of minerals, it has sodium, iron, potassium, magnesium, phosphorus, and zinc. its vitamins include vitamin C, folate, vitamin B6, riboflavin, and niacin. [3] [4]

There are many anti-inflammatory and antioxidant compounds like pantothenic acid, beta-carotene, capsaicin, curcumin, caffeic acid, and salicylate in it. Also, the presence of active compounds like shogaol, zerumbone, terpenoids, flavonoids, paradol, and zingerone in ginger provides many health benefits. [5]

While the traditional uses of ginger for better health are numerous, today we can easily add to it the multiple beneficial properties discovered and confirmed by research. Let’s take a look at some of the most popular health benefits of ginger.

Ginger has long been used as a potentially preventive measure for motion sickness and seasickness. A study published in Nutrition Journal reveals that ginger may help in relieving nausea during pregnancy, but was not seen to be as effective in treating problems of vomiting. Significantly, it did not show any side-effect, an important factor when treating pregnant women. [6]

Its quick absorption and rapid regulation of body functions cure nausea in people who have undergone surgeries, without any side effects. Nausea is also a symptom of migraine. By curing it, ginger can also help in managing migraines. 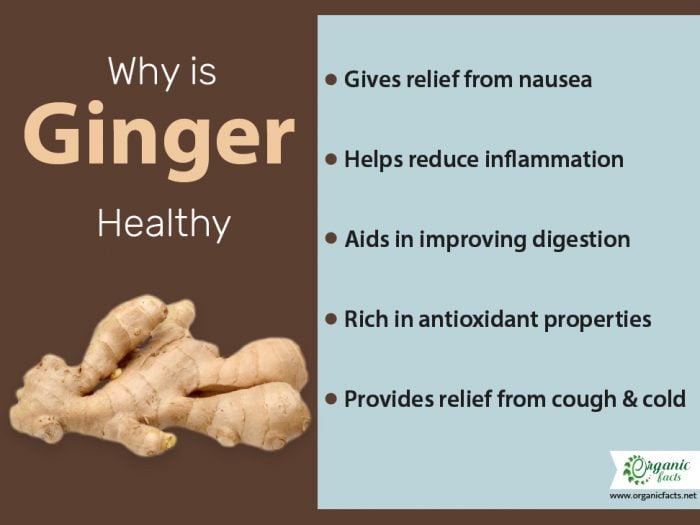 Ginger is a common ingredient in Asian cuisines where it is used to build flavors in curries, dressings, and soups.

May Treat Cold and Flu

This is traditionally used in many Asian countries against cold and flu. A study published in the Journal of Ethnopharmacology found that fresh ginger shows potential antiviral properties against respiratory tract infections. It can be used in the form of tea for providing relief to sore throat and coughing. [7]

Ginger finds a prominent mention in Chinese medicine as a facilitator of the digestive process. While many of its benefits are established part of traditional medicinal history, a review published in 2019 in the journal Food, Science & Nutrition asked for more human studies to understand effective dosage. The study, however, agreed that there was substantial anecdotal evidence, backed by clinical trials. [8]

It is also frequently used as an appetizer or an aperitif since it can stimulate the appetite while preparing the digestive system for an influx of food. It works well as a carminative, thus helping with flatulence. [9]

May Be Remedial for Stomach Ulcers

Ginger may prevent the occurrence of ulcers, which are generally characterized by bleeding and acute gastric irritability. According to a study published in 2016 in the World Journal of Gastrointestinal Pharmacology and Therapeutics, it is very effective in inhibiting the growth of H. pylori bacteria, which is ulcerogenic, thus keeping your stomach healthy. [10]

Ginger is known to boost bone health and relieve joint pain associated with arthritis. It may contain gingerol, which has powerful anti-inflammatory properties. It can improve movement in osteoarthritis, knee inflammation, and rheumatoid arthritis, as cited in a study published in Arthritis & Rheumatism journal. Along with that, it also suppresses the inflammatory compounds like cytokines and chemokines at the source before they begin to affect the body. [11] [12] [13]

Ginger has been used traditionally as a potential medicine to treat respiratory disorders. Recent studies have also seconded its potential anti-inflammatory property. Zerumbone, an active compound, may help relieve asthma. Research shows that allergic airway inflammation is majorly caused by Th2 dominance and the spicy root is successfully able to suppress it. [14] [15]

May Aid in Liver Protection

People suffering from tuberculosis can benefit from ginger, as it helps prevent hepatotoxicity. Animal studies show that it also protects against the liver-damaging cadmium poisoning caused due to the significant ingestion of cadmium. Its essential oil exerts a protective effect against the non-alcoholic fatty liver disease occurring because of obesity. [16] [17] [18]

Animal studies show that ginger can aid in accelerating weight loss and managing obesity by helping boost your metabolism. It may increase exercise endurance capacity so that you work out well and get back into shape to fit in that outfit you were so excited to wear. [19] [20]

Research suggests that ginger could delay the onset of neurodegenerative diseases like dementia, Parkinson’s, and Alzheimer’s by reducing oxidative stress and inflammation. According to a study published in Evidence-Based Complementary and Alternative Medicine, ginger improved cognitive function in middle-aged healthy women. This shows that it can be used to improve cognitive decline among the elderly. [21] [22] [23]

Ginger is well-known for reducing muscle pain and soreness caused due to exercising. The potentially anti-inflammatory properties of this root are to be credited for this benefit. The study points out that ‘daily consumption of raw and heat-treated ginger resulted in moderate-to-large reductions in muscle pain following exercise-induced muscle injury.’ [24] [25] [26]

Ginger may help reduce the levels of prostaglandins in the body, hence it aids in relieving cramps and other forms of discomfort and pain during menstruation. Scientists believe that high levels of prostaglandins contribute to increased menstrual cramps. These hormones function as chemical messengers are the key activators of symptoms such as cramps, pains, and fevers. According to a report published in ISRN Obstetrics and Gynecology, it can also help to reduce the severity of mood and behavior during PMS. [27] [28] [29]

Ginger may help regulate the blood sugar levels in people suffering from type 2 diabetes. Glycemic and lipid abnormalities lead to long-term complications in diabetics, as per a research study published in the International Journal of Endocrinology Metabolism in 2017. Therefore, to improve your insulin resistance and control diabetes, consider adding this root to your diet. Another study published in the journal Complementary Therapies in Medicine in 2014 demonstrated “daily consumption of 3 one-gram capsules of ginger powder for 8 weeks is useful for patients with type 2 diabetes.” [33] [34]

Ginger is known to inhibit bacterial, viral, and fungal infections, owing to the presence of gingerol in it. It may also help in maintaining oral health by killing the pathogens in the mouth and keeping the teeth and gums intact. Its potential antibacterial properties may help ward off pathogenic bacteria that cause urinary tract infection (UTI), bronchitis, and pneumonia. [35]

It has been used since ancient times to help with diarrhea since it may prevent stomach spasms and gas that contribute to and stimulate it. In China, the powdered form is given to those with diarrhea and this traditional practice is followed for thousands of years; scientists have concluded that these ancient treatments are indeed beneficial for this condition. [36]

A known potential aphrodisiac, ginger was used in many cultures to arouse desire and enhance sexual activity. The book Ginger: A Versatile Healing Herb mentions the use of Ayurveda as an aphrodisiac. Its scent has a unique allure that helps in increasing fertility and establishing a sexual connection. This root also helps increase blood circulation. [37] [38]

Ginger supplements are available in most pharmacies in the form of:

How to Buy & Store Ginger?

Select a root that is wrinkle-free or has minimal wrinkles and taut skin. Make sure the skin is not thick and bruised. The best way to check is by scraping it with your nail. The aroma of the fresh root is peppery, sharp, and strong, so inhale the fragrance and enjoy shopping!

It can be stored in a plastic bag in the refrigerator. However, you should peel, cut, or grate it only before using it. If you want to store a cut piece of the root, dry it first so that it doesn’t rot away.

The commonly observed side effects are as follows: