Apple seeds have developed a mysterious reputation of being potentially fatal when ingested. However, before you decide on whether to consume the seeds of this healthy apple, it is better to understand a bit more about apple seeds.

What are Apple Seeds?

Apple seeds are the small black seeds found in the center of apples, which grow on an apple tree, scientifically known as Malus pumila.  [1]The tree is one of the most widely cultivated fruit trees in the world, and while it is native to Central Asia, apples are now consumed and produced in countless nations and regions. While the flesh of the apple is sweet and juicy, the seeds are bitter, present in the range from 8 to 15, and are encased in a hard outer shell.

Apple seeds are highly resistant to digestive juices, which allow them to pass through their digestive tract without being dissolved or broken. One of the components of apple seeds that receives a great deal of attention is amygdalin, which will break down into hydrogen cyanide once it comes in contact with the digestive enzymes of the body. For those who don’t know, cyanide is one of the deadliest substances discovered, and there is no known antidote to this poison. As a result, when it was discovered that apple seeds contained amygdalin, many people stopped consuming apples, and remain particularly careful not to ingest these seeds. [2] 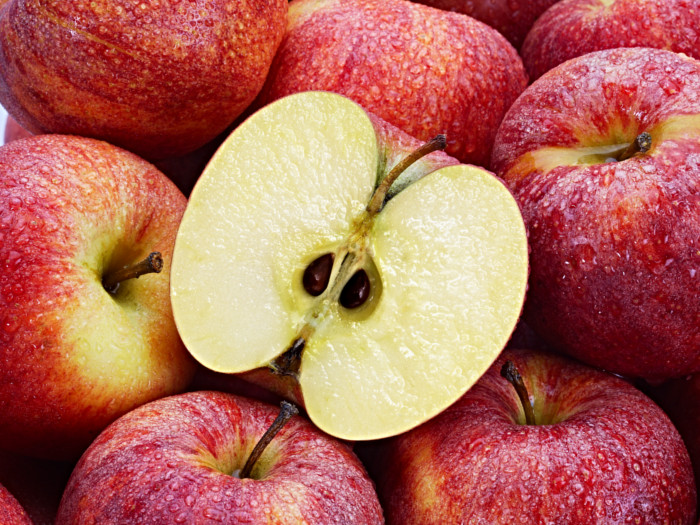 While apple seeds do contain a precursor for hydrogen cyanide, the concentration of amygdalin in these seeds is incredibly small. Research has shown that hydrogen cyanide is lethal when at least 1-2 milligram/kilogram (body weight) is consumed. So for a person of an average weight (165 pounds),  the amygdalin from roughly 210 apple seeds, which would be approximately 20 apple cores, is needed to be consumed.

The potentially toxic compounds found within apple seeds should not be taken in any possible scenario but even when they are accidentally swallowed, the seeds’ hard exterior would prevent the compounds from being released into the body. Intentionally chewing (thoroughly) the seeds from more than 20 apples could be lethal, but that is a rare level of consumption, even for people who truly love apples. [3]

The body is also able to metabolize cyanide in small amounts, neutralizing it before it can do any damage to the brain or heart. When cyanide attacks the body, it inhibits the blood from carrying oxygen, causing the victim to asphyxiate. However, the normal consumption of apples, or even the occasional ingestion of apple seeds, is essentially harmless. [4]

That being said, there are no other well-documented benefits from eating these seeds, with the exception of certain flavonoids that could increase overall antioxidant activity in the body. To eliminate any unnecessary toxins from your body, particularly if you have liver disease or other conditions that impair your body’s ability to detoxify itself, you should avoid eating the seeds.

If you do happen to bite into an apple core and get some of these pips in your mouth, simply swallow them, rather than chewing them, as this will keep the hard outer shell intact, and you will pass them normally in your stool.

This oil should not be consumed orally, but it can be applied to the hair to prevent hair loss, strengthen hair at the roots, soothe inflammation and symptoms of dandruff, and improve the luster and shine of your locks. Apple seed oil has a number of uses in the cosmetic industry and has a lower concentration of amygdalin that your body would process if the seeds were chewed and ingested.

Rate this article
Average rating 3.9 out of 5.0 based on 64 user(s).
Read This Next:
Popular Articles