The health benefits of balloon flower include its ability to treat respiratory ailments, reduce pain, soothe the digestive tract, reduce the risk of certain types of cancer, reduce the severity of allergic reactions, boost the immune system, and eliminate parasites.

What is Balloon Flower?

This common way of referring to Platycodon grandiflorus is due to the unique shape of the flower bud of this herbaceous and perennial flowering plant. With five striking purple-blue petals, this flower has been praised for far more reasons than its unique shape and color. It is native to East Asia. Balloon flowers are some of the few herbal root remedies still used in wide common practice in the world, but its popularity stretches back centuries. The roots of this powerful plant can be dried and crushed into a powder for supplemental forms or can be used in salads and various culinary creations. [1]

The wide range of benefits that can be gained by using balloon flowers in your health regimen are based on the volatile active ingredients found in the root, which include betulic acid, saponins, phytosterol, inulin, and glucose. Together, these chemicals, along with some other organic compounds, can act quickly on the body for some measurable effects. Now, let’s take a closer look at the health benefits of balloon flower. [2] 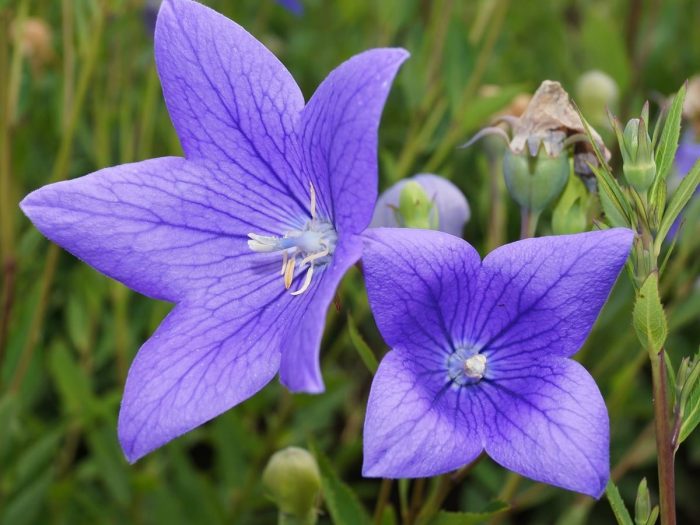 The most commonly known benefit of balloon flower relates to its impact on the respiratory system. The expectorant properties of the flower’s root can help to ease congestion by breaking up phlegm and mucus, which can help relieve colds faster, and eliminate the bacteria and other pathogens that can thrive in mucus build-up. Furthermore, the anti-inflammatory ability of balloon flower can soothe sore throats and prevent chest conditions, such as bronchitis. [3]

If you happen to suffer from an upset stomach, ulcers, dysentery, or any other gastrointestinal issue, you can count on the balloon flower herb to quickly remedy this pain and discomfort. These ulcer-resistant abilities mainly come from the saponins located in the root of balloon flowers. Furthermore, the anti-inflammatory aspect of this herb can help to regulate digestion and lessen symptoms of hemorrhoids. [4]

Kyung-Jun Jang, Hong Ki Kim, (et al.), Department of Acupuncture and Moxibustion, Dongeui University College of Oriental Medicine, Busan, South Korea, published a study in the International Journal of Molecular Medicine, which stated that the antioxidant compounds found in the root of balloon flowers makes them very effective at neutralizing free radicals. These are the dangerous byproducts of cellular respiration that can cause cellular mutation and a wide range of chronic diseases, including cancers! [5]

Aside from the immune response of antioxidants that balloon flower root possesses, it can also stimulate the regular immune system to lower your chances of contracting the common cold or influenza.

While these studies have thus far been conducted outside of human test subjects, balloon flower has shown an impressive ability to lower “bad” cholesterol levels and increase “good” cholesterol levels, which results in a lowered chance of developing atherosclerosis, which in turn lowers your chances of suffering a heart attack or a stroke. [6]

Liver flukes are foul little parasites that can affect many different species, including humans. Balloon flowers have shown an ability in the past to protect against various types of parasites, including those in the liver, increasing the organ’s efficiency and boosting your overall metabolism. [7]

Due to its general analgesic qualities, balloon flower root has often been prescribed for general pain and inflammation, such as that following an injury or surgery, as well as for patients that suffer from gout, arthritis, and other inflammatory conditions. The active ingredients acts quickly on various parts of the body, providing both internal and external pain relief. [8]

Some reports have suggested that consuming balloon flower root can significantly reduce the severity of allergic reactions by inhibiting some of the histamines that are released by the body when certain substances are encountered. This could be great news for people with chronic or seasonal allergies! [9]

There are no commonly known side effects of balloon flower, as there aren’t any particularly dangerous volatile components; however, as with any herbal remedy, there is always the chance of a negative reaction, so use a small amount when first adding this to your health regimen, and always consult with a medical practitioner or trained herbalist before trying this powerful little herb!

Rate this article
Average rating 4.2 out of 5.0 based on 64 user(s).
Read This Next:
Popular Articles