Frozen yogurt is a popular treat in many parts of the world, and can have some surprising health benefits.

What is Frozen Yogurt?

Frozen yogurt, as the name implies, is a frozen dessert product made by freezing conventional yogurt, and occasionally adding other dairy products for flavor and consistency. This is often seen as a healthier option to ice cream, given the additional health benefits that can be gained by eating yogurt. Some frozen yogurt contains live bacterial cultures, similar to regular yogurt. This product typically consists of milk fat, bacterial culture, sweeteners, milk solid and artificial flavorings or additives. Frozen Greek yogurt is another popular variety, which can provide an even healthier option for your sweet tooth. [1] 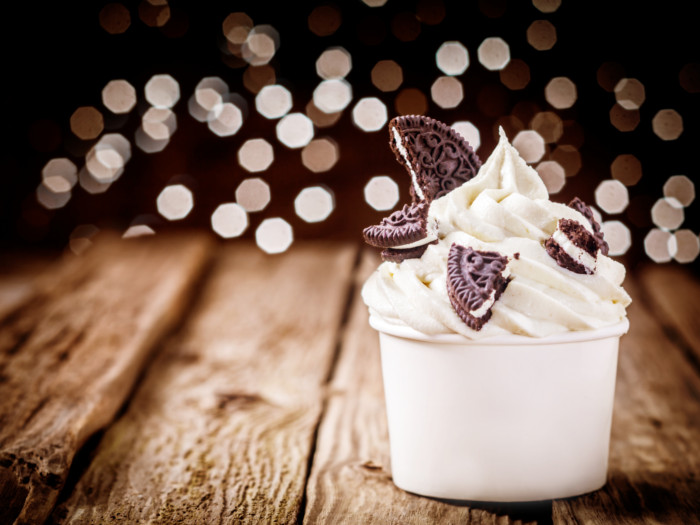 In terms of nutrition, frozen yogurt is far better for you than ice cream, as it provides the same amount of protein and more carbohydrates, but fewer calories and less fat. A cup of this yogurt contains roughly 220 calories, 5 grams of protein, and 38 grams of carbohydrates. While ice cream has much higher levels of fat, this variety of yogurt only has 6 grams of total fat, four of which are saturated fat. [3]

The major health benefits of frozen yogurt that contains good bacteria include its ability to boost cardiovascular health, aid in weight loss efforts, and boost nutrient intake, among others.

While the two are very similar, there are a few key differences between frozen yogurt and traditional yogurt.

Frozen yogurt is most commonly thought of as a cold treat, and as a healthier replacement for ice cream, but it can be used in various other ways as well. Some people like to mix this treat into their smoothies or health shakes, as it can provide a tangy bite, particularly when added to berry-based recipes.

However, it is important to consume frozen yogurt in moderation, as it is relatively high in calories and sugar.

Rate this article
Average rating 0.0 out of 5.0 based on 1 user(s).
Read This Next:
Popular Articles