There are quite a number of home remedies that can help you get rid of gallstones. Regular exercise, intake of vegetables and avoiding junk food are some of the ways to prevent gallstones.

Gallstones are small stones that are made of digestive fluids or cholesterol, which form in the gallbladder. The gladder is small organ located below the liver that stores a digestive fluid called bile. Usually, the stones don’t cause any symptoms and don’t need to be treated. But, if a gallstone gets trapped in a bile duct, it can cause sudden, intense pain in the abdomen that lasts for hours. [1]

Surgery is one of the most common methods to treat gallstones. There are also various home remedies that can be helpful in reducing the stone problem in a safe, effective, natural way.

Let’s see some of the best home remedies for gallstones:

Diet plays an important role in keeping gallstones from forming. 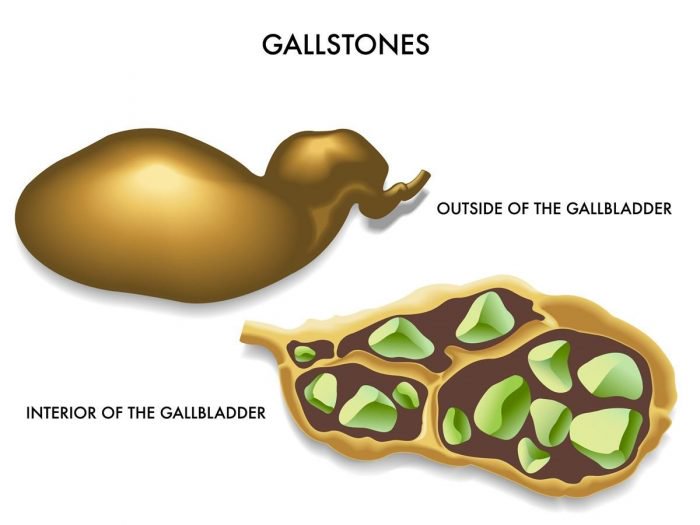 Gallstones are hardened deposits of digestive fluid that can form in your gallbladder. Photo Credit: Shutterstock

Citrus fruit juices and apple juice contain pectin, which works wonders for eliminating gallstones. There is a slightly more complicated home remedy that can treat gallstones effectively, but it needs to be followed for at least three days.

Quebra Pedra (or Chanca Piedra) is an herb that is effective in eradicating gallstones when consumed in the form of tea. Two teaspoons of the herb must be boiled in 500 ml water to make a tea. This should be consumed throughout the course of the day. The treatment needs to be continued for at least two months to get visible results.

Lecithin is a type of phospholipid particle that can easily prevent the formation of stones. Vitamin C plays an important role in breaking down the unwanted cholesterol present in the bile. Hence, make sure that your diet is rich in lecithin and vitamin C.

Since obesity is a major cause of the development of gallstones, people should always keep themselves fit by regularly exercising. At the same time, it is important to lose weight slowly; crash diets and dramatic changes in weight can also result in stones.

Pure and natural apple cider vinegar (ACV) contains acids that can eliminate gallstones effectively. ACV dissolves the stones slowly so they can be safely removed from the body without shocking the system.

Rate this article
Average rating 4.1 out of 5.0 based on 732 user(s).
Read This Next:
Popular Articles