There is a common question of which oil is better – grapeseed oil vs olive oil – and the answer may surprise you.

Grapeseed oil and olive oil share many similarities, but their differences make it clear which one is better for your health.

This oil is made from the seeds of grapes, typically wine grapes, and it has a surprisingly dense content of fats, like many cooking oils. Grapeseed oil has a high concentration of unsaturated fats, but the majority of them are polyunsaturated fats, whereas monounsaturated fats are considered slightly healthier. [1]

Grapeseed oil provides about 120 calories per tablespoon, as well as good levels of vitamin E and various other polyphenolic compounds and antioxidants. The flavor of grapeseed oil is notably milder than olive oil. So, it is often preferred as cooking oil for many dishes. For these reasons and more, it is generally considered less healthy than olive oil. [2] 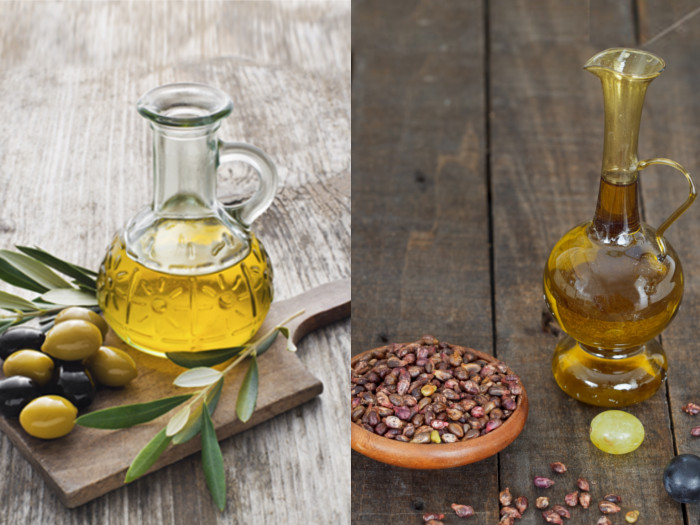 Grapeseed oil vs olive oil: which one is healthier? Photo Credit: Shutterstock

This famous cooking oil has been used for thousands of years and is pressed and extracted directly from olives, giving it a strong and pungent flavor. The nutrition of this oil is similar to grapeseed oil, although it has more monounsaturated fats, and provides vitamin E and K, along with a higher antioxidant concentration. In terms of smoke point and percentage of overall fat, this oil is quite similar to grapeseed oil. However, its flavor and wide availability make it a favorite for chefs and natural healers alike. [3]

Due to the many similarities of these two oils, however, they can often be interchanged in recipes if you need an easy substitute. The only word of caution is to avoid using olive oil in baked goods and desserts as the oil’s flavor can impact the result more than grapeseed oil. [4]

Rate this article
Average rating 3.8 out of 5.0 based on 26 user(s).
Read This Next:
Popular Articles