Many people turn to lemon ginger tea to improve their health, due to its ability to possibly boost the immune system, reduce fever, improve cognition, regulate blood sugar, aid in digestion, soothe pain, and promote healthy hair and skin.

Both lemon and ginger might have antioxidant and immune-boosting effects and these properties aid in stimulating metabolism. Despite it being called a tea, lemon ginger tea is actually an infusion of lemon juice and ginger root, and it does not technically use any tea leaves. However, this doesn’t make it any less powerful for your health. For thousands of years, lemon and ginger have been important components of traditional medicine, and when used individually, they can have impressive effects on the body. However, when the two ingredients are combined in a beverage, they become even more important for health. [1]

Let’s take a closer look at the most important health benefits of this unusual infusion!

Ginger has a very powerful active ingredient, named zingiber, which might eliminate bacterial pathogens that often attack the stomach and compromise digestive function. Ginger also might soothe and reduce nausea and eliminate vomiting, even in pregnancy, according to a study published in Obstetrics & Gynecology. It may promote effective digestion and nutrient absorption. According to another study published in the National Library of Medicine Journal, just 1 gram of ginger may help reduce or alleviate clinical nausea of various kinds. Lemon, on the other hand, is closely linked to reducing indigestion and heartburn. Although lemon is acidic in nature, when mixed with water it can have an alkalizing effect on the digestive system. [3] [4] [5] 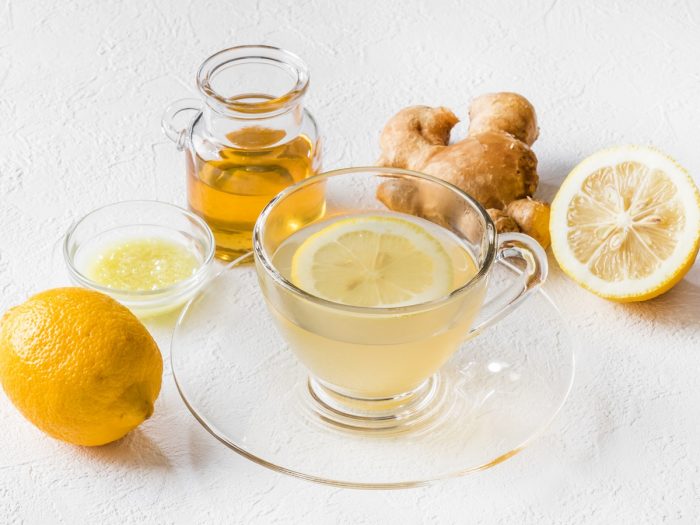 A simple cup of tea can take away your stress and put you in a better place. Photo Credit: Shutterstock

Lemon and ginger may help in improving concentration and cognition. Some research shows that ginger is a potential cognitive enhancer for middle-aged females as it can be excellent at soothing nerves and improving mood. The antioxidant effects mean less oxidative stress. In another controlled study published in the British Journal of Nutrition, citric juices, including lemon water, were found to greatly enhance blood flow to the brain, and potentially improve cognitive function. Thus, needless to say, a combination of lemon and ginger may have an increased potential to raise brain function. [6] [7]

A study in the Journal Food Chemistry indicates that ginger extracts can be a rich source of antioxidants. Lemon may be a rich source of vitamin C, which is known for its potential anti-aging properties. Thus, the high vitamin content of lemon and ginger, combined with their potentially numerous antioxidants, makes this infusion an excellent option for improving skin health. You can drink this tea or might even apply it topically to irritated patches of skin. Antioxidants may help to reduce oxidative stress in the skin and promote the growth of new cells, while the potential antibacterial and antiviral nature of this beverage may protect the skin from infections. [8] [9]

Ginger is considered by many to stimulate metabolism and it might also help to satiate the feelings of hunger. Lemon water, too, has the same effects. According to a 2016 study published in the International Journal of Nursing Research and Practice, when 30 overweight female nursing students were given warm lemon water for 3 weeks, they lost between 1 and 4 kgs of weight, and their waist circumference reduced by 4-6 cm. Therefore, a glass of lemon ginger tea in the morning can help those who are trying to lose weight, primarily by adding extra calorie-burning to their day and suppressing the desire to snack between meals. [10]

Anecdotal evidence shows that lemon and ginger may have been used independently for hair health for centuries. This tea might be high in vitamin A and C, both of which are linked to improved hair health, and reduced dry skin and dandruff. This might help strengthen your hair and give it a luscious appearance. Having said that, there is a lack of scientific evidence supporting the benefits of lemon ginger tea for hair and hence more research is needed.

According to the International Journal of Preventive Medicine, ginger might have anti-inflammatory and anti-oxidative properties that give immunity a boost. Lemons may have vitamin C, which acts as an immune defense against different kinds of infections. Both lemon and ginger are known around the world as immune system aids, so it makes sense that lemon ginger tea might comprehensively protect you from pathogens and illness. When you are suffering from a cold or flu, simply drink 1-2 cups of this tea (made with a 1-inch chunk of ginger) till symptoms last and you may begin to see an improvement and a reduction in irritation of your respiratory tracts. However, it is always advisable to consult a doctor for the exact dosage as excess intake may cause side effects. [11] [12]

When it comes to blood sugar regulation, ginger might help in alleviating the risk of some chronic complications of diabetes, as per a study published in the Iranian Journal of Pharmaceutical Research in 2015. By optimizing the release of insulin and blood sugar in your body, you might be able to prevent the dangerous spikes and drops in blood sugar that can lead to diabetes or can affect someone already diagnosed with this condition. The American Diabetes Association has also declared lemons to be a diabetes superfood. So make yourself a steaming cup of lemon ginger tea right away! [13] [14]

The possible natural anti-inflammatory nature of ginger can not only reduce irritation, swelling, and inflammation in the body but might also function as an analgesic. Another study published in the National Library of Medicine showed that when 2 grams of ginger were consumed for 11 days, the muscle pain caused due to excessive exercise was significantly reduced. Therefore drinking a cup of lemon ginger tea may help you recover from body pain, menstrual cramps, illness, and surgeries. [15] [16] 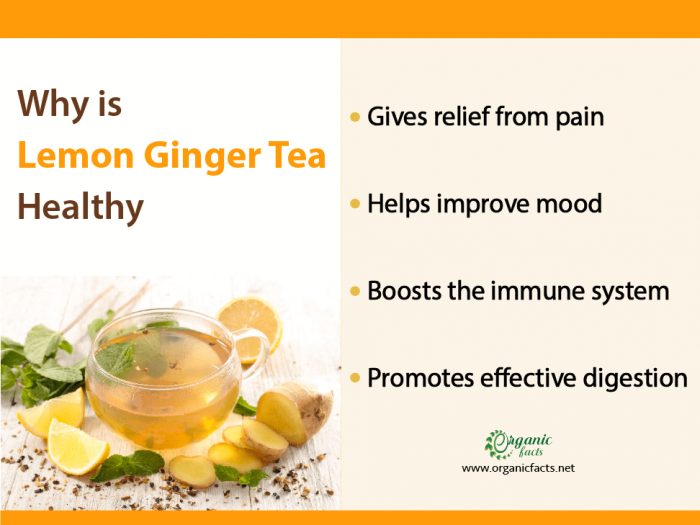 In winter, nothing beats cough and cold better than a cup of piping hot ginger tea.

May Improve the Mood

Aside from the effect of lemon ginger tea on concentration and cognitive function, both components individually are also known to be, in certain cases, mood boosters. There is a good reason why lemon is so commonly used in aromatherapy approaches, and why ginger is thought to relieve tension and lower stress hormone levels in the body, which can definitely make you feel happier and more in control of your emotions. Additionally, a study published in ISRN Obstetrics and Gynecology shows that ginger may help reduce the severity of mood and physical and behavioral symptoms of premenstrual syndrome (PMS). [17]

Furthermore, according to Neuro Immuno Modulation, treatment with citrus fragrance normalized neuroendocrine hormone levels and immune function in depressed patients and may have been more effective than antidepressants. [18]

Side Effects of Lemon Ginger Tea

While there is no standard dose or measurement of the quantity of lemon ginger tea you can drink a day, it is advisable to not exceed 3 cups as excess consumption could give rise to potential health risks. Some people suffer from heartburn or stomach upset after they drink this beverage, which could be the response of a sensitive stomach to ginger’s powerful active ingredients or even a ginger allergy. Some people even complain of rashes. Speak to your doctor or allergist if you have any adverse effects. Pregnant women must also avoid drinking this tea without consulting the doctor. Given that ginger may also contain a group of chemicals known as salicylates that are used as a blood thinner in medicines like aspirin, people with bleeding disorders should exercise caution. [19]

How to Make Lemon Ginger Tea?

In winter, nothing beats cough and cold better than a cup of piping hot ginger tea.  The potent mixture of lemon and ginger might clear up the sinuses and may ease that scratchy and irritable throat. So without further ado, let’s take a look at an easy step-by-step process of making lemon ginger tea at home.

You can also add a dash of cinnamon or nutmeg, in the end, to enhance the flavor, if you prefer. You can also add a tinge of turmeric if you want, as it has anti-inflammatory properties. You can add a dash of orange juice to the tea if the lemon flavor is too strong. This will give it a naturally sweet and tangy flavor.  While lemon ginger tea by itself has tremendous curative potential, you can add a tsp of whiskey, brandy, bourbon, scotch, or rum to it, right before hitting the bed, should you have a bad cold. The combination will work wonders.

If you have tried this recipe, we would love your feedback in the comments section below. And while we can’t taste it, we would love to see how it turned out! You can connect with us on Facebook or Instagram and tag your picture with #organicfactsrecipes. [23] [24]