Lemongrass tea is a delicious and beneficial beverage that is thought to help the body in many ways. This includes improving digestion, lowering blood pressure, boosting the metabolism, strengthening the immune system, and much more.

What is Lemongrass Tea?

You’ve likely heard of lemongrass in a number of different applications, including as a popular flavoring for Asian dishes and various curries, but there is a much more important use of this plant. Lemongrass, scientifically known as Cymbopogon citratus is also used as a culinary herb in many parts of the world, primarily in India, Asia, and Australia.tr

Due to its wide applicability in culinary dishes and its usage as an herbal remedy, it can now be found in most places around the world. Even Citronella oil, extremely popular as an insect repellent, comes from citronella grass, which is another species in the lemongrass genus. Lemongrass oil has certain antifungal and antioxidant qualities and is also used as an insect repellent and preservative.

However, one of the most popular and powerful uses of lemongrass continues to be in tea forms. Stems from lemongrass can be chopped into small pieces and then brewed into a powerful tea that possesses a wide range of nutrients, organic compounds, and antioxidants that impact the body. You should always steep the cut pieces for a long time, as this will help release all the nutrients this plant has to offer.

One of the best things about lemongrass is that it is hearty, grows quickly and thrives in warm weather, provided it has enough water and healthy soil. As a perennial plant, it has become a favorite for people who enjoy gardening and want a constant source of delicious lemony tea on hand. Now, let’s take a closer look at some of the health benefits that lemongrass tea has to offer.

Now, let’s take a closer look at some of the health benefits that lemongrass tea has to offer. 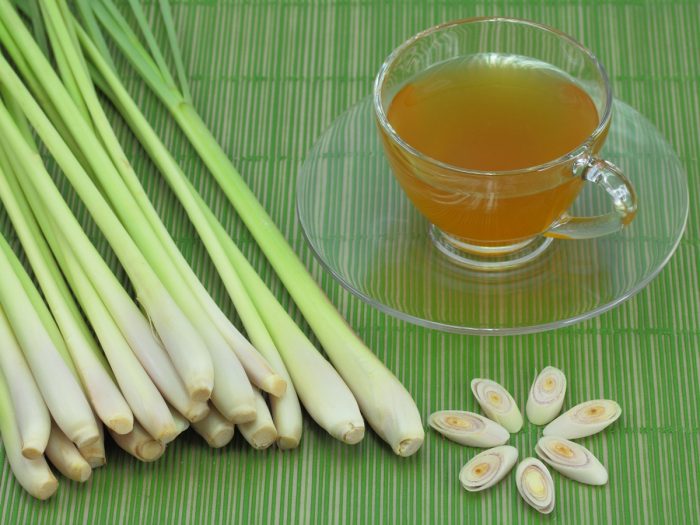 Health benefits of lemongrass tea include the following:

One of the most popular benefits of lemongrass tea is that it is thought to have positive outcomes on cardiovascular health. Some research indicates that lemongrass may be an agent that acts as a natural treatment for hypertension. This is believed to be caused by the potassium in lemongrass, which can help to ease the tension in the blood vessels by acting as a natural vasodilator. This can improve blood circulation and reduce strain on the heart, while also regulating the fluid levels in our body. By lowering your blood pressure, you are also reducing your risk of heart attacks and strokes, as well as other cardiovascular complications. While the true effectiveness of lemongrass on lowering blood pressure is still being examined by researchers, its many other boons make it a good option to integrate into the diet.

There are a number of beneficial compounds found in lemongrass tea and its caffeine content and the polyphenolic compounds are thought to work together to stimulate your metabolism.

For thousands of years, lemongrass has been used in various cultures around the world to soothe stomach issues and improve overall gut health. The tea contains a component called citral that is thought to help digest food more effectively. In Indonesia and England, lemongrass is used as a natural remedy to prevent constipation and other irritation in the bowels.

The antioxidants present in lemongrass tea do a great deal for the body. Antioxidants and polyphenols help defend the body against oxidative stress, one of the underlying causes of chronic illnesses. Choosing lemongrass in herb or tea form has been found to aid in reducing cholesterol levels in those with hypercholesterolemia.

When you begin to feel ill, it is natural to reach for a warm cup of tea. By increasing your antioxidant levels every day with a cup of lemongrass tea, particularly citral, which is the active ingredient, you can defend against the negative effects of free radicals and ensure prolonged health. The antioxidant content of lemongrass tea will give that extra boost to your immune system that it needs when fighting off an infection.

Whether you are suffering from arthritis, a sore throat, a headache, or a twisted ankle, the anti-inflammatory effects of lemongrass tea may have an effect all over the body. By reducing inflammation in the tissues and cells of the body, it can effectively ease pain and reduce irritation. This also makes lemongrass tea a good topical application for certain skin issues; you can allow the tea to cool and then apply it with a cloth to the affected area.

Studies reveal that people who regularly consumed lemongrass tea did see improvements in their mood swings and anxiety. The natural chemicals in lemongrass tea are sedative in nature, which can help relax the mind and prevent worry and stress from building up.

As an add-on to the anxiety and stress fighting characteristics of lemongrass, it is also an excellent sleep aid. As a sedative substance, it can soothe the body and mind by inducing the release of serotonin and helping you overcome symptoms of insomnia or chronic restlessness. A healthy body begins with a healthy sleep cycle, and lemongrass tea may be your sleep regulator.

Word of Caution: You should avoid the use of lemongrass if you are pregnant, as the powerful nature of its components can have certain interactions with medicines. Therefore, if you are considering adding lemongrass tea to your daily or weekly health regimen, it is always a good idea to speak with your doctor first, to avoid any complications.