The health benefits of camphor essential oil may include its potential properties as a stimulant, antispasmodic, antiseptic, decongestant, anesthetic, sedative, and nervous pacifier. It may also act as an antineuralgic, anti-inflammatory, disinfectant, and insecticide.

What is  Camphor Essential Oil?

The essential oil of camphor is obtained during the process of its extraction of camphor from two types of camphor trees. The first one is the Common Camphor tree, bearing the scientific name Cinnamomum camphora, from which the common camphor is obtained. The second variety is the Borneo Camphor tree, which is where Borneo Camphor is derived from; it is scientifically known as Dryobalanops camphora. The camphor oil obtained from both have similar properties, but they differ slightly in aroma and the concentration of various compounds found in them.

Camphor essential oil has many medicinal properties, which are explained in greater detail below.

Camphor essential oil is an effective stimulant that can help boost the activity of the circulatory system, metabolism, digestion, secretion, and excretion. This property helps in giving relief from problems and ailments associated with improper circulation, digestion, sluggish or overactive metabolic rates, obstructed secretions, and a wide variety of uncommon conditions. [1]

Camphor oil is known to be an excellent disinfectant, insecticide, and germicide. It can be added to drinking water to disinfect it, particularly during the summer and in rainy seasons when there is a higher chance of water becoming infected. An open bottle or container of camphor oil, or burning a piece of cloth soaked in camphor oil, drives away insects and kills germs. A drop or two of camphor oil mixed with plenty of food grains also helps in keeping them safe from insects. Camphor is also used in many medical preparations such as ointments and lotions to cure skin diseases, as well as bacterial and fungal infections of the skin. When mixed with bathing water, camphor oil disinfects the whole body externally, and also kills lice. [2] [3] [4] 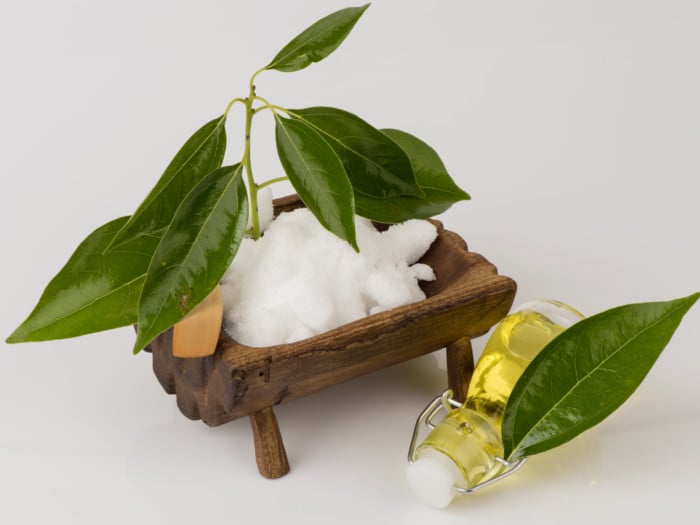 It may be very helpful in giving relief for gas trouble. Primarily, it may not let gas form and secondarily, it effectively removes the gases and healthily expels them.

It acts as a good anesthetic and is very effective for local anesthesia. It can cause numbness of the sensory nerves in the area of application. It also reduces the severity of nervous disorders and convulsions, epileptic attacks, nervousness, and chronic anxiety. [5]

It is known to be a very efficient antispasmodic and gives immediate relief from spasms and cramps. It is also effective in curing extreme spasmodic cholera. [6]

Camphor oil, when consumed, boosts the libido by stimulating those portions of the brain which are responsible for sexual desires. When externally applied, it may help to cure erectile problems by increasing blood circulation in the affected parts since it is a powerful stimulant. [7]

The cooling effect of camphor oil may makes it an anti-inflammatory and sedative agent. It may be very helpful in curing nearly all types of inflammation, both internal and external. It may also relax the body and mind while giving a feeling of peace and freshness. It may prove to be very cooling and refreshing, particularly in the summer. Camphor oil can also be mixed with bathing water to have that extra sensation of coolness in the summer heat. [9]

A detoxifier and a stimulant for the circulatory system, camphor oil can excite blood circulation and gives relief to rheumatic diseases, arthritis, and gout. It is also considered antiphlogistic as it reduces the swelling of body parts. This is yet another beneficial effect of proper blood circulation. [10]

Camphor oil may have a narcotic effect since it temporarily desensitizes the nerves and relaxes the brain. It can also make a person lose control over their limbs if taken in excess since it impacts brain function. The smell of the oil is somewhat addictive. People have been seen to develop strong addictions to repeatedly smelling the oil or consuming it, so be careful.

The strong penetrating aroma of camphor oil is a powerful decongestant. It can immediately relieve congestion of the bronchi, larynx, pharynx, nasal tracts, and lungs. It is, therefore, used in many decongestant balms and cold rubs. [11]

It is sometimes used in cases of cardiac failure, in combination with other medicines. It is also beneficial in providing relief from symptoms of hysteria, viral diseases like cough, measles, flu, food poisoning, infections in the reproductive organs, and insect bites. [12]

Word of Caution: Camphor oil is toxic and can be fatal if ingested in excess. Even 2 grams can be lethal. Ingestion of a slight overdose can still manifest symptoms of poisoning, including extreme thirst, vomiting, and a drop in body temperature. [13]

Rate this article
Average rating 3.9 out of 5.0 based on 931 user(s).
Read This Next:
Popular Articles