Camphor has been used for a variety of ailments for centuries. It is a very common ingredient in Ayurvedic medicine, prized particularly for the benefits of burning and then inhaling the fumes.

Camphor is a white, wax-like product that is made from the bark of the camphor tree, a large evergreen native to Asia. It has a very strong smell, akin to menthol. It can be bought in many forms, including as a block of wax, oil, and powder. [1] [2]

Historically, it has been used as a fumigant, as it is very effective for pest and fungus control. Camphor balls, also known as mothballs, are a popular method of protecting clothing and storage areas from moth larvae.

While effective in small doses, it is poisonous and sometimes fatal in large doses, as it may lead to seizures and strokes, especially in young children. It is a natural irritant, and should not be used around the eyes or mouth. [3] 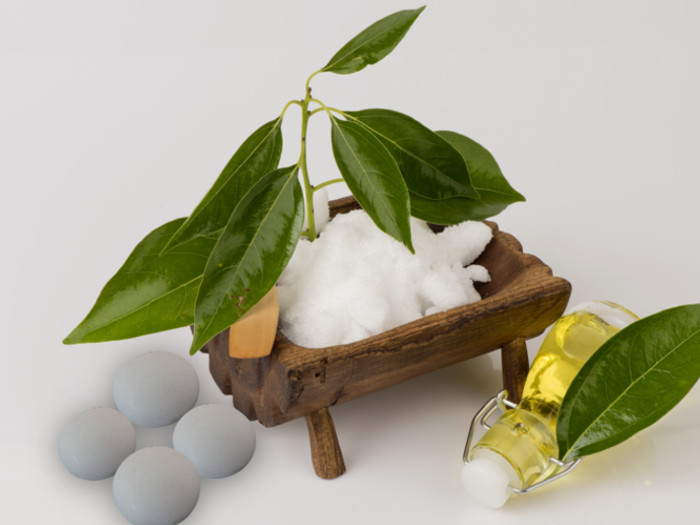 The most common and familiar benefit of camphor is its use as a topical cooling analgesic and it is available over-the-counter for this purpose. Other benefits include the following:

Applied to the skin as a lotion or in a carrier oil, this herbal remedy cools and numbs the skin, reducing pain and inflammation. It is also found in many skincare products to alleviate itching and irritation. Camphor oil or ointment is also used to treat nail fungus and eczema. For this reason, it is often found in lotions and rubs for sore muscles, because it quickly relieves pain and swelling.

It is commonly found in cough and cold medications and decongestants, like mentholated chest rubs, as the fragrance can help you relax and sleep better by alleviating congestion. [4]

Camphor also finds a place in hair care routines. It is said to help calm the scalp, reduce dandruff concerns and itchiness, thus improving overall hair health. One way of using this for this is by crushing camphor tablets in a carrier oil for a hair massage. To better dissolve the tablets, heat the oil for 10 seconds and let it cool down before application. [5]

While it is not advisable to use camphor at home for this purpose, studies have found it to be effective in hormonal management. While one study suggests that it could improve reproductive functions in quails, another one conducted on rats found that it is effective in testosterone suppression. [6] [7]

People who suffer from gas and bloating often eat a form of edible camphor called kacha kapoor, made specifically to treat the digestive system and sold primarily in India. It is prescribed for the treatment of diarrhea and gastroenteritis. However, it is best to consult a professional before trying this at home, as the wrong dosage could have side effects.

This ointment is used topically to treat symptoms of osteoarthritis. Consumption of this powerful substance is also thought to help in the treatment of nerve disorders, muscle spasms, and epilepsy. As with hair oil, suitable amounts of camphor can be dissolved in a carrier oil to be used for massage. OTC gels are also available. [8]

As with any new herbal or natural remedy, speak with your doctor before adding this to your health regimen.

Rate this article
Average rating 4.0 out of 5.0 based on 20 user(s).
Read This Next:
Popular Articles