The health benefits of oakmoss essential oil can be attributed to its properties as an antiseptic, demulcent, expectorant, and restorative.

Oakmoss, as the name suggests, may be a kind of moss or lichen that grows on the branches of Oak trees. Oak is distributed all over Europe and North America and so is oakmoss. While most European nations collect this moss, the essential oil from this moss is extracted mainly in France and it is the biggest producer of oakmoss essential Oil. Other than France, there are very few nations, such as Bulgaria and the USA, who produce this oil.

The scientific name of oakmoss is Evernia Prunastri. The essential oil of oakmoss may be extracted first by the solvent extraction method, which first yields a concrete, and then is completed by a vacuum distillation method. The chief components of oakmoss essential oil are atranorine, chloratronorine, delta usnic acid, and evernic acid. [1]

Oakmoss may look ugly to many, with greenish, wet, and a somewhat sludge-like look, but since Mother Nature has hidden uncountable treasures in its most unlikely places, it has bestowed this moss with some very beautiful medicinal properties. Let’s explore these benefits in greater detail.

Sepsis! This small, humble-looking word is a dreaded villain. You might have heard its name innumerable times since your childhood, whenever you got a wound, which would set your Mom running for the hot water and that well known, but scary antiseptic “Tincture Iodine”, so that you do not develop sepsis. You always thought that these were atrocities and ways of punishing you. However, all your Mom did was giving you a little pain to protect you from a much bigger threat, and that was for your own good.

What is this sepsis? Sepsis is a situation caused by infections from microbes, predominantly bacteria. Others, like viruses, protozoa, and fungi can join the place already weakened with infection and make the situation worse. 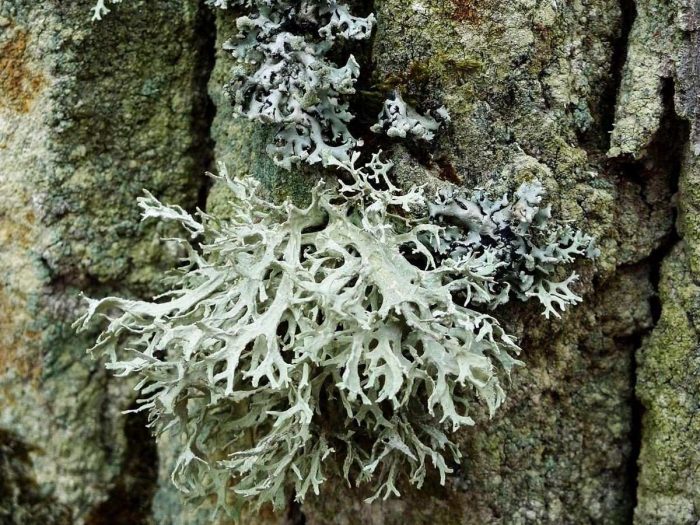 Sepsis mostly happens to wounds but is not restricted to it. It can affect the soft and vulnerable internal organs such as the food pipe, inner ear, colon, urethra, urinary tracts, kidneys, and even the nerves.

Newborn babies may be most susceptible to sepsis since their skin is not strong enough to counter these infections. In developing and backward countries, hundreds of newborn babies still die due to sepsis, which they catch mostly when their umbilical cord is cut, although there are a number of causes.

The symptoms of sepsis are acute pain in the affected places or in the whole body, cramps, convulsions, swelling with redness, stiffness in the muscles and joints, abnormal behavior, and even death in the most severe cases.

The essential oil of oakmoss may have antiseptic properties and there are two good things about it. It does not give burning sensation like the dreaded tincture and it is a sweet-smelling natural substance. It may protect from sepsis by creating conditions in the body that are unfavorable for microbial growth and by eliminating the microbes that are already present in the body or on the wounds. Research about [2] the antibiotic and antiseptic properties of lichens and moss found that both are effective as an antiseptic.

May Act As A Demulcent

Demulcent means soothing. In other words, the oakmoss essential oil can be soothing to any type of inflammation or irritation. It may be soothing to skin and keeps it smooth and soft by maintaining the moisture and oil balance of the skin. Similarly, it may have soothing effects on the digestive system and give relief from scratches, wounds, inflammations and irritations in the esophagus, stomach, and the intestines that are often caused by acidity, highly spicy food, or the ingestion of some irritating or poisonous material. Furthermore, it might also soothe irritations and inflammations in the brain and the nervous system. Last but not least, it may even have soothing effects on mucous membranes and the excretory tracts that might have suffered scratches, inflammations, and irritation due to constipation, acidity, spices, and wounds due to undigested substances and hard bowels. 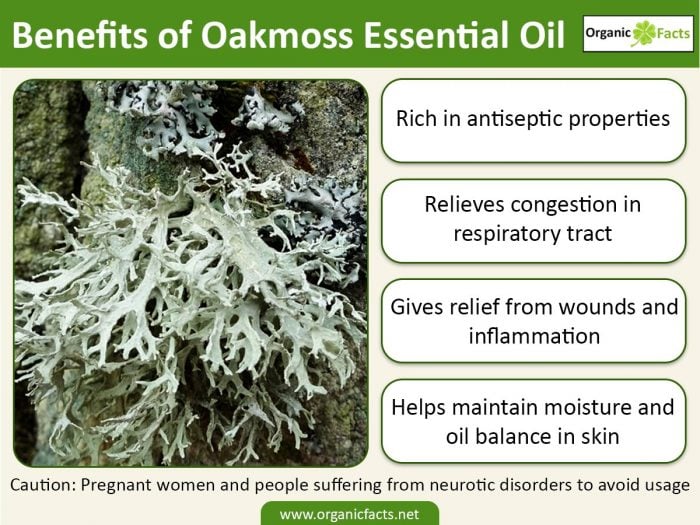 The process of loosening the hard phlegm or catarrh accumulations in the various parts of the respiratory system, such as the bronchi, trachea, larynx, pharynx, and lungs and removing them from the body is called expectoration. It gives immense relief from congestion in the chest, breathing troubles, asthma attacks, and coughs. The agent that result in expectoration is called an expectorant. The essential oil of oakmoss might be a powerful expectorant. It may help pull out phlegm and catarrh and give relief from the associated symptoms. Again, this does not make you feel sleepy like most of the expectorants that are available on the market.

A substance that may restore something back to its initial or original condition is called a restorative. Oakmoss oil is one such restorative. It may diminish the effect of the damage done by aging and other daily wear and tears taking place in the body by speeding up their healing and restoring them back to their healthy state. Therefore, it may help restore complete health, as well as the immune system.

A study [3]published in the Food and Chemical Toxicology journal found that oakmoss may also have antimicrobial, antioxidant, and anticancer properties

It might be used in soaps, skin care products, sprays and many similar cosmetics mainly due to its antiseptic and demulcent properties. This oil may also be known for its fixative value.

Oakmoss and its derivatives may also find a wide range of use in the fragrance industry. A review article published in the Flavour and Fragrance Journal identifies 170 such oakmoss extracts, including triterpenes and steroids. [4]

A Few Words of Caution: It may cause sensitization and irritation in the skin and the mucous membrane. It should be avoided by pregnant women and people suffering from nervous or neurotic disorders such as epilepsy and hysteria.

Rate this article
Average rating 4.4 out of 5.0 based on 51 user(s).
Read This Next:
Popular Articles