The health benefits of Wormwood Essential Oil can be attributed to its properties as an anti-helmitic, cholagogue, deodorant, digestive, emmenagogue, febrifuge, insecticide, narcotic, vermifuge, and tonic substance. Wormwood is also known as Green Ginger and Absinthium. In the past, it was actually used in alcoholic drinks such as Absinthe (now banned) to add to its taste and intoxication, since wormwood itself has narcotic effects. Its botanical name is Artemisia Absinthium or Artemisia Annua.

The Essential Oil of Wormwood is extracted by steam distillation of its leaves, twigs, and flowering tops and is chiefly composed of alpha-thujone, beta-thujone, geranyl propionate, linalyl acetate, myrcene, sabinene, trans sabinol, and trans sabinyl acetate.

Before we commence our exploration into its medicinal properties, you should know that the Essential Oil of Wormwood is a potent poison, due to the presence of high concentration of thujone in it. More precisely, it is actually a neurotoxin. So, extreme care should be taken while using wormwood for medicinal purposes and prolonged use should be avoided. That being said, here are some of the medicinal properties of Wormwood essential oil.

Acts as a Cholagogue

Since wormwood essential oil has a cholagogue property, it promotes the discharge of bile from the liver into the stomach and stimulates other discharges as well. This helps in two ways. Firstly, bile, being alkaline or basic in nature, helps in the decomposition or breaking down of food and thereby facilitates digestion. Secondly, it helps neutralize the excess acids in the stomach, thereby giving relief from problems like acidity, ulcers caused due to prolonged acidity, and acidosis. 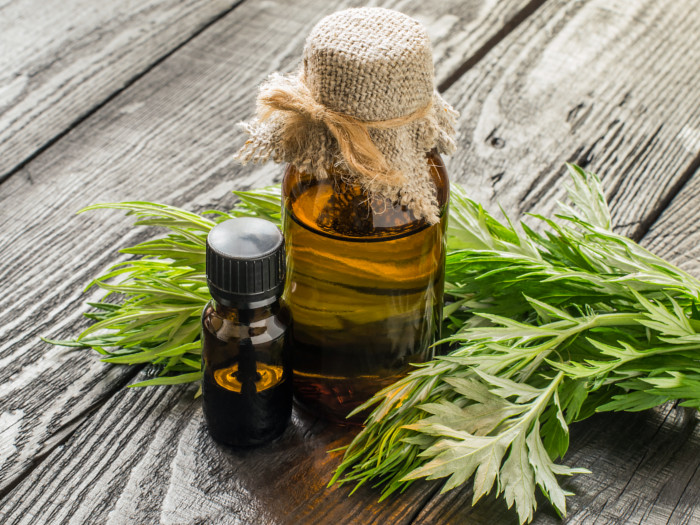 Since this oil is high in thujone content, it has a characteristic smell of that constituent and has an aroma similar to that of Thuja. This justifies its use as a deodorant. However, care should be taken to use it in a very high degree of dilution to avoid excessive inhalation.

Being a cholagogue, it stimulates the production and secretion of bile and other digestive juices into the stomach. This facilitates digestion, which means that this oil can be used for digestive purposes, but only in extremely low doses.

Its property of stimulating discharges makes wormwood essential oil an emenagogue. It stimulates menstrual discharges and helps to open obstructed menstruation. This is very beneficial from the point of view of health since obstructed menstruation can give rise to some health problems in women. The emmenagogue property of Wormwood Essential Oil helps get rid of problems like headaches, abdominal cramps and ache, nausea, fatigue, lack of appetite, and make periods more regular.

The toxic property of certain components like alpha-thujone and beta-thujone of Wormwood Essential Oil help fight infections, as they kill microbes and inhibit their growth. They are also fatal for viruses and bacteria, which give fevers. Wormwood essential oil thereby aids in the reduction of fever, making this oil a febrifuge.

A substance that is highly poisonous to higher animals and mammals will no doubt be poisonous to some lower animals and insects (excluding those stubborn insects who have either developed resistance to some of the deadliest poisons or are naturally immune against them). So, being poisonous, the Essential Oil of Wormwood serves as an insecticide and an insect repellant. It can be used in sprays, vaporizers, and fumigants to have this effect.

In general, the term “Narcotic” has a negative impression on most countries in the world. However, it can also be beneficial against certain symptoms, just like some of the deadliest poisons have their uses as medicines. The narcotic effect of this oil can be used to pacify or calm down nervous afflictions, epileptic and hysteric attacks, convulsions, stress, tension, and insomnia.

The parasitic worms, such as roundworms, tapeworms, and hookworms that are occasionally found in the human body cannot withstand the toxicity of Wormwood Essential Oil and are quickly killed. This helps in regaining a proper growth pattern, particularly in children, due to the proper absorption of nutrients in the body.

Acts as a Tonic

Its toning effect on the endocrine system helps in proper growth and maturity and it also maintains the proper discharge of hormones and enzymes. By toning up the nervous system, it keeps us more active and alert. The immune system is also toned up by this oil, which provides effective protection against infections and diseases. 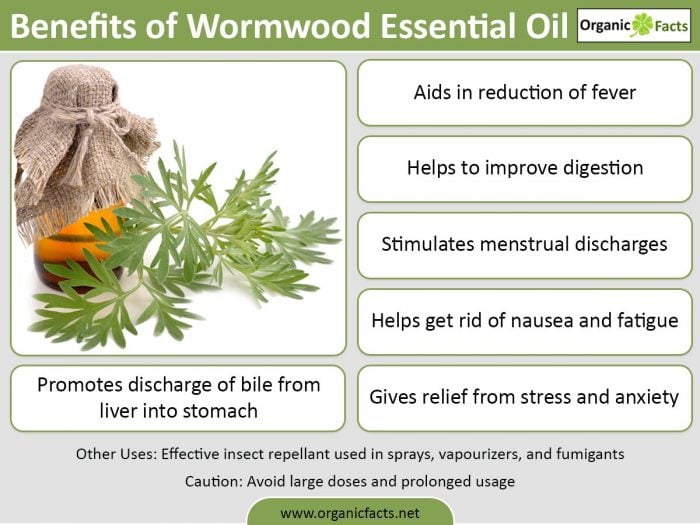 It can also be used to treat anorexia, insomnia, anemia, a lack of appetite, flatulence, stomach aches, jaundice, and other ailments such as indigestion and lose motions arising from improper functioning of the liver.

Wormwood Essential Oil is poisonous and is basically a neurotoxin. Large doses can cause nervous afflictions, convulsions, restlessness, impulsive behavior, and even death. Prolonged use can result in permanent damage to the brain and the nervous system, even resulting in insanity. It does have narcotic effects and is highly addictive.

Rate this article
Average rating 4.0 out of 5.0 based on 196 user(s).
Read This Next:
Popular Articles