Wormwood herb is a well-known substance, famed for its inclusion in absinthe, but there are a number of other possible health benefits offered by this legendary herb.

Wormwood is an herbaceous perennial plant that is native to EuropeThis shrub-like plant has been cultivated for its unique active ingredients and potential uses in herbal medicine. This plant is most famous as a key ingredient in absinthe, and while some think of the herb as hallucinogenic, this isn’t necessarily true. If the herb is smoked or brewed into a tea, however, it can have certain psychoactive effects. Some of the common variants of this plant include grand and common wormwood, green ginger, madderwort, old woman, absinthium, and ajenjo, among others. [1]

Depending on the type of wormwood you use, there may be varying levels of active ingredients, such as thujone, which can cause seizures and other nervous system problems when consumed in high concentrations. However, there are also beneficial compounds, tannins, and flavonoids, which deliver some of the health benefits of this herb, when prepared and administered properly. [2] 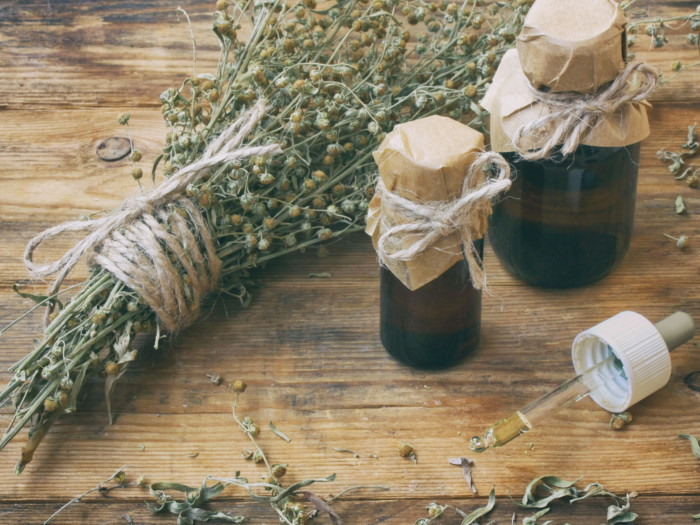 The most impressive benefits of wormwood herb include its ability to prevent fungal infections and defend against malaria, among others.

One of the active ingredients in this herb is a substance called artemisinin, which is well known to combat malaria in tropical regions of the world. By functioning as an antioxidant and destroying the cell walls of the malaria parasite, using this herb in moderate doses can be an excellent first line of defense against this deadly disease. The anti-parasitic nature of this herb works on other unwanted parasites as well. [3]

Numerous studies have now shown that regular supplementation with wormwood herb can, in some cases, eliminate the need for steroids in patients with Crohn’s disease, as the herb can help to improve overall gut health. [4]

Anecdotal and modern evidence both point to the immune system boost provided by this herb, including specific defenses against E. coli and Salmonella, as well as a variety of fungal infections, such as the fungi that lead to yeast infections, Candida albicans. [5]

If you are suffering from small intestine bacterial overgrowth, using wormwood is an excellent way to balance the bacteria in your gut and improve your digestive efficiency. [6]

Research has shown that the active ingredient in wormwood, artemisinin, is also able to induce apoptosis in breast cancer cells. More studies are being done on the herb’s effect on other cancers. It is also packed with terpenoids and flavonoids, which studies have observed to have had a cytotoxic effect on human cancer cell lines. [7] [8]

Following injury or illness, this herb has been traditionally used to stimulate the appetite and ensure a speedy recovery.

While most people only think of using wormwood to produce absinthe, the upper leaves and stems can be used for a variety of natural remedies and come in numerous forms. These include the following:

All of the above can be used in different strengths for your specific conditions. However, consuming an excess of wormwood can be dangerous, so be sure to speak with a trained herbalist before adding this to your health regimen.

If you have a dried form of the leaves in a non-supplement form, you can brew a tea or smoke this herb, both of which have potentially psychoactive effects.

Side Effects of Wormwood

Despite the health benefits linked to this herb, there are some potential side effects, particularly if there is a high level of thujone in the wormwood. These side effects include the following:

An excessive amount of thujone oil can be the cause of many of these side effects, but some people are also overly sensitive to the potent volatile components of this herbal plant. [9]

Rate this article
Average rating 4.0 out of 5.0 based on 72 user(s).
Read This Next:
Popular Articles