The most important health benefits of bitterroot may include its potential ability to relieve pain, eliminate respiratory irritation, calm the nerves, purify the skin, detoxify the body, regulate blood sugar, and settle upset stomachs.

This small flowering plant may look less impressive, as it only bears a single white or pink flower, but the real value of bitterroot lies in its woody root, which has been consumed for both nutritional and medicinal purposes for hundreds of years. The scientific name of this herb is Lewisia rediviva, [1] and it is native to North America, where it can grow in rocky soil, grasslands, or forest environments. The fleshy taproot can be boiled, at which point it swells in size, and can then be dried, ground into a powder, or eaten as is. The high concentration of nutrients in the taproot, despite the bitter taste of the outer covering, made it very important in the nutrition habits of some Native American tribes.

However, it was also highly valued for its medicinal properties, which was largely due to the range and concentration of nutrients, as well as unique organic compounds found in the plant’s root. It is still widely used in the Native American community, but its popularity has spread to other practitioners and users of traditional medicine. If you can get over the bitter taste and have a strong enough stomach to handle this herb, then you can enjoy a wide range of health benefits from this impressive plant. Now, let’s take a closer look at the health benefits of bitterroot. [2] 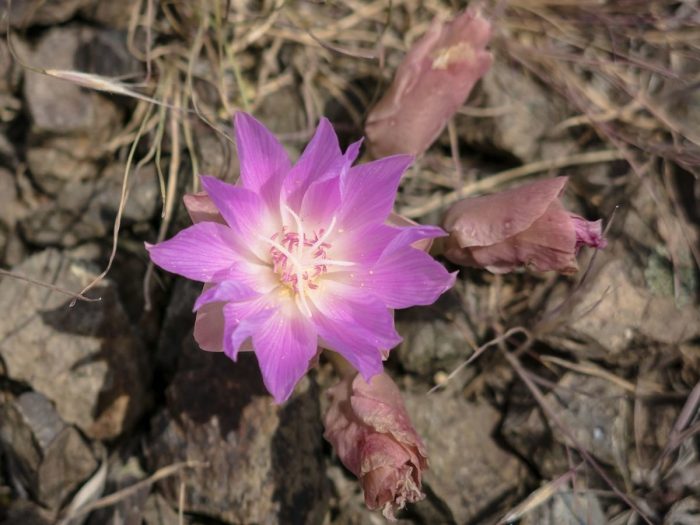 A beautiful bitterroot flower in a garden. Photo Credit: Shutterstock

Health benefits of bitterroot include:

One of the oldest uses of bitterroot was to slow the pulse and act as a soothing agent for the heart. It may also have an effect on circulation and blood vessel dilation, relieving excess stress on the cardiovascular system. This can help prevent the development of other conditions, such as atherosclerosis, heart attacks, and strokes.

Particularly in conditions of chest pain from heart conditions, such as angina, bitterroot was administered to quickly eliminate pain. As an analgesic substance, bitterroot was used for injuries, recovery from surgery, headaches, and general soreness of muscles throughout the body. [3]

May Have Anti-inflammatory Effects

In terms of inflammation, bitterroot was often used for inflammation of the lungs and respiratory system; it could effectively loosen phlegm and mucus, while also reducing irritation and painful inflammation, such as in the case of pleurisy. This also made bitterroot a popular remedy for those suffering from arthritis, gout, and various gastrointestinal disorders. The numbing effects of bitterroot, when eaten, can also soothe sore throats. [4]

May Help Calm the Nerves

One of the lesser-known uses of bitterroot was as a general tonic for the nervous system. Aside from relaxing the body and mind, it actually impacted the nervous system to prevent spasms, arrhythmias, and other nerve-related symptoms.

Some of the organic compounds found in bitterroot have been connected to cleansing the skin and protecting it against infection and decay. The potentially antioxidant elements of this powerful herb can stimulate growth and eliminate free radicals that speed up the aging process of the skin, keeping you looking young and beautiful for years. [5]

May Detoxify the Body

Bitterroot is also known as a diuretic, which can help to detoxify the body in case you have excess salts, fats, water, or toxins in your system. This protects the health of the bladder as well as the kidney and may promote the overall health and efficiency of your metabolism. [6]

Research has shown that bitterroot can have a positive effect on the symptoms of diabetics, helping them maintain a stable level of blood sugar in their system, preventing the peaks and troughs that can lead to dangerous diabetic shock. [7]

Although some people with overly sensitive stomachs claim that bitterroot makes them ill, in traditional medicine, bitterroot was actually used to soothe upset stomachs, even earning itself the nickname of “Indian Tums”, as Native Americans swear by chewing the leaves or eating the root flesh whenever they have any gastrointestinal issues. [8]

This is a very powerful herb, so in high concentrations, can have significant effects on the body. When you are first trying bitterroot, start with small doses, as the absorption of many of the herb’s components is variable in your digestive system, so be mindful of its effects on you. As always, it is a good idea to consult a medical professional before adding strong herbal remedies to your health regimen, and ensure that you are getting your herbs from an accredited herbalist.

Rate this article
Average rating 4.0 out of 5.0 based on 111 user(s).
Read This Next:
Popular Articles