A pinch of black pepper added to any recipe works as more than just a flavor enhancer. Often called the king of spices, black pepper is known to offer several health benefits while providing an excellent depth of flavor to any dish. The use of black pepper in the diet could help promote weight loss, improve digestion, relieve cold and cough, boost metabolism.

Since ancient times, black pepper is one of the most widely-traded spices in the world. It is not a seasonal plant making it available throughout the year. When dried, this plant-derived spice is referred to as a peppercorn. Due to its antibacterial properties, pepper is used to preserve food. Black pepper could also be an anti-inflammatory agent. 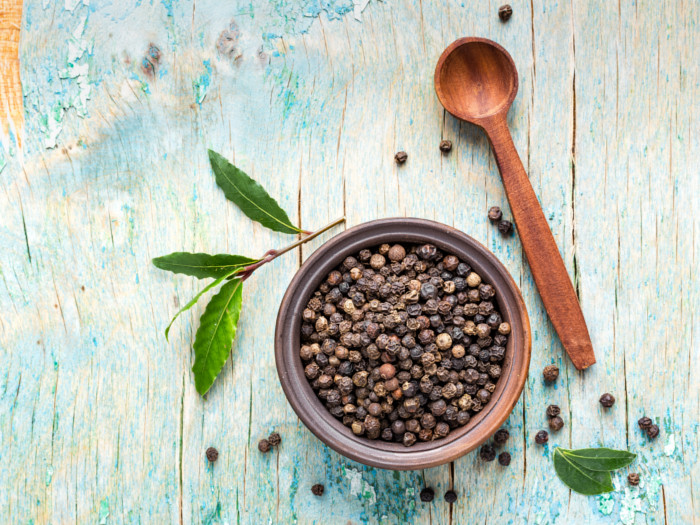 Black pepper also has dietary fiber and a moderate amount of carbohydrates and protein.

Black pepper may aid in weight loss and can also help in relieving sinus, asthma, and nasal congestion.  Let us discuss the health benefits of black pepper in detail.

Consuming pepper might increases the hydrochloric acid secretion in the stomach and thereby could facilitate digestion. Proper digestion is essential to avoid intestinal issues including diarrhea, constipation, and colic. Black pepper is also carminative and laxative.

Could Help In Weight Loss

The outer layer of peppercorn could assist in the breakdown of fat cells. Therefore, peppery foods are a good way to help you shed weight naturally. When fat cells are broken down into their parts, they are easily processed by the body and applied to other processes and enzymatic reactions, rather than settling in your body and making you overweight. Ayurvedic tea made with black pepper is one of the teas recommended for weight loss.

In Ayurvedic practices, adding pepper to tonics could help treat cold and cough. It may also provide relief from sinusitis and nasal congestion. It has an expectorant property that could help break up the mucus and phlegm depositions in the respiratory tract.

Soups and stews made with black pepper and other aromatic spices could be used to treat colds and coughs. The use has been found in Ayurvedic and Unani practices of medicine in India. 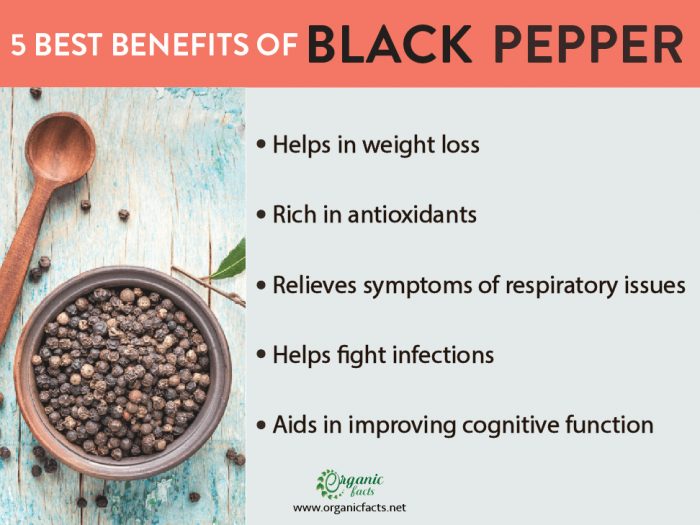 The antibacterial property of pepper may help fight against infections and insect bites. Pepper added to the diet could help keep your arteries clean by acting in a similar way to fiber such as scraping excess cholesterol from the walls, thereby helping reduce atherosclerosis.

Research published in the journal Phytomedicine showed that the compounds present in pepper could be active against Bacillus subtilis, Bacillus sphaericus, Staphylococcus aureus among gram-positive bacteria, and against certain gram-negative bacterial strains.

Research suggests that black pepper may help in transporting the benefits of other herbs and compounds to different parts of the body, thus could maximize the efficiency of the other foods we consume. That is why adding it to food not only makes it delicious but could also help in making the nutrients more available and accessible to our system.

Could Help In Improving Memory

Piperine, one of the key components of pepper, has been shown in numerous studies that it could reduce memory impairment and cognitive malfunction. The chemical pathways in the brain may appear to be stimulated by this organic compound. Early research demonstrates the possibility of pepper to benefit Alzheimer’s patients and those suffering other age-related or free radical-related malfunctions in cognition.

May Provide Relief From Peptic Ulcers

Yes, it is good for most. According to Ayurvedic medicine, black peppercorns may help prevent ear-aches and gangrene. It may also be good for treating conditions like hernias, hoarseness, insect bites, and is also commonly used to treat dental issues (tooth decay and toothaches). In ancient times, pepper was also administered to treat vision problems.