What is Saw Palmetto?

Saw palmetto is a fan palm native to North America, primarily located near the Eastern Gulf coasts. The scientific name of this unusual plant is Serenoa repens, and its unique characteristics make it the sole species found within the Serenoa genus. It is an extremely hardy and long-lived plant, with some saw palmetto plants living for over 700 years. The maximum height of this palm is only 10 feet, and they tend to grow in large bunches or clumps, typically among the roots of palm woods. [1]

The petiole of the plant is covered with sharp teeth or spines, which can break the skin, giving the plant its common name. The fruit, however, is the most valuable part of this plant, as it is a food source for both humans and animals. The traditional uses of this drupe fruit, which is reddish-brown or black in color, vary greatly, as the unique composition of its organic compounds, make it effective for treating a number of health conditions.

The fruit can be eaten in its natural berry form and saw palmetto extract, which comes from the fruit, can also be consumed in capsule, tincture, or tablet forms. There is a high concentration of sterols and fatty acids in saw palmetto extract, which is where most of its health benefits come from. The powerful compounds in saw palmetto can complicate the chemical pathways of other medications, so be sure to confer with a medical professional before beginning treatment with herbal supplements of this unusual plant. 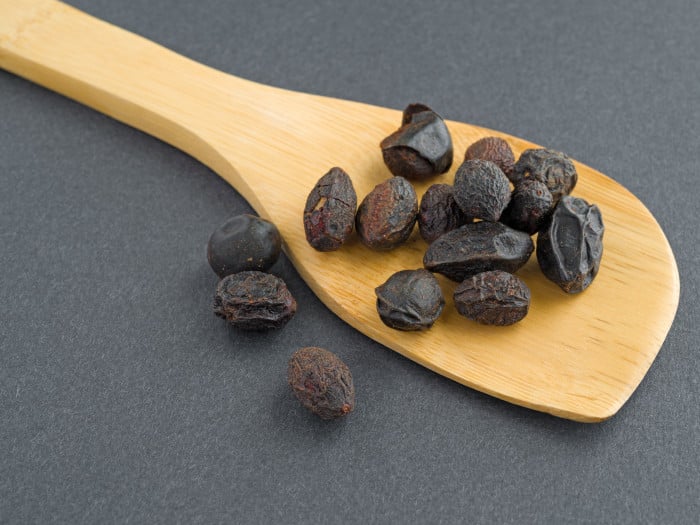 Saw palmetto is extracted from the berries of a type of palm tree. Photo Credit: Shutterstock

Benefits of Saw Palmetto & its Extract

Now, let’s take a closer look at the many health benefits of saw palmetto.

Due to its hormonal impact on the body, some men have begun using saw palmetto to stimulate hair growth as they age. Studies have shown a negative correlation between saw palmetto use and male-pattern baldness symptoms, so if your hair is beginning to thin out, consider some supplementation to wind back the clock. [2]

In terms of impotence, saw palmetto extract has long been known as a herbal treatment for curing impotence. The exact pathway that saw palmetto takes in terms of sexual organs and hormones is still somewhat unclear, but research has definitely piled up showing that it can boost your sexual performance and increase virility. [3]

Saw palmetto has been known to increase sex drive and libido in both women and men. Although the hormonal impact of saw palmetto primarily affects testosterone pathways, as a natural aphrodisiac, women can also get a bit more pep in their intimate steps with saw palmetto supplementation. [4]

The urinary organs can weaken with age, which is why incontinence is so common in the elderly population. Research suggests that saw palmetto has strong chemical components that can strengthen urinary organs to prevent incontinence, and also improve the health of the kidneys. If you are at risk of developing kidney stones or already suffer from them, saw palmetto supplementation can be a great way to prevent future issues or treat current ailments. [5]

According to a study led by Timothy J. Wilt, MD, MPH, saw palmetto extract can potentially reduce prostate enlargement by inhibiting dihydrotestosterone, which stimulates cellular reproduction in the prostate. This may lower the chances of developing prostate cancer, eliminating painful urination, and the discomfort that accompanies prostate issues. However, a study published in the Journal of the American Medical Association that summarized findings from researchers at 14 institutions across the U.S. and Canada said it could be a placebo effect. Further research is needed to check the potential health benefits of saw palmetto for men. [6] [7]

One of the more recent developments in the saw palmetto debate is its impact on muscle mass. Many bodybuilders and people engaged in serious gym time have turned to it as a workout supplement. Although research into saw palmetto’s impact on muscle mass and development is still ongoing, early reports show a correlation between the two. It makes sense, given the impact it has on testosterone in the body, which is responsible for muscle mass increase. But it should only be taken in moderation. [8]

This is certainly not the most popular use of saw palmetto extract or its supplements, but they have been known to boost the immune system, particularly for mild conditions such as colds, coughs, and sore throats. Headaches and migraine sufferers have also claimed that saw palmetto works as an anti-inflammatory agent and reduces pain and discomfort. This is in line with saw palmetto’s other anti-inflammatory activities in the body, primarily in the urinary tract and gut. [9]

Word of Caution: Saw palmetto appears to be very beneficial for overall health and wellness, particularly in terms of male sexual and reproductive health, but it can also negatively interact with blood thinners and prostate medication, so always consult with your doctor before adding these supplements to your daily or weekly regimen. Side effects of saw palmetto may include dizziness, nausea, diarrhea, and constipation.

Rate this article
Average rating 3.9 out of 5.0 based on 375 user(s).
Read This Next:
Popular Articles