Human nature is such that it is never satisfied or contented. It is always looking for more. Therefore, we started looking for a more stable form of oil which would be more beneficial for health as well, in addition to having a very long shelf life and all the qualities of coconut oil. [1]

What is Fractionated Coconut Oil?

The MCT’s in fractionated coconut oil has been associated with a range of benefits. Let’s have a look at them in detail.

Consumption of MCT oil as part of a weight-loss regime improved weight loss according to a human study report. This study was published in The American Journal of Clinical Nutrition. Small changes in the quality of fat intake are useful to promote weight loss. [3]

A 2018 study provides the first evidence that MCT oil as a food supplement, preserves impairment in exercise performance and muscle function. It also reveals the novel role of MCT in exercise and fitness, providing evidence for treating muscle dysfunction and exercise impairment in patients by taking MCT as a dietary supplement. [4]

According to a case study report in Neurological Medicine journal, it can be concluded that MCT oil supplementation to the regular diet provides better seizure control in selective patients. It is a more tolerable alternative to the standard ketogenic diet. [5]

For this, hydrolysis of coconut oil is first carried out. Then, the product is passed through steam distillation to obtain it. The result is a thin oil full of medium-chain triglycerides.

Fractionated coconut oil comes in three different forms for three different uses. Being thin and stable, it has plenty of uses which can be broadly categorized in the following applications.

Fractionated coconut oil is widely used in the preparation of soaps, lotions, ointments, and other cosmetics. It is used as a carrier oil since it facilitates the absorption of other oils and herbal extracts. It is also used in a number of hair care applications.

Well-known as MCT oil, it is used due to its antiseptic and disinfectant properties and is used as a common dietary supplement. It is also used in weight loss and regulating cholesterol levels. [6] [7]

Found in the form of liquid coconut oil, it is edible and is used in cooking, as it does not go rancid easily. 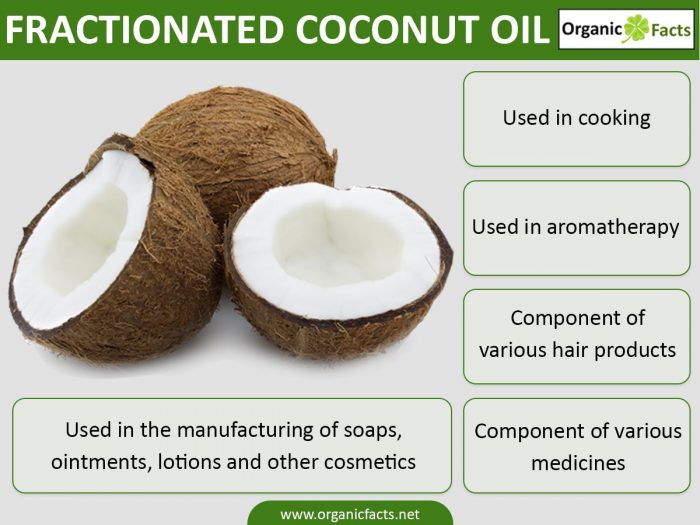 Since fractionated oil involves a lot more processing (such as hydrolysis and steam distillation) than ordinary coconut oil, it is slightly more expensive. However, the additional cost does have its own benefits and justifications. Keeping in mind it’s extremely long shelf life, stability, and rancidity-resistant properties, it is well worth the price you pay.

Rate this article
Average rating 3.8 out of 5.0 based on 258 user(s).
Read This Next:
Popular Articles