The most interesting health benefits of cordyceps include its ability to improve respiratory health, increase oxygen uptake, boost heart health, and detoxify the body. This fungus is also found to help prevent certain types of cancer. It slows the aging process, increases energy, and improves the immune system.

The name cordyceps describes a genus of fungi that includes more than 400 unique species of parasitic types. Fungi are essential parts of many ecosystems, but this particular genus also has a great deal of importance for people, as it has been traditionally used in herbal medicine for centuries. These “club head” mushrooms have a wide range of chemical components and compounds that make them valuable in traditional medicine, as they are globally available and relatively inexpensive. The widespread of the Cordyceps genus makes it desirable. Cordyceps fungi varieties contain certain biochemicals that mimic current pharmacological substances in a natural way. [1]

As the popularity of cordyceps increased so did the access and variety of the herbal supplements. Around the world, you can utilize it in liquid extracts, tinctures, powders, and capsules, but the mushrooms themselves, when dried, look like long brown/orange fingers. You can also buy the whole cordyceps in certain stores and add it directly to soups for flavor, or brew tea from the dried and powdered fungi. The origin of most of the species seems to be Asia, prior to its global spread, which is why it is so frequently found in the traditional medicines of that region. [2] 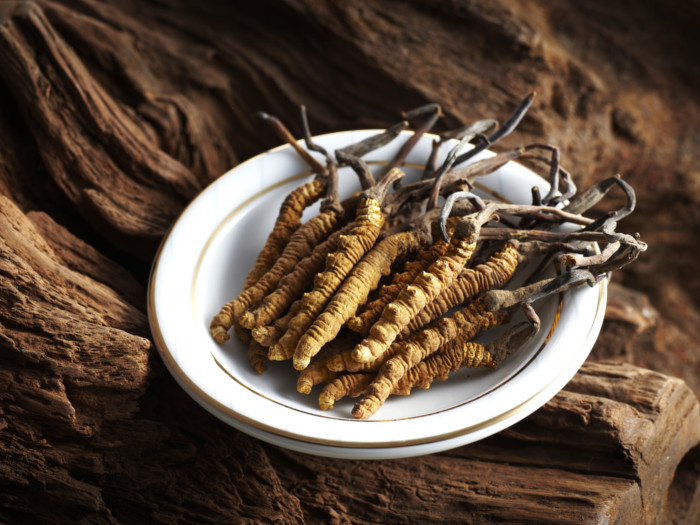 Cordyceps is a fungus that lives on certain caterpillars in the mountainous regions of China. Photo Credit: Shutterstock

Let’s take a closer look at the health benefits of this fungi.

One of the most undeniable health benefits of cordyceps is its ability to significantly boost energy levels. It has long been known among athletes for the bursts of energy it can provide. It increases the amount of oxygen uptake in the body and enhances cellular energy production, thereby providing that extra push for people who need a shot of energy. [3]

Research on the effects of cordyceps has come up with many exciting results, especially in relation to cardiovascular health. One study showed that patients given a powdered supplement of cordyceps were significantly less likely to suffer heart failure. This is mainly due to the anti-inflammatory and antispasmodic properties of the herb, which can prevent heart arrhythmias and other complications. [4]

Cordyceps is able to increase the amount of oxygen taken in by the lungs, and while this is helpful for athletes, it is also beneficial for those suffering from respiratory conditions, such as asthma or chronic bronchitis. By increasing your oxygen intake, you help prevent respiratory distress and weakness. Also, increasing oxygen levels help oxygenate the body’s extremities better, so the organ systems as a whole run more efficiently. [6]

People are always looking for the next big solution in the battle against cancer, and some of the unique biochemical compounds found in cordyceps certainly fit the bill in that respect. A collaborative research by the National Yang-Ming University, China suggests that there have been direct correlations between the consumption of Cordyceps sinensis and tumor size reduction. With the antitumor activity, it can help slow the spread of cancer and work as a great aid for people suffering from this disease. [7]

Cordyceps are a source of very beneficial bioactive compounds which, according to a 2015 study are able to decrease cell proliferation and induce apoptosis in lung cancer cell lines. [8]

Research conducted by a couple of medical institutes at Korea found that the extract of cordyceps is very potent in inhibiting the growth of the tumor and can help in slowing the spread of colorectal cancer. [9]

Very few research studies are out but one 2008 paper suggests that cordyceps help in reversing the side effects of cancer therapy like leukopenia. Leukopenia is a condition where the white blood cell count (WBC) in the body decreases, which actually makes you prone to infection. Studies on human subjects are yet to be done but the results look very promising. [11]

Cordyceps directly stimulate the production of NK cells (Natural killer cells), which are one of the body’s first lines of defense against infection and illness. These immunoprotective effects help against a wide range of diseases, from cancer to the common cold and everything in between. [12]

Cordyceps have powerful concentrations of anti-aging compounds that can help rejuvenate the skin, eliminate dead or dying cells, and improve the appearance of blemishes, wrinkles, and age spots, effectively shaving years off your life! [13]

Cordyceps impact sexual dysfunction in men. Numerous studies have shown that men suffering from low levels of sexual energy or poor libido saw clear improvement after adding its herbal supplements to their diet. [14]

Although the exact chemical pathway of this is unclear, studies have shown that kidneys health improve notably after only one month of regular cordyceps herbal usage. [15]

Word of Caution: Cordyceps does have a small effect on lowering blood sugar levels, which can be dangerous for diabetics, so they should avoid its use. Also, as a blood-thinner, it shouldn’t be taken before or after surgery, by those already taking blood-thinners or suffering from bleeding disorders.

Rate this article
Average rating 3.9 out of 5.0 based on 518 user(s).
Read This Next:
Popular Articles