Don’t let the beautiful flowers of the genus Datura deceive you; they might have a lot more to offer than something pretty to look at. Datura is a genus that comprises nine different species of poisonous plants. They are commonly known as moonflowers or angel’s trumpets, but whatever you call them, these flowers have an interesting secret. All species are poisonous to a certain degree, but this has also been turned into a traditional use as an intoxicant and a hallucinogen. While large quantities can be toxic, small quantities when appropriately administered can also have medicinal effects. Datura is commonly consumed in conjunction with cannabis (smoked) or is added to wine or alcohol to increase the potency. The various alkaloids, minerals, and organic compounds in datura are what makes the effects of this plant so interesting. [1]

These flowers can be found throughout North America and Mexico, and there is also a high concentration of growth in North Africa. While mainstream medicine still labels this flower and its derived supplements and uses as unproven, centuries of traditional practices beg to differ. You can still find practitioners and herbalists throughout the United States and much of the world who will suggest very limited amounts of datura to be used to treat a wide range of conditions.

Let’s take a closer look at some of these fascinating health benefits of datura. [2]

When you use datura in the same way as cannabis, namely rolling and smoking it, it may have certain antispasmodic effects on the body. This might particularly be effective for the treatment of asthma, as it may calm the respiratory tracts and prevent them from closing up and inducing coughing. This antispasmodic may have effects on the rest of the body as well, such as relaxing muscles. [3] 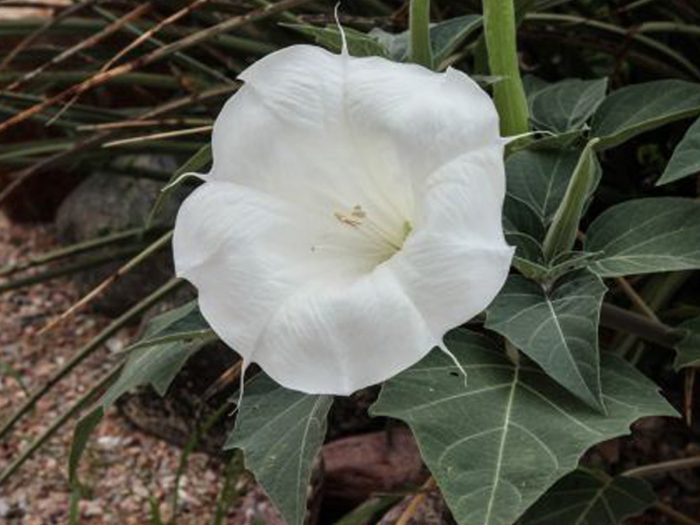 One of the most notable effects of datura might be its ability to improve mood and reduce stress. By causing the release of certain hormones into the body, it may help relieve stress and calm the mind. For those who regularly suffer from stress, that build-up of hormones in the body can be dangerous. Smoking small amounts of datura might have traditionally been used to improve mood and relieve symptoms of depression. [4]

May Be Useful For Fever Treatment

The fruit of the datura can be used to reduce certain types of fever. Traditionally, it might have been effective for the treatment of malaria, a problem that is still present in many places in the world. The fruit can be directly consumed after being burnt. [5]

By calming the body and mind, it may also relax the cardiovascular system. This might help people who suffer from heart arrhythmias or palpitations, as well as may help reduce blood pressure and lower the chances of atherosclerosis, heart attacks, and strokes. [6]

One of the most popular uses of datura in traditional medicine might have been as a boost for sexual energy, libido, and fertility. Although the exact pathway isn’t understood in this particular pathway, smoking datura has been connected with increased sexual energy in the past. By immersing the seeds into water or milk, you might also increase circulation to the genitals, which increases fertility and the health of the sperm. [7]

May Aid In Hair Care

If you suffer from male pattern baldness, then you might easily create a salve for the hair that can be applied to boost hair health. It may help stimulate the growth of new hair and the maintenance of follicle beds so they don’t stop producing or holding hair. The highly potent juice for baldness should not be consumed, as it is such a high concentration. [8]

If you are suffering from a particularly painful pregnancy or delivery, the application of datura in a topical way might prove to be very helpful. Following delivery, once your baby is no longer dependent on your body directly, you may consume small amounts of fruit and even smoke this plant for pain relief and mental calm. [9]

There might be a decent amount of ascorbic acid found in datura, and additionally, the high concentration of antioxidants may contribute to the strength of the immune system. It may help stimulate the production of white blood cells and neutralize various free radicals throughout various systems of the body. [10]

The sedative qualities of datura might have often been suggested as a sleep aid. By soothing the nerves, inducing healthy hormonal release, and reducing inflammation and pain, datura may effectively deliver restful, undisturbed sleep for people suffering from insomnia or other sleep disorders. [11]

Word of Caution: It cannot be stressed enough that datura is a poisonous plant, and consumption or use of it without proper advisement is not recommended. Excess or improper consumption can cause anything from nausea, dizziness, fatigue, and hallucinations to more serious effects, such as permanent mental imbalances and even death. Use of datura is restricted in some places and countries such as the UK. Always speak to a medical professional or trained herbalist before using a new natural remedy, especially one as powerful as datura!

Rate this article
Average rating 4.2 out of 5.0 based on 202 user(s).
Read This Next:
Popular Articles