What Is Konjac Flour & How To Use It

Konjac flour is the magic ingredient in the magical shirataki noodles, which are so popular with dieters for their low-to-no calories and carbohydrates. If you don’t identify with this, you probably remember the one-slurp lychee cups which were easily available till a few years ago. A fruit jelly cup with a couple of nata de coco cubes in the center – the almost lychee-like jelly consistency is achieved without gelatin, with only konjac flour. Where does this multifaceted, humble ingredient come from? Let’s find out.

What is Konjac Flour?

Konjac flour is sourced from the konjac plant. Konjac, scientifically known as Amorphophallus konjac, is native to Yunnan province in China and is commonly found in warm tropical and subtropical regions of Asia such as China and Japan.  It is also known as voodoo lily, devil’s tongue, elephant yam, or konnyaku potato. Irrespective of the names such as yam and potato, the plant bears no relation to these.

The flour is obtained from the underground stem of the plant, also known as the corm. It is the result of processing the dried, mature corm into a powder, which can then be used for various purposes.

The flour has been in use in Japan since as early as the sixth century. However, this has been primarily for medicinal purposes. The proportions of popularity it experiences today is unprecedented. [1] 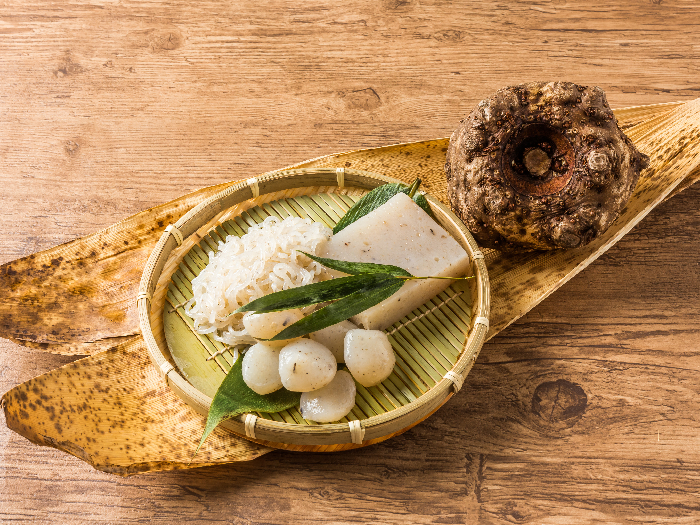 Konjac flour is used as a thickening agent in jellies. Photo Credit: Shutterstock

How To Use Konjac Flour?

Today, konjac flour is mainly available as pasta or noodles. The pasta and noodles are being hailed by many as a diet-friendly food for its low-calorie and low-carbohydrates content. The noodles are made of konjac flour, water, and calcium hydroxide, thus maintaining the nutritional profile of the flour. Konjac flour products are primarily rich in glucomannan, which is the magic weight loss ‘nutrient’ present in this flour.

Glucomannan is a water-soluble dietary fiber that can swell up upon contact with water. Since it can pose a choking hazard, it is advisable to have it with ample amounts of water. While it is used as a standalone thickener and emulsifier, it is also being marketed as a dietary supplement.

The fruit jelly made from konjac flour has now been banned or restricted in several regions across the world, for it presents a choking hazard and has to be chewed properly. Multiple patient reports have emerged of minors and infants being rushed to the emergency department for choking on these treats. [2] [3]

Konjac flour or glucomannan has not been deemed unsafe for human health, apart from choking hazard notice. However, they might not be as helpful for weight loss as it is made out to be. A paper published in the Journal of Obesity notes that the use of glucomannan supplements over the span of eight weeks did not promote weight loss or changes in body composition. [4]

Another study published in the journal Nutrition found some evidence that short-term glucomannan use could reduce body weight, but not BMI. Since konjac flour products are mostly fiber and water, they should help keep you full. However, it might not be the best idea to base your diet on these noodles alone since they are not nutritionally fulfilling. [5] [6]

While drastic weight loss efforts might not be supported by konjac flour products, these could help with diabetes management. A research article published in the Journal of Diabetes Research found that konjac-inulin composition, as diet supplementary, can have a protective effect on type 1 and type 2 diabetes. [7]

Word of caution: Konjac flour is an age-old product but wasn’t used as a primary food source until recent years. While further studies can better determine its best benefits for human health, it is advisable to not make it the center of your diet. It is important to beware of the choking risk it presents. Furthermore, if you develop an allergic reaction to this product, it is best to consult your doctor at once.