Many people wonder about the difference between olive oil and extra virgin olive oil, and the details that separate these similarly named oils may surprise you!

When you look at a shelf of olive oil, it can also be tough to know the difference between olive oil and extra virgin olive oil, but before you make your choice, knowing how they differ is critical!

Olive oil and extra virgin olive oil differentiate on the basis of quality, oleic acid content, color, flavor, and purpose. Let’s take a look at the other differences in detail below.

When you see a container of olive oil, you are likely looking at either pure or light olive oil, both of which have been extensively chemically processed, including potential bleaching and deodorizing. This results in olive oil that is a lighter color and doesn’t have the same strong aroma of olives. The smoke point on olive oil is also higher than extra virgin olive oil, making this a more popular oil for frying and baking, as it doesn’t imbue the food with that olive flavor. [1]

In terms of health benefits, however, olive oil is notably less powerful than extra virgin olive oil. When you chemically process and heat the oil, some of the polyphenolic compounds and omega-3 fatty acids are denatured under chemical distillation or extreme temperatures, making the oils less nutritious, albeit more useful in cooking. [2] 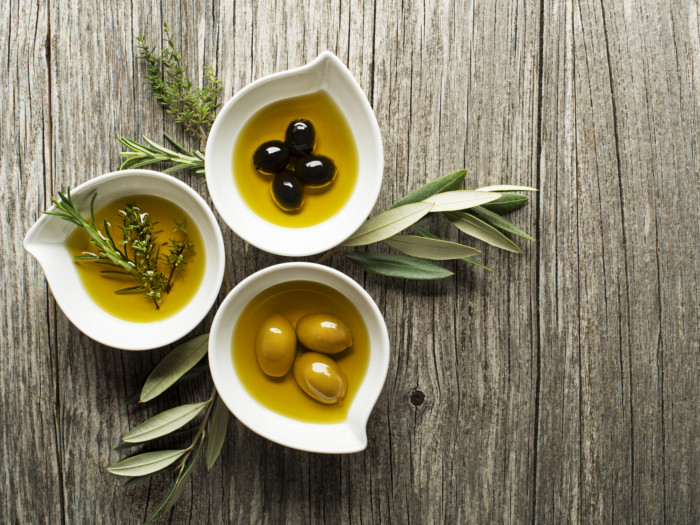 Extra virgin olive oil is cold-pressed from untouched olives, and are not exposed to high temperatures or any chemical processing. It is simply pressed through mechanical means. This preserves the many nutrients and active ingredients in the oil, including valuable antioxidants that can provide health benefits, and may help in reducing the risk of developing chronic disease. [3] [4]

Extra virgin oil also has a strong taste and flavor, and is commonly used as a dressing or is included in marinades and sauces, rather than acting as a frying or baking oil. Since extra virgin olive oil has a lower smoke point than regular olive oil, it can be less effective at higher temperatures, making it slightly less versatile as a cooking oil.

Rate this article
Average rating 4.2 out of 5.0 based on 25 user(s).
Read This Next:
Popular Articles