There is something that bothers many coffee lovers around the world, and that is the presence of caffeine within this delightful and delicious drink. Furthermore, like all other crops, there might be toxic chemicals creeping into the coffee from various artificial fertilizers and pesticides used to help them grow. This keeps people from enjoying their cup to its fullest since they know very well that both caffeine and the chemical residues in the coffee can be harmful to their health.

However, is it possible to enjoy coffee without caffeine, fertilizers, or pesticides? Yes! Of course, it is! There is a coffee called Organic Decaf Coffee, which has the solution to all of those problems. It contains neither caffeine nor those toxic chemical residues discussed above. The question is, how did coffee like that come into being? What exactly is it? Where is it available? There are several questions whose answers have yet to be found out. But let’s explore a bit more!

Most of you might be familiar with the term “Organic” and understand what it means. For those who are not, let me give you some hints. The most general interpretation of the recommendations laid down by various governing agencies, such as the USDA or NPOP, that must be followed by a product labeled as “organic” is that it should contain neither artificial or synthetic substances or chemicals (that means, no chemical fertilizers or pesticides can be used while growing them and no chemicals can be used while processing them). Furthermore, the crop should not be obtained from or contain Genetically Modified Organisms. For products like coffee, the crop or the product cannot be treated with sewage sludge nor be subjected to any kind of radiation. They cannot be packed in packets from which they can be chemically contaminated (like metallic salts, colors, and other chemicals from the pack dissolving into the contents. Any coffee that fulfills above requirements can be accurately called Organic Coffee. 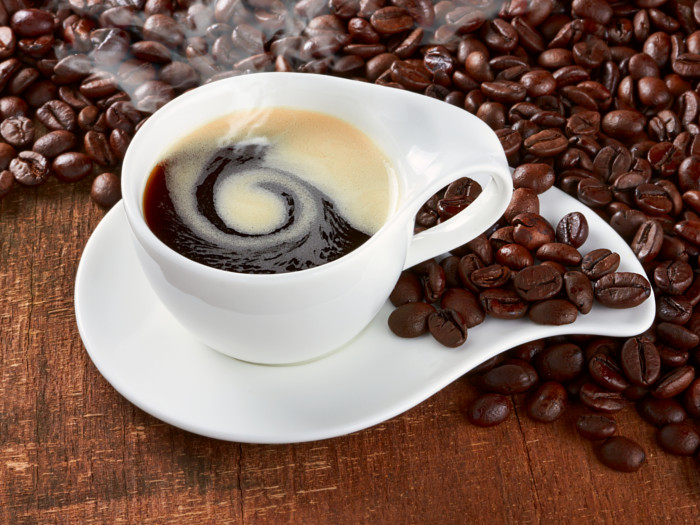 Decaf coffee can help if you are trying to cut down on your caffeine consumption. Photo Credit: Shutterstock

Organic Decaf Coffee is a shortened version of Organic Decaffeinated Coffee, which means any organic coffee from which caffeine has been removed. Now, this caffeine can be removed by any of the following methods, but all of them are not necessarily organic.

This is the only organic process known for the decaffeination of coffee. So, only the coffee decaffeinated in this way can be called Organic Decaf Coffee. This process uses a lot of water and is basically same as that used for decaffeinating tea, i.e. the green coffee beans (roasted ones will not do) are repeatedly soaked in hot water and made to pass through a carbon filter (made of charcoal, which is organic). This pulls out the caffeine from the raw beans but does not harm the flavor, except in the first run, due to the carbon filter. This process is organic and can remove above ninety-nine percent of the caffeine from the beans if it is repeated several times. [1]

Note: You can also try decaffeinating the green coffee beans at home with a similar method to the Swiss Water Method discussed above by repeatedly soaking the beans in hot water and then throwing the water away. The more you repeat this, the more caffeine is removed. However, this also robs the beans of their flavor by a considerable amount.

This is one of the oldest methods of decaffeinating coffee, which involves treating the coffee beans with salt water and benzene. That is why it cannot be called an Organic Process. Furthermore, treating the beans with a salt solution and benzene does great damage to their flavor and taste, for obvious reasons.

This process is basically the same as the Industrial Direct Process discussed above, with the difference being that, in this case, the beans are not directly rinsed with Methylene Chloride or Ethyl Acetate. Instead, the beans are removed after being soaked in hot water and the water is then treated with either of these two compounds to remove the caffeine in it. This process can churn out either Inorganic or Organic Decaf Coffee, depending upon the type of Ethyl Acetate used in it.

In this process, already steamed coffee beans are either soaked in (technically speaking, subjected to) liquid Carbon dioxide (CO2 gas liquefies under high pressure) or Carbon dioxide is passed at high pressure through water containing soaked beans and is then subjected to carbon (charcoal) filters. This method can be called organic because Carbon dioxide is considered an organic gas (even if produced synthetically) in scientific terms. Therefore, you can go ahead with this process without worrying.

In this process, the coffee beans are first soaked in hot water (some caffeine is removed first hand), removed, and then soaked in coffee oil. The triglycerides present in coffee oil pull out the caffeine from the surface of the beans (the caffeine surfaces due to the action of hot water). Thereafter, the beans are removed and dried. This method preserves the flavor and the taste of coffee to a large extent. The oil that remains can be reused after the removal of the caffeine from it. This method of removing the caffeine from the oil before reusing is what determines whether the coffee can be called organic or inorganic. If the oil is decaffeinated using chemicals (Methylene Chloride etc.), then it is no longer organic. If some organic method like charcoal filters is applied for this purpose, then it can be called organic.

Note: Check out the above fact carefully if you are buying Organic Decaf Coffee. Do not proceed if you are not sure.

Caffeine is an external stimulating agent and can be harmful to human health in the long run and when taken at an overdose level. It can result in a wide range of serious troubles like a chronic headache, chronic fatigue, annoyance, lung disorders, high blood pressure, nervous disorders, anxiety, insomnia, and a lack of appetite. Caffeine found in coffee is much higher than that in tea, so it becomes important to decaffeinate it. Decaffeinated coffee lets you enjoy the remarkable flavor and taste of coffee without posing a major risk to your health.

Leaving that organic part (which is always beneficial and has no harm in itself), the Organic Decaf Coffee benefits you unless you drink too much coffee every day. Despite being decaffeinated (although the amount of residual caffeine depends upon the method used), there is still some caffeine left in coffee, so indiscriminate drinking can introduce the same amount of caffeine that you wanted to avoid. Say, ten to fifteen cups of highly decaffeinated coffee is equivalent to two cups of fully caffeinated coffee. Therefore, it benefits you as long as it is drunk in moderation.

Except for being a bit higher in price than normal coffee, decaf coffee seems to have no demerits or natural disadvantages in itself. It is far healthier than normal coffee and is environment-friendly too since no toxic chemicals (fertilizers, pesticides, weedicides, reagents etc.) are used in its production and processing. However, the method of decaffeination used may sometimes affect the taste and flavor adversely and many people are of the opinion that decaffeinated coffee does not taste good. This sounds true to some extent since it is evident that repeated treatment with hot water will drain out some natural oils, sugar, volatile oils and other ingredients from the beans along with the caffeine that do provide coffee’s flavor.

It is widely available these days throughout the world. Still, if you are not able to find it within your area, then place an order on the Internet, but only after thoroughly studying for the certification for the organic product, the process of decaffeination used, and manufacturing date.

Both regular decaf and Organic Decaf Coffee have very good markets all over the world since many people prefer this variety for health reasons. This trend is growing.

Your Call: Drinking Organic Decaf Coffee and promoting it is beneficial, both in terms of health as well as for the environment. So, if you are a moderate coffee drinker, this coffee will surely do you a lot of good. If you are a heavy drinker, then you will also be benefited from the organic part of the coffee, if not from the decaffeinated portion. So, enjoy coffee any way you want and encourage others to take up this healthy practice. Cheers!

Rate this article
Average rating 4.0 out of 5.0 based on 34 user(s).
Popular Articles