Using the correct palm shortening substitutes means completing your recipes without having to run to the store for this somewhat exotic ingredient.

Palm shortening is palm oil with some of the fat removed, which makes it into a semi-solid vegetable oil product. It is popular for cooking, as it is not hydrogenated like vegetable shortening, and contains no harmful trans fat, which is a consequence of that process. It also has a very high smoke point, which makes it useful for deep frying and grilling. As a fat in pastry and baking, it is used for making flaky bread and crusts.

However, in recent times, palm oil has picked up a bad reputation for harmful industrial environmental practices. Additionally, it can be hard to find palm shortening in grocery stores depending on where you live. If you’d prefer to use a substitute in your baking, there are a few great options such as coconut oil, butter, margarine, and lard among others.

Coconut oil is a healthy alternative to palm shortening, with lots of antioxidants and MCTS, which are considered “good” fats. However, it will add a coconut flavor to whatever you’re making. This is something to think about, especially if you are making pie crust, as the resulting dough flavor may clash or compliment your pie filling. [1] 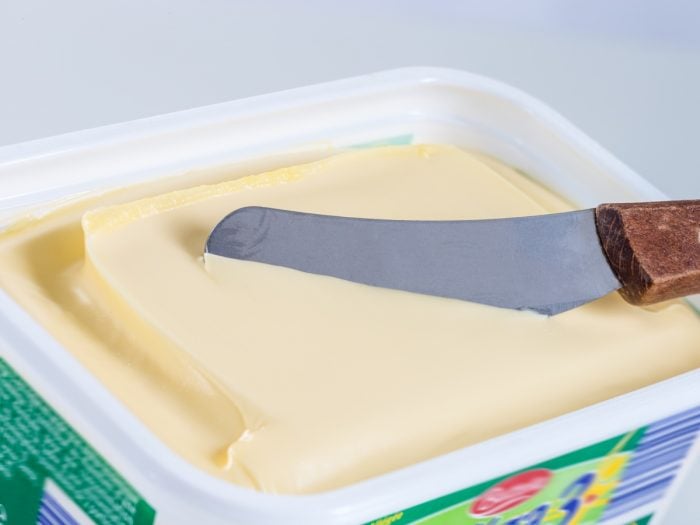 What do you prefer using on your toast – butter or margarine? Photo Credit: Shutterstock

Butter is a good substitute for palm oil shortening if you are not avoiding dairy. It adds rich flavor to any recipe, although certainly a fair amount of calories as well. However, if you are making the crust, keep in mind that butter crust will not be as a flaky as a shortening crust, and will brown darker. [2]

Margarine is a non-dairy butter replacement that is often mostly made of vegetable oil. There may even be palm oil in your margarine. Margarine will also add a rich butter flavor to all your recipes. However, it is designed to have less fat than butter, and therefore certainly less than shortening. You may need to use more, or add in vegetable oil, to make up for the fat loss. Without additional fat, the structure of your baking will be softer. [3]

Lard refers to any animal fat that has been rendered for cooking. Lard bought in a grocery store will be hydrogenated, which means that it will contain trans fat. Some people choose instead to make their own by buying animal fat at the butcher and rendering it on the stovetop themselves. Lard will often taste very much like meat, which should be taken into account when substituting. Obviously, this is not appropriate as a vegan-friendly substitute. [4]

Rate this article
Average rating 3.8 out of 5.0 based on 22 user(s).
Read This Next:
Popular Articles