Despite the name, watermelon stomach is not a pleasant medical condition, by any means, and due to its severity, it is important to be able to recognize the symptoms and causes of this unusual disorder.

Diagnosing watermelon stomach can be achieved through various tests, such as an endoscopy, biopsy, and ultrasound, among others.

This approach to diagnosis may involve sending a small tube with a light and camera into the gastrointestinal system to see whether the characteristic stripes and bleeding are present in the stomach. [1] 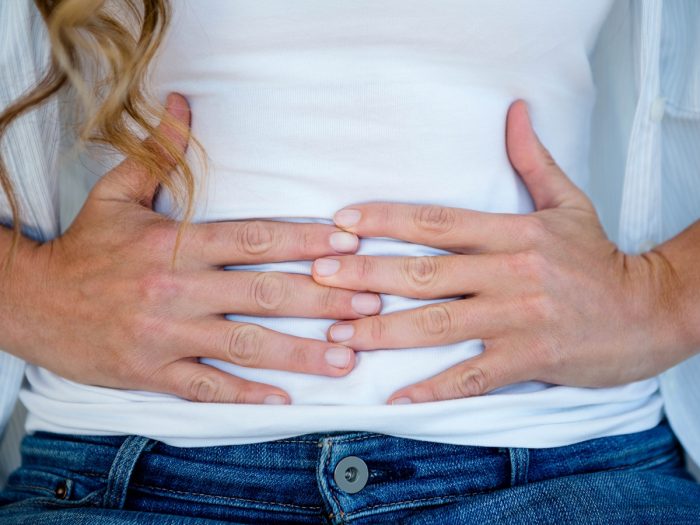 Bloating is when your belly feels swollen after eating. Photo Credit: Shutterstock

A biopsy may consist of removing a small piece of tissue from the affected part of the body to determine whether it has been infected by a specific disease.

An ultrasound allows doctors to image the final section of your stomach, where it can identify swelling and dilation of blood vessels that signify this condition.

To eliminate watermelon stomach, the best options may include surgery, certain medications, and even blood transfusions, as well as dietary alterations.

Medication – Corticosteroids have been shown to be somewhat successful, as well as hormone therapy, to minimize the symptoms of this condition.

Diet – You should change your diet to avoid harsh, acidic foods. Eating a lot more soups and smoothies can give your stomach a break; you should also avoid caffeine and alcohol until the symptoms subside.

Transfusions – If a significant amount of blood has been lost, transfusions may be required to offset the blood loss. [3]

Rate this article
Average rating 4.8 out of 5.0 based on 8 user(s).
Read This Next:
Popular Articles