Apricots are a popular and delicious fruit but many people don’t realize that the apricot seeds inside apricots are also a great source of nutrients and surprisingly useful in several ways.

What are Apricot Seeds?

Apricot seeds are found at the center of the apricot fruit (Prunus armeniaca), which is considered a stone fruit. When you eat an apricot, you will eventually reach the pit at the center of the fruit, and the seed (or kernel) is found within the shell of that pit. These seeds are the subject of some debate, as they contain some unique compounds, some of which have powerful effects on human health but may also pose a significant danger. Most notably, apricot seeds contain vitamin B17 – more commonly known as amygdalin or laetrile – which studies have shown can have anti-cancer and anti-inflammatory properties (Chen Y et al., 2013). However, other studies disagree with these findings, arguing that apricot seeds are too dangerous to consume, particularly in large numbers. [1] [2]

Vitamin B17, when combined with high levels of vitamin C, can be chemically altered into cyanide in your body, which can be very dangerous. While the body can process small amounts of cyanide, eating an entire bag of apricot seeds exceeds the lethal level of cyanide for an adult man. The amygdalin is converted into cyanide in the stomach, which then moves throughout the bloodstream, potentially causing major side effects or death. For that reason, commercial sales of apricot seeds are largely restricted around the world, although they can be purchased online. [3]

Apricot seeds contain high levels of amygdalin (vitamin B17) as well as significant levels of vitamin E, pangamic acid (vitamin B15), as well as small amounts of fat and no cholesterol. In a half-cup of apricot seeds, there are 14 grams of carbohydrates, most of which are made of dietary fiber (10 grams). There are also 14 grams of protein in a half-cup of these seeds, along with an average of 260 calories.

Vitamin E is an important antioxidant that has been linked to improved health of the skin. Vitamin E functions to reduce oxidative stress in the skin, which is caused by free radicals and can lead to wrinkles, age spots, and blemishes. Vitamin E also works as a moisturizer and can improve the general appearance and tone of the skin, even boosting elasticity as we age. There is a moderate amount of vitamin E found in apricot seeds. [4] 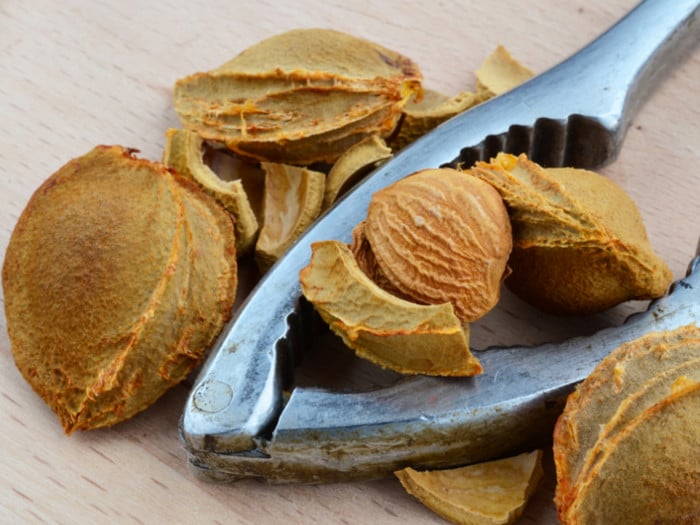 Apricot kernel is the inner part of the seed of the apricot fruit. Photo Credit: Shutterstock

Although amygdalin gets most of the attention in apricot seeds, there is another unique compound in these seeds that is connected to a reduced risk of heart disease. Pangamic acid is not found in many foods, but it is closely associated with reducing strain on the cardiovascular system, particularly in terms of ischemic heart disease. Some studies have also found that regular consumption of small amounts of apricot seeds can lower blood pressure, which can lower your risk of atherosclerosis, heart attacks, and strokes. [5]

Some research has shown immune-boosting properties of apricot seeds, as they can stimulate the defensive cells of the body, in addition to their antioxidant potential, which can reduce strain on the immune system. [6]

A good amount of anecdotal evidence links apricot seeds to improved respiratory health, as they can cut through mucus and phlegm deposition in the respiratory tracts. The active ingredients in these seeds act as an expectorant and will also make the body less sensitive to allergens, which can reduce the severity of asthma attacks and inflammation in the throat. [7]

There is a decent amount of dietary fiber in apricot seeds, which means that this tasty snack (either sweet or bitter varieties) can help improve digestive function. Dietary fiber can stimulate peristaltic motion in the gut, making bowel movement more regular, and reduce symptoms of constipation, bloating, cramping, and diarrhea. This dietary fiber can also improve nutrient uptake efficiency in the gut. [8]

These seeds have a notable amount of protein, which is an essential part of your daily diet. A half-cup of these seeds contains roughly 25% of the necessary protein per day for women and roughly 20% of the required amount for women. This can increase muscle growth and general repair around the body, as protein is necessary to create new cells and tissues in the body. [9]

If you are struggling to maintain cholesterol levels, apricot seeds can certainly help, as a result of the dietary fiber found in this snack food. Fiber can help to scrape excess cholesterol from the cardiovascular system and strengthen heart health, lowering your risk of atherosclerosis, heart attacks, and strokes. [10]

There is a significant amount of usable calories and energy in these seeds, and while eating an excessive amount of these seeds can be bad for your weight gain and your risk of cyanide poisoning, a moderate amount can provide a rapid burst of energy and a boost to the metabolism. [11]

Most of the discussions regarding apricot seeds surround its proposed use as an anti-cancer agent. While certain studies have found that the presence of vitamin B17 (amygdalin) does have anti-tumor effects, other researchers have found no notable improvement of cancer symptoms when a controlled amount of this substance is either consumed or injected. [12]

Interestingly enough, laetrile has been used for medical purposes for more than 160 years, dating back to Russian medical roots. In the 20th century, it has gone through periods of popularity and restriction, and the seeds are currently not allowed to be sold or transported across State Lines (in the United States), due to their potential toxicity. However, these seeds and their extract can still be found in certain parts of the world and anecdotal evidence for their effect on cancer is widespread (The Internet Journal of Health, 2018). [13]

Most experts and doctors will not prescribe this sort of risky treatment but many people still seek out this natural cure. The most important thing is to never consume apricot seeds in excess. Estimates for dangerous levels of consumption range from as few as 30 seeds to as many as 500, depending on body size, weight, and numerous other factors.

Apricot seeds have various medicinal, culinary, and cosmetic uses but any use of these seeds should be done cautiously. Medicinal uses were explained above, and the culinary uses typically revolve around extracting the oil from these seeds. The oil can be used to fry certain foods, or added to desserts for flavor. The seeds can also be simply dried and eaten as a snack, so they are often roasted and salted or covered in chocolate and sold like candy. [14]

In cosmetics, the use of the oil from apricot seeds does have some similar properties to almond oil and may be applied to the skin or included in personal care and beauty products.

There are many potential side effects of apricot seeds, most of which relate to the danger of cyanide poisoning. Essentially, if you ate enough of these seeds to experience any side effect, the symptoms of cyanide toxicity would be the first to appear and would be the most serious. [15]

Cyanide poisoning has many different symptoms, even in their mildest form, including nausea, vomiting, stomach pains, fever, rash, exhaustion, insomnia, thirst, muscle weakness, dizziness, cognitive confusion, inflammation in the joints and muscles, and rapid drops in blood pressure. In the most extreme cases, apricot seeds consumption can lead to coma, seizure, and even death. It should not be given to children. [16] [17]

Rate this article
Average rating 4.1 out of 5.0 based on 279 user(s).
Read This Next:
Popular Articles