There are many great benefits of betel nuts if you can regularly add these tasty, nutrient-dense snacks to your diet.

What are Betel Nuts?

Also known as areca nutz, paan, paan-gutkha pinlang, pinang, or supari, betel nuts are the fruit of the areca palm tree. It is scientifically known as Areca catechu and is native to India, Asia, the Philippines and parts of Africa. It has been used recreationally and medicinally since the 1st century AD. [1] [2]

Betel nuts are traditionally wrapped in leaves with a limestone paste and chewed, much like tobacco and these nuts are also used in a similar manner as caffeine. They have a sweet and spicy taste. The nut is a mild stimulant, which causes a sense of alertness, and is used in Ayurvedic and traditional Chinese medicine.

The top benefits of betel nut include its impact on alertness, energy levels, euphoria, salivation, and stamina. 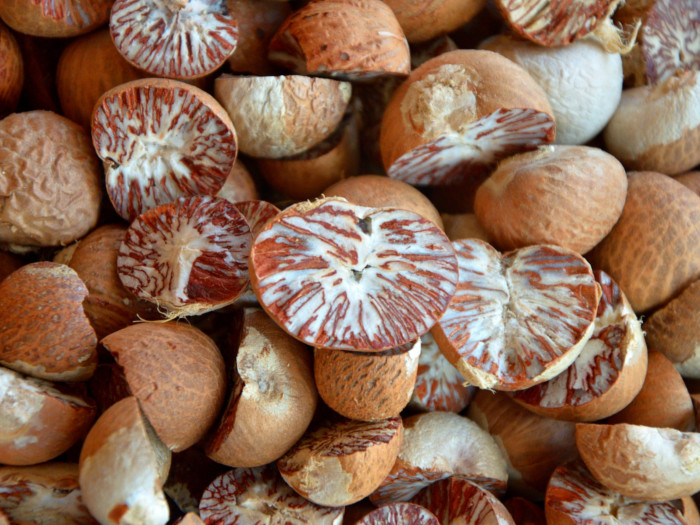 Betel nuts have been an integral part of traditional medicines in India. Photo Credit: Shutterstock

Betel nut is known for treating eye disorders like glaucoma.

In traditional medicines, betel nut was often used as a detoxifier, and a treatment to remove parasites and kill worms. It has the ability to stimulate gastrointestinal activity, helping with flatulence or constipation. Betel nuts are also traditionally used to prevent bad breath and phlegm. They are often chewed before traveling to help prevent nausea.

Betel nut is also known to manage the symptoms of schizophrenia, though this does come with some side effects.

These nuts are particularly useful for dry mouth sufferers, whether from disease or medication. Betel nuts have antibacterial qualities, which have led the extracts to be used as an ingredient in oral healthcare products. It is thought to help keep gums and teeth strong, and prevent cavities.

Betel nuts are used in folk medicine for treating symptoms of anemia as they help boost iron levels. The tannins in betel nuts can also lower high blood pressure. [3]

Betel nuts are also used to treat symptoms of depression by decreasing cortisol levels, which is known for increasing stress.

How to Use Betel Nuts?

Betel nut can be used dried or fresh. You can also boil, bake or roast them to snack on.

The dosage of betel nut depends on person to person so always make sure to consult with your physician before including it in your diet.

It is important to note that many researchers feel that the toxic effects of betel nuts outweigh their possible health benefits. Apart from stained teeth, other common side effects include diarrhea, vomiting, and shortness of breath. However, if consumed in large quantities, betel nuts can cause negative effects like: [4]

Rate this article
Average rating 3.9 out of 5.0 based on 67 user(s).
Read This Next:
Popular Articles