Using various parts of the calamus plant for medicinal purposes is a common natural remedy, but understanding its risks and effects is important before using this herbal treatment.

Calamus (also known as sweet flag, bitter pepper root, Rat root, sweet cane, myrtle grass, and sweet sedge) is a perennial herb with tall, hard, and sharp leaves, as well as a knobby rhizome that is often used in herbal medicines. Scientifically known as Acorus calamus  [1]the stems, leaves, and roots of this herb have been used in both Chinese and Indian traditional medicine practices. But the plant and its derivative products have been prohibited in certain countries, including the United States, for concerns over its carcinogenic effects. However, in small and regulated doses, the risks are few, while the benefits are notable.

The most impressive benefits of calamus include curing psychological disorders, relieving inflammation, stimulating circulation, and treating headaches, among others. 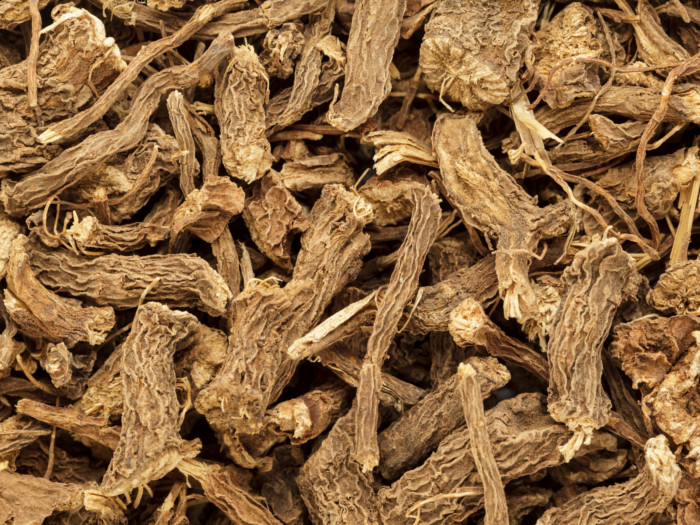 The effects that this herb can have on the nervous system are well known and proven, so for those who do suffer from psychological disorders or depression, drinking calamus tea from the rhizome (root) can be very helpful. [2]

Topical application of this herb’s essential oil can quickly relieve pain and discomfort in the muscles and joints, making it a favorite natural remedy for those suffering from rheumatoid arthritis, headaches, migraines or gout, among other common inflammatory conditions. [3]

With dozens of different volatile oils and antioxidants, this plant can provide a major boost to your hormone regulation and production, leading to a better balance of your hormones, which can help with everything from mood and sex drive to menstrual regularity and energy production. [4]

In traditional medicine, this herb was often used to treat disorders of the nervous system, including epilepsy and Parkinson’s disease. While this herb doesn’t provide a cure or a lasting treatment for these complex problems, it can treat the symptoms quite effectively. [5]

This oil helps in improving the sensory systems and mind. This nervine quality of this oil also prevents epileptic fits, hysteric attacks, and reduces stress in the body.

There is a stimulant quality to this herb when it is brewed into a tea and is thus able to boost the circulation within the body, delivering oxygen and resources to those areas that need it most.

By speeding up the metabolism, calamus can aid in weight loss efforts, as well as the healing process within the body following injury or illness. [6]

Drinking a mild cup of this tea before bed can help to balance the hormones and induce healthy sleep.

In terms of its medical applications, calamus has been traditionally and presently used for the following:

Side Effects of Calamus

There are some potential side effects to using this herb, particularly in large quantities, such as the following:

Most of these side effects were found when concentrated and isolated chemicals from the plant, such as β-asarone, were administered in test animals. This particular compound breaks down very quickly in the body, and there is still some debate about the accuracy of these potential dangers. β-asarone is also hallucinogenic in nature, which may have contributed to the negative reputation it has developed among medical professionals. [7]

Rate this article
Average rating 3.6 out of 5.0 based on 8 user(s).
Read This Next:
Popular Articles