The idea that cats drink milk has been reinforced through popular culture and assumption for generations, but many cat owners don’t realize the truth behind feeding their feline friend dairy products. Before giving “human” food to your pet for any reason, it is critical to understand the risks and rules involved.

Many cats are interested in drinking milk, but the majority of cats are actually lactose intolerant. This means that while drinking milk isn’t inherently dangerous for them, it will result in stomach discomfort and potential vomiting, diarrhea or nausea for your feline. Cats are particularly attracted to cream, which is extremely high in fat because cream used to rise to the top when milk was derived directly from cows. However, most of the milk available today is highly processed and has a relatively low level of fats, which is even further disappointing to cats who lap at a bowl of milk. 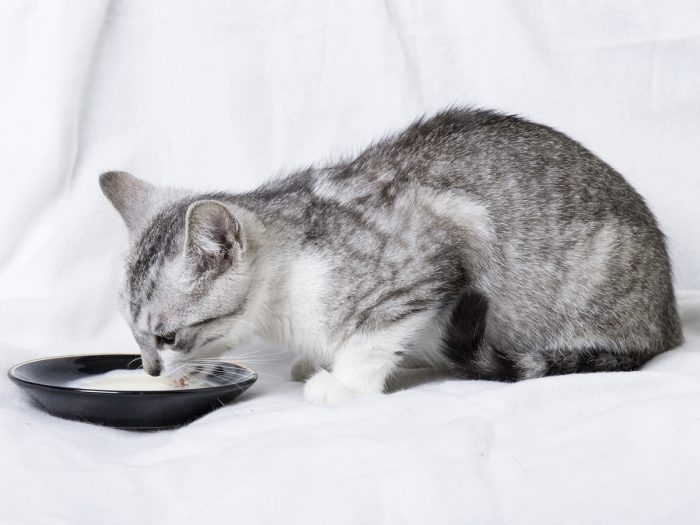 Some cats may have lactose intolerance. Photo Credit: Shutterstock

As kittens, most cats are weaned by their mothers, because they possess a key enzyme that can break lactose down into easily digestible sugars. When kittens grow up and stop feeding on their mother’s milk, the level of lactase drops dramatically and completely disappears in many cats. Without lactase, the lactose in milk simply passes into the colon, where it draws additional water into the gut, resulting in loose stools, diarrhea, gastrointestinal discomfort, and flatulence. As with most types of human food for pets, there is no need for cats to drink milk, as a balanced diet of cat food should provide all the nutrients they need. Even if your cat does possess lactase and doesn’t seem to get sick from drinking milk, it isn’t wise to give them access to milk, as it can compromise their caloric balance and lead to obesity issues. [1]

The short answer to this question is yes, you can give your cat’s lactose-free milk, but there is really no good reason to do so. Since cats are able to get all of the nutrients they need from traditional cat food, the addition of human food is largely unnecessary. When it comes to purchasing lactose-free milk rather than regular milk for your cats, it may prevent their stomach discomfort. [2]

While almond milk does not contain lactose, which is the main problem with traditional milk, it is primarily derived from almonds, which can also be toxic to cats when consumed in large quantities. Almonds are known to have toxicities for both cats and dogs, and it is not recommended as a regular meal replacement or supplement for that reason. The occasional sip of almond milk isn’t inherently dangerous, but it should be avoided in most cases. [3]

Similar to almond milk, soy milk doesn’t contain lactose, but it does contain other sugars that felines are unable to digest, resulting in many of the same side effects as cats drinking traditional milk. Generally speaking, your cat doesn’t need to fulfill any stereotypes of “getting the cream” to be healthy; a normal, balanced diet of approved cat food is more than sufficient. [4]

Rate this article
Average rating 3.9 out of 5.0 based on 6 user(s).
Read This Next:
Popular Articles