There have been a lot of talks lately about coconut milk, as well as various other coconut products on the market, such as coconut water, coconut cream, and coconut oil. While each of them is slightly different, it is important to understand the distinctions, as well as the potential health benefits that coconut milk holds.

What is Coconut Milk?

Coconut milk is derived directly from the flesh of the coconut (the white part). Depending on how you prepare it, and how many times you skim off the cream, you can create coconut milk of varying fat content. Known to be a great replacement for vegans, as well as those with lactose intolerance, coconut milk can have a number of impressive health benefits, when used in moderation. Basically, coconut milk is the combination of two separate products of coconut – coconut water and coconut cream.

This type of milk is thick and creamy but can be thinned through repeated boiling, particularly if you want to use the milk in desserts or other creamy sauces. Used as a major nutrient source in certain tropical areas, the popularity of this nut milk is increasing in other parts of the world, thanks to its nutritional composition and potential health benefits. 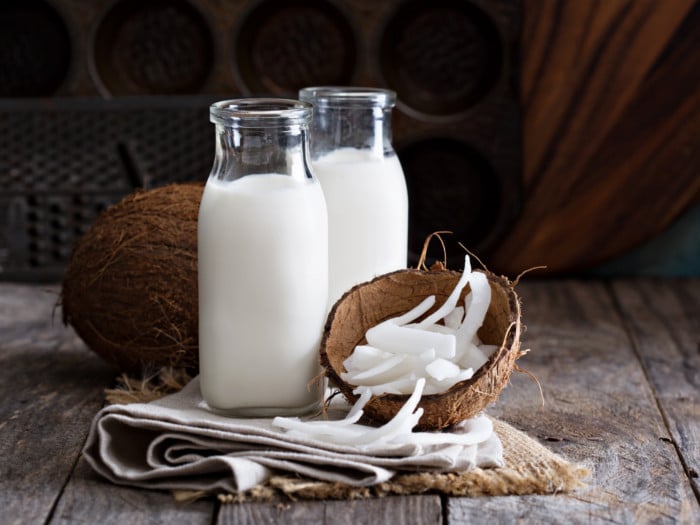 It is easy to make coconut milk at home. Photo Credit: Shutterstock

Coconut milk is a great source of magnesium, copper, iron, and manganese, as well as vitamin C, folate, selenium, and other trace minerals. That being said, this milk is also high in certain saturated fats, which is why it needs to be consumed in moderation. Interestingly enough, a single cup also provides a decent amount of protein and fiber, making this a well-rounded and unexpectedly nutritious beverage.

There are quite a few health benefits linked to coconut milk, including its ability to improve digestion, boost circulation, reduce inflammation, protect cardiovascular health, stimulate weight loss, and increase energy, among others.

With a significant amount of medium-chain fatty acids, coconut milk does have a rather high-fat content, but these are considered “good” fats that can help to stabilize heart health. More specifically, studies have found that moderate consumption of coconut milk is able to lower “bad” cholesterol levels and increase “good” HDL levels in the body, which prevents the development of atherosclerosis, and lowers your risk of heart attack and strokes. Other research argues that coconut milk also lowers triglyceride levels and can prevent coronary heart diseases. However, an excessive amount of this milk will have the opposite effect.

As mentioned above, medium-chain fatty acids are found in high levels in coconut oil, and unlike other forms of fat, this is directly metabolized by the liver, the by-product of which is ketones. These are more concentrated and healthier packets of energy and can give you both a cognitive and physical boost when you need it most.

The specific types of fatty acids found in coconut milk are able to increase the metabolism in a number of ways, while also suppressing hunger and resulting in lower overall calorie intake over the course of the day. By increasing calorie burning on a passive level, this milk can help you lose weight even when you’re not exercising.

Although most of the dietary fiber is strained out of this milk when you make it at home, there are still some benefits to the digestion system that regular consumption of this milk can help. The natural anti-inflammatory nature of this beverage will help reduce stomach discomfort and even help promote better bowel movements, thus relieving the symptoms of constipation.

Coconut milk is an excellent source of iron, which the body requires for the production of red blood cells. By preventing anemia, this milk can increase blood flow and oxygenation to those areas of the body that need resources the most.

There are many different traditional uses of coconut milk that relate to inflammation, particularly if you are a chronic sufferer of arthritis, gout, headaches, or irritable bowel syndrome. While the antibacterial properties of milk help to neutralize underlying infections, the anti-inflammatory properties will soothe swelling, redness, and discomfort.

Some research has shown that regular consumption of this milk can lead to the reduced size of stomach ulcers, and was even found to be as successful as pharmaceutical treatments. For those who prefer natural remedies, this is an excellent option for ulcers of any kind.

How to Make Coconut Milk?

You can make your own coconut milk at home quite easily, and this also ensures that you know everything that is added. While there are many reliable companies that sell this milk variety, the recent rise in popularity has also increased the number of options, some of which are less healthy or higher in fat than others.

If the cream and water begin to separate in the fridge, simply mix or stir the coconut milk before serving. You can enjoy your coconut milk in curries, porridge, and smoothies!

When Should You Drink Chamomile Tea

If you are wondering when should you drink chamomile tea or have any other queries, read our detailed FAQ. Learn about why, when, and how much is beneficial for you.