There are a number of Curcuma benefits to boost your overall health if you add it to your daily or weekly routine.

Curcuma longa, known more popularly as turmeric or curcumin, is a member of the ginger family that is native to Southeast Asia and India. The tall stems can grow up to 3 feet in height, with brilliant white or pink flowers. Curcuma is prized because of its long, tubular rhizomes, which have a bright orange color. The rhizomes can be eaten raw, but they are primarily boiled, dried, and ground to make turmeric powder. Turmeric powder is a popular spice around the world and is a staple ingredient of Asian curries. Turmeric is also used as a natural dye, producing a bright, golden yellow, much like saffron.

Curcuma has been used in Ayurvedic medicine and traditional Chinese folk medicine for centuries, and many proponents of the spice swear by Curcuma benefits. However, there is limited scientific evidence to back up some of these claims. 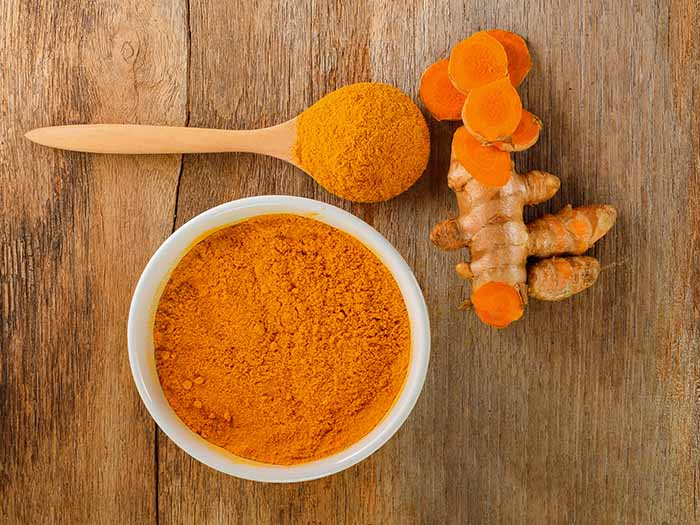 Curcuma is known for its potent antioxidant and anti-inflammatory properties. It may help reduce the risk of cancer, aid digestion, and improve cognitive abilities. Let us look at the most important Curcuma benefits.

The main active ingredient in Curcuma is curcumin. Curcumin is a powerful antioxidant with anti-inflammatory properties. However, there is very little curcumin in dried turmeric. Most people prefer to take turmeric extract or curcumin pills. Since curcumin does not absorb into the bloodstream well, most curcumin supplements sold for pain relief also contain black pepper. Black pepper has the chemical piperine, which helps curcumin be absorbed more efficiently by the body. According to a 2010 study published in Surgical Neurology International by Joseph C. Maroon et al., Curcuma longa and its derivative products are an effective means of relieving pain in therapeutic doses. [2]

While human studies are still being done, animal studies have shown that curcumin does indeed have a mitigating effect on pain receptors in the brain. Perhaps more importantly, curcumin is very anti-inflammatory. Curcumin has been shown to block a certain molecule, NF-kB, which is thought to be linked to inflammation on a genetic level and has been connected to many chronic diseases. [3] [4]

Curcumin stimulates bile production and promotes gallbladder health, which in turn contributes to overall digestive health. It is commonly recommended for gas, bloating and indigestion. It is especially recommended for anyone suffering from an inflammatory gastric disease, such as ulcerative colitis or gastritis.

Patients suffering from osteoarthritis – a condition in which the joints wear down and grow stiff from age – often take turmeric to help relieve inflammation. In fact, in numerous studies, curcumin did just as well as ibuprofen at controlling pain and swelling. Additionally, because curcumin is such a strong antioxidant, it can prevent oxidative stress in and around the joints. A 2016 study at Tufts Medical Center in Boston, MA showed that curcumin was indeed effective at relieving pain and had an effect on several enzymes related to inflammation, including lipoxygenase, cyclooxygenase, phospholipase, collagenase, and hyaluronidase. [5]

Although more trials are required, the initial research into Curcuma and cancer prevention is very promising. The antioxidants in Curcuma help prevent cell damage from occurring, and some research suggests that curcumin may also reduce blood flow to cancer cells, slowing proliferation. Multiple animal studies suggest that curcumin may even reduce the growth of tumors, and there is evidence that it may prevent certain cancers, such as colon cancer. [6]

Curcumin can stimulate the production of BDNF, a neurotrophic growth hormone that the body produces naturally, and which is key to neurogenesis, the growth of new brain cells. Low levels of BDNF have been found in people suffering from neurodegenerative diseases, such as Alzheimer’s or dementia. Many people believe that curcumin’s ability to boost BDNF levels can prevent the loss of cognition or memory, and may even reverse the effects of neurodegeneration. Curcumin may also help clear away beta-amyloid plaques, which are a key sign of Alzheimer’s. However, more human trials are necessary to claim a direct link. [7]

Curcumin has several benefits when it comes to cardiovascular health. First, it may help improve endothelial function. Your endothelium is the lining of your blood vessels. Endothelial dysfunction, which leads to blood clotting and high blood pressure, has been linked to an increased risk for heart disease. Studies suggest that Curcuma is just as effective as exercise at improving endothelial function. Furthermore, since Curcuma reduces inflammation and encourages antioxidant synthesis in the body, it is considered a great supplement for people recovering from heart disease. In one small study, people who were recovering from cardiac bypass took curcumin and had 65% fewer relapses. [8]

Because of its stimulating effect on the hormone BDNF, curcumin may also offer an alternative treatment for depression. Low BDNF levels and a shrinking hippocampus have both been linked to serious depression, which also affects one’s ability to learn and memory capacity. Higher BDNF levels encourage brain cell growth and communication, which may also, in turn, affect a patient’s serotonin and dopamine levels, thus stabilizing their mood.

In general, Curcuma as a spice is used in small quantities, but in larger doses, it may cause stomach upset, nausea, and dizziness. Curcuma may thin the blood, so do not take curcumin before checking with your doctor, particularly if you have already been prescribed medication for blood pressure.