Can You Get Cyanide Poisoning from Eating Almonds

Some people worry about getting cyanide poisoning from eating almonds, but before you swear off these nuts forever, it is important to understand the chemistry and actual risks involved.

Can You Get Cyanide Poisoning from Eating Almonds?

While there is a certain amount of cyanide present in the almonds that are widely available at stores around the world, there is not enough cyanide to be dangerous. The almonds you know and love are sweet almonds, and contain a trace amount of this potentially lethal poison. A kilogram of almonds contains only about 25 milligrams of cyanide, but the average serving size is only one ounce. [1]

For an average-sized male, more than 1,000 individual sweet almonds would need to be eaten in a single day for there to be any real risk of cyanide poisoning. Even then, the risk would be minimal, since the body processes cyanide quite quickly. Typically, any cyanide taken in by your body will be eliminated within 24 hours, so the daily intake of sweet almonds is not only safe but encouraged, thanks to their many nutrients and health benefits. [2] 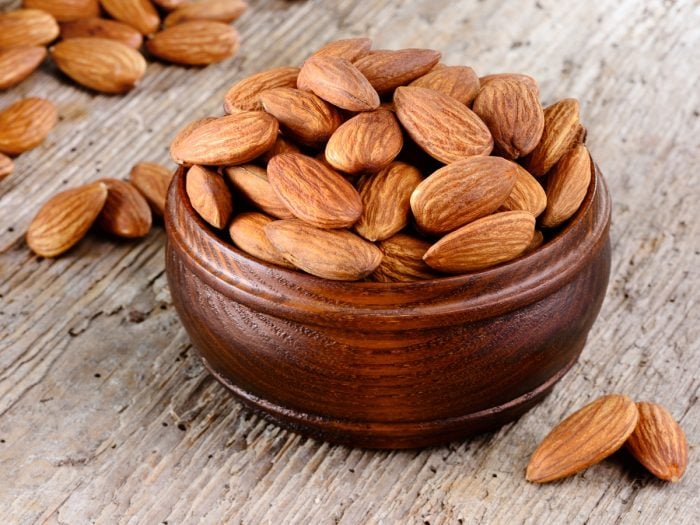 Almond milk is one of the newest and most popular beverages in the world and is highly prized by those with lactose intolerance and vegans alike. It is also a sweet alternative to traditional milk and is higher in certain nutrients than white milk. In terms of cyanide content, almond milk is completely safe, as a number of actual almonds used in that beverage are surprisingly low. A lot of the liquid content comes from water and other additives; in other words, a glass or two of almond milk would probably have the equivalent of a few dozen almonds in it, not more than 1,000 (roughly the minimum lethal limit). [3]

If you are making your own almond milk, however, be sure that you are using sweet almonds. While sweet almonds have a very low cyanide content, the same cannot be said of bitter almonds.

Many people don’t know that there are two types of almonds since sweet almonds are the predominant type found in every grocery store. Bitter almonds, however, are the result of a single recessive gene manifesting in these tree nuts. Bitter almonds have up to 50 times more cyanide per nut, making them far more dangerous for humans to eat. While you would need more than 1,000 sweet almonds to reach a toxic level of cyanide, you would only need to eat between 10 and 30 bitter almonds to reach the minimum lethal level. [4]

For that very reason, bitter almonds are prohibited from being grown or distributed in the United States and various other countries. That being said, in parts of the world where bitter almonds are available, it can be an easy mistake to make. A single unpleasant bite of a bitter almond should make it obvious that you shouldn’t consume them directly (i.e., without heating or processing them first), but care should still be taken. Getting cyanide poisoning from eating almonds may be rare, but not unheard of! [5]

Rate this article
Average rating 4.0 out of 5.0 based on 80 user(s).
Read This Next:
Popular Articles