There are a number of impressive dandelion root benefits you can enjoy if you know how to use this powerful herb properly.

The dandelion, also sometimes called lion’s mane, is a small, bright yellow flower with a “furry” flower head that closes up at night. It is native to Europe, Asia, and North Africa, but has become naturalized in the rest of the world, where it is often found in the wild as a weed. The dandelion root is thick and dark brown, with white flesh. [1]

All parts of the dandelion have been used in traditional medicines for centuries. In the United States, it has been used by indigenous people to relieve gastrointestinal distress, or as a poultice.

In traditional Chinese medicine, dandelion root is used to treat gut, liver, and lung diseases. Furthermore, many cultures recognize the benefits of dandelion root for women who are breastfeeding or going through menopause. Today, modern herbalists still recommend the root for a variety of health problems, though there is little scientific evidence to back up the beneficial claims. 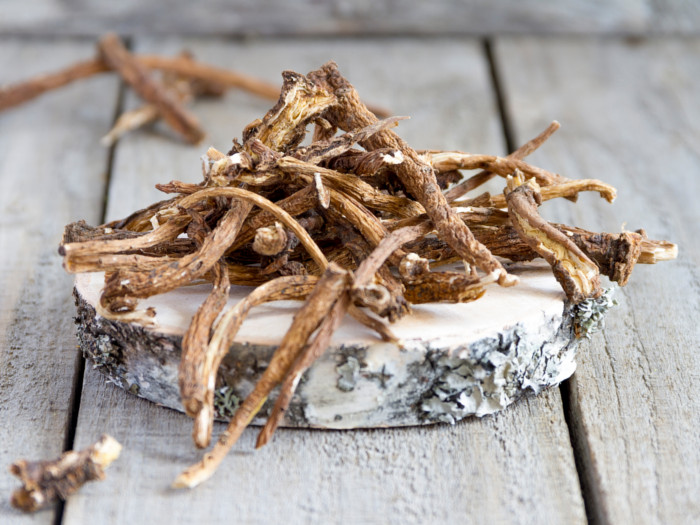 Dandelion root has long been held as a “liver tonic” in folk medicine. Photo Credit: Shutterstock

The top health benefits of dandelion root include its ability to detoxify the liver, aid digestion, reduce the risk of cancer, and treat inflammation, among others. Let us look at these benefits in detail.

In traditional medicine, dandelion root is a popular tonic for liver damage. It is rich in iron, vitamin A, and calcium, all of which are key to liver health. This root is thought to promote increased bile production, while also cleansing the liver and gallbladder. Because of its liver-toxin cleansing powers, dandelion root often shows up in packaged detoxifying blends. Modern studies suggest that dandelion root may actually prevent liver fibrosis due to the inhalation of carbon tetrachloride. It may also help prevent alcohol-related damage to the liver. [2]

Dandelion root has a slight laxative effect and is recommended to help digestion after meals. It may also encourage the growth of a healthy gut biodome. It also aids the digestion of rich, fatty foods by stimulating the production of stomach acid and bile. It is used to increase appetite, reduce gas, and relieve constipation. Dandelion root is also a rich source of inulin, a prebiotic fiber that is converted by your gut bacteria into short-chain fatty acids. [3]

Much of this root’s anticancer reputation is due to its ability to induce apoptosis, according to a 2016 report published in the Oncotarget journal (Pamela Ovadje et al.). Apoptosis is a process by which cells recycle themselves, which allows cells with damaged proteins to be rebuilt as new cells; this is critical to stopping the proliferation of cancer cells in the body. The dandelion root extract has been shown to be effective at slowing the growth of pancreatic cancer cells, as well as leukemia and melanoma, through stimulated apoptosis. [4]

Dandelion root has long been used to treat inflammation of organs, joints, and swelling. Part of this herb’s effectiveness at combating inflammation has to do with the phytonutrients and essential fatty acid it contains. Phytonutrients are antioxidants naturally contained in plants, which have been found to provide numerous health benefits. [5]

Dandelion root is a traditional diuretic, a quality verified in a 2009 study at the Tai Sophia Institute in Maryland, conducted by Bevin A Claire and Richard S. Conroy. Diuretics are good for the body in several different ways. Because it reduces water weight, it is recommended for weight loss. It is also thought to help kidney damage, by inducing flushing of toxins and supporting healthy kidney function. For this reason, it is also recommended for gout, rheumatism, or any swelling of the joints. It may also help prevent urinary tract infections [6] [7]

Though there is little scientific evidence, for centuries, this root has been used by nursing mothers to help stimulate breast milk production and regulate hormones. Some proponents theorize that dandelion root may not help boost lactation in itself, but that the significant vitamins and minerals contribute to the mother’s overall health, and therefore healthy lactation. [8]

Dried dandelion root can be found either as a powder, in capsules, or dried and made into a tea. Dandelion root tincture is sometimes available. Dandelion root “coffee” is a popular coffee alternative for those looking to avoid caffeine, and it even has a similar taste like your favorite morning brew!

Side effects like irritation, heartburn, and diarrhea do occur in some people. Those who suffer from allergies to ragweed, marigolds, chrysanthemums, chamomile, sunflowers or daisies should avoid dandelion products, including the leaves and roots. Dandelions also contain small amounts of iodine and latex.

People suffering from gallstones, kidney damage, or gallbladder issues should not take dandelion root. Large doses of dandelion may reduce testosterone in men, or cause infertility. Dandelions grown in the wild may absorb heavy metals from the environment and are not recommended for ingestion. Use of this root may interfere with the absorption of any current medication, so check with your doctor before using this herbal solution.

Rate this article
Average rating 4.5 out of 5.0 based on 16 user(s).
Read This Next:
Popular Articles