How to Eat Raw Oysters

While other legends may fade, oysters have kept their myth of aphrodisiac powers. The origins of this lover’s treat may lie in folklore, but it was taken quite seriously. The Romans believed that it could cure all kinds of sexual dysfunction. It is also mentioned frequently by the legendary Italian adventurer Giacomo Casanova in his memoir Histoire de ma vie (Story of my Life). Oysters are seen as a delicacy that possibly mimics perfectly the flavors of the sea. But it can be intimidating for a newbie. If you are wondering about how to eat raw oysters, we have a short guide for you.

How to Eat Raw Oysters?

The good news is that there is no wrong way to eat an oyster as long as you take it out of its shell! Oysters are usually served with a small fork. Hold the oyster and use the fork to gently loosen the flesh from the shell. If there is no fork, use your finger for the job. Holding the oyster by its wider side tilt it into your mouth from the narrower side. It is easier this way. There is an urban legend that oysters must be swallowed whole and not chewed. But we won’t recommend that. You can’t know its delicate flavor unless you savor the taste!

Raw oysters are usually served with a light dressing or sauce. Many people prefer it without any accompaniments. If you want to add a dressing, make sure to use only a scant quantity. The idea is to enhance the flavor and not drown it in a sauce. The oyster should be opaque with seawater in the shell. A translucent oyster in a dry shell shows that it did not get enough to eat. It should also be full in its shell.

While raw oysters are prized and often preferred by many for their delicate flavor, keep in mind that eating raw oysters can be harmful to your health. According to the FDA, raw oysters can be contaminated with bacteria, vibrio vulnificus. These naturally occurring bacteria can be infectious and are also known to be fatal in some cases. Hence, raw oysters are not recommended for those with low immunity, pregnant women, and children. [1] 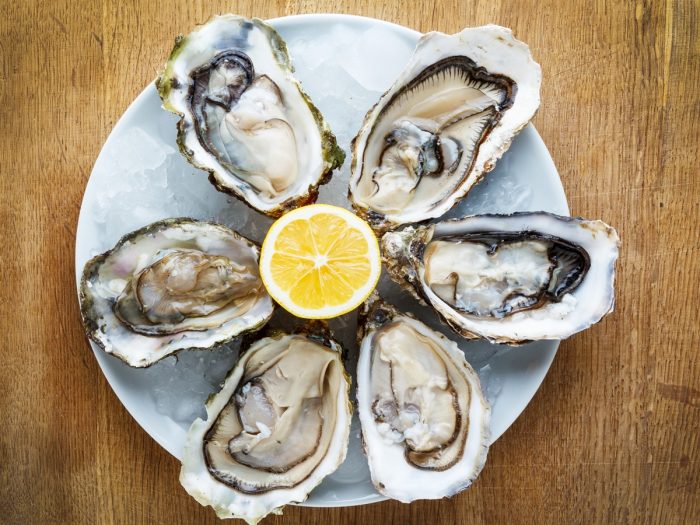 According to the USDA, a medium-sized (50gm) raw oyster (Pacific, without the shell) contains 69 calories with carbs at 4g. It is considered one of the healthiest sources of proteins (8g) since it is low in fat (less than 2g). An article in The Washington Post ranked it among the healthiest of animal proteins. It is also a great source of zinc with just a couple of medium-sized oysters sufficient to meet your daily requirement if you are a man. For women, a single medium-sized oyster would be sufficient. The high zinc content also gives weight to oyster’s legend as an aphrodisiac. Animal tests show that it can improve reproductive function and help in mitigating sexual dysfunction in men. Oysters are also rich in other minerals and vitamins, such as zinc selenium, vitamin B12, and iron. [2] [3] [4] [5]

You can read more in our article 10 Wonderful Benefits of Oysters.

Oysters are often confused with clams and indeed they do share many similarities. They are both from the Mollusc family. They are bivalves and look very similar. But beyond that surface similarity, they are very different in their uses, anatomy, and morphology.

Other than the first few weeks after their birth, oysters spend their life attached to one spot. Clams, on the other hand, move around in search of food. Clams have feet to move, while oysters have feet only in their initial years when they move around. Clams have a smoother and shinier shell than oysters which have a rather rough shell. The natural habitat of oysters is marine or brackish water, while clams are freshwater creatures. Oysters produce pearls, while clams do not. Their anatomy is also different.

Can you Freeze Oysters?

According to The National Center for Home Food Preservation, oysters that are still in their shell should be preserved live. All you have to do is wash the shells thoroughly and place them in moisture barrier bags. But this can take up freezer space. To save space, wash your oysters and shuck them. You can read the proper procedure in our article How To Cook Oysters & 5 Easy Recipes. Drain the shucked oysters, reserving the liquid. You can wash the meat to remove any dirt or grit. Place them in a freezer bag along with the liquid. Make sure to leave half-an-inch of headspace. Keep in mind that frozen oysters will not taste the same as fresh oysters. These are best used in stews or casseroles. [6]