We can thank the legendary Italian lover Giacomo Casanova for oyster’s reputation as an aphrodisiac. The legendary Italian lover reportedly ate as many as 50 oysters for breakfast and credited these with his sexual prowess. Oysters have been prized for their ability to boost one’s libido, from the ancient Romans to modern Valentine Day menu-planners. They’ve also always enjoyed a special place in our culinary tradition, loved by kings, lovers, Gods, and the common man.

Purists prefer their oyster raw. The delicate seafood only needs the barest spritz of lime or light dressing, if at all. But the FDA warns against raw oysters because they can be contaminated with naturally occurring bacteria, vibrio vulnificus. These bacteria cause infection which can turn fatal in some cases. People with low immunity, children, and pregnant women should not eat raw oysters. So, forget the purists and snobs. And don’t hesitate to cook your oysters. We have 5 easy oyster recipes to get you started. [1]

How to Cook Oysters?

Oysters can be tricky to cook. Like most seafood, oysters are delicate in flavor. Hence, they must be cooked carefully. Then there is the hard shell to deal with. But once you get the hang of it, oysters are actually incredibly easy to make, quick, delicious, and a sure-fire people pleaser. Before you start cooking your oysters, you need to know how to buy, clean, and shuck them. So, here’s a short primer:

You can get oysters at retail stores. But many people prefer buying them from a reputable seafood market or shop. It is best to pick a place with a good turnover so that you know they are stocking the freshest produce.

Toss out any oysters with open shells. Clean the oyster under freshwater, washing them rigorously. You can use a hard brush to clean the grit. Do not use soap. You can store the oysters in your fridge for up to a week. But don’t let them get dry. Bung them in a container, cover with a damp tea towel and stick them in the fridge.

Many people are intimidated by the hard shell of the oyster, unsure of the right method of opening them. But all you need is a tea towel and an oyster knife. If you don’t have one (and why would you) a paring knife, table knife, or even a flat-head screwdriver would do just as well. Here’s a step-by-step guide on shucking or opening the oyster shell.

Oysters are cooked with or without their shells. The shells open up as they cook. You can fry, broil, bake, or steam them. We have picked 5 most popular recipes to help you out.

If you want to impress your guests, but don’t want to spend your time slaving in the kitchen, scalloped oysters are the way to go. This recipe follows the basic tenet of using just a few ingredients to showcase the star of the show, the oysters. To make this oyster casserole, you line a buttered baking dish with crushed-buttered saltine crackers. Spread a layer of freshly shucked oysters, reserving the liquid. Dot it liberally with butter, salt, pepper, and parsley. Repeat the alternate layers of crackers and oysters with butter, salt, and pepper. Finally, pour over a mix of oyster liquid and cream at the top. Bake in a preheated oven, at 350 degrees Fahrenheit, till the top puffs up. Serve it warm with a sprinkling of parsley.

Fried oysters are a popular appetizer. You can also make it at home. We have a delicious recipe that gets its kick from a spiced marinate. Our version has a jazzed up breadcrumb coating that adds to the vow factor. 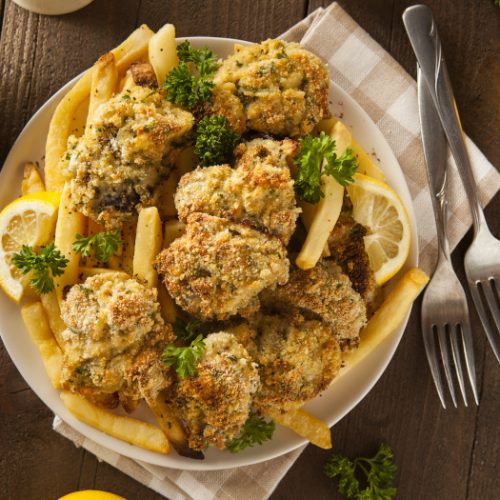 It is best to bake the oysters in their shell. Other than the aesthetic aspect, the shells make a lovely bowl for each oyster. Place the shells with their oysters on a baking tray. You can place them on a bed of salt or uncooked rice to help balance them. Top the oysters with some scant herbed butter or shredded cheese of your choice. Other topping options include bacon, onion, or spinach. Just make sure that you don’t put too much of it. Top this with some breadcrumbs. Place these in the oven and bake at 425 degrees Fahrenheit till the breadcrumbs turn golden-brown. Sprinkle with fresh parsley before serving.

You broil the oysters using the same recipe as baked oysters. Alternately, toss the oysters (with some of their liquid) with herbs like oregano, parsley, and thyme. Add some olive oil and white wine vinegar. Spread on a shallow baking dish and top with parmesan cheese and breadcrumbs. Broil until the top is golden-brown and bubbling. Serve warm with some crusty bread.

The method is pretty much the same as fried oysters, only with less oil. Dredge the drained oysters through seasoned flour, followed by dunking in beaten eggs, and then coat with breadcrumbs. You can jazz up the breadcrumbs with parmesan cheese. Pan fry these in a pan, in about an inch of hot oil. After about a minute or more, turn over the oysters with a pair of tongs. They should have a golden-brown crust. You can serve it with just a squeeze of lime or with a lemon butter sauce.

These are our top 5 oyster recipes to get you started. Fried, baked, broiled, or scalloped, oysters are delicious. As we have shown, they are also pretty easy to prepare. Which is your favorite? Share your favorite recipes with us in the comment section below.