Many people don’t even know that there are multiple types of eggplant, but if you are looking for some unique and delicious addition to your weekly diet, these healthy vegetables can be an excellent option. Depending on where you live in the world, some types may be more or less available, but with so many to choose from, you can almost always find an eggplant variety that suits you best!

Ranging from three to eight inches in length, the graffiti eggplant is aptly named, considering the strange nature of its coloring. The exterior of this eggplant variety, which tends to be teardrop-shaped, is streaked with white and purple, similar to the running lines of spray paint. This variety of eggplant is also quite bitter, leading many cultures to dismiss it as potentially toxic. This eggplant can be cooked very quickly, due to its relatively small size, which will also help to improve the flavor. [1] 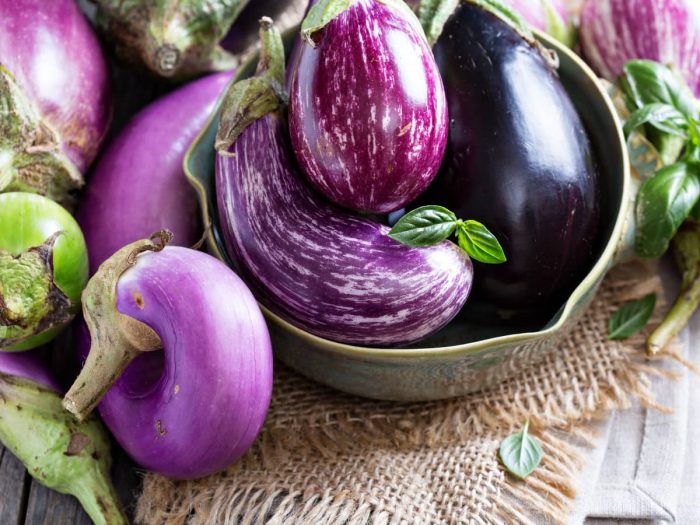 One of the most common types of eggplant, Italian eggplant is actually a broad term that encompasses a variety of different eggplants in Europe and the Mediterranean region. These eggplants are wider at the base and tend to be between eight and ten inches in length. The coloring on these eggplants will range from a deep purple to light lavender, and the skin is quite glossy. Bearing white flesh and a slightly milder flavor than other eggplant varieties, this type is sought after for cooking applications around the world.

These types of eggplant are very easy to recognize, as they are longer and more slender than most other varieties, and their color is a very dark purple – almost black, in certain cases. The skin of these eggplants is also quite thin, so you don’t need to remove it before cooking, as you do for certain varieties. Strangely enough, there are very few seeds in Japanese eggplants, so they don’t have the bitter taste of many other types. This makes them ideal for pickling, but they are also popular health foods, due to their high levels of potassium, vitamin C, dietary fiber, and antioxidants. [2]

As with Japanese eggplant, Chinese eggplant is one of the most easily recognized types of eggplant. With a vibrant violet exterior and a length that can exceed eighteen inches, it is hard to mistake a Chinese eggplant. For those who enjoy cooking with eggplant, this is also one of the sweetest varieties, with very few bitter seeds inside. The unique coloring signifies that there are quite a few anthocyanins in this variety, making it excellent for preventing oxidative stress and chronic disease. [3]

These smaller eggplants have a slight teardrop shape and are bright purple in color. The plants on which this variety grows are often ornamental in nature, but a number of these eggplants can grow at one time on the same flowering plant. Similar to Japanese eggplant, the peel of this variety is very thin and doesn’t need to be removed. The flesh is a pale, milky white and has few seeds, imparting it with a rather neutral flavor. [4]

Ranging in size from 3-6 inches in length, white eggplant is almost always smaller than its purple counterpart and is shaped somewhat like a bell or large drupe fruit. Unlike some of the other purple types of eggplant, white eggplant needs to be peeled before it is cooked, thanks to its surprisingly thick skin. High in magnesium, potassium, and copper, this vegetable adds a unique color and nutritional spark to many different meals. [5]

This particular variety of eggplant is actually a miniature version of the normal-sized vegetable. Bearing the same oblong base and dark purple color, this variety of eggplant rarely exceeds 5 inches in length. The inside of this eggplant also has a cream-white color and cooks very rapidly. There are very small seeds inside, which do give this vegetable a bit of bitterness, but not as much as other varieties. Unlike many other varieties of this vegetable, Indian eggplant is usually ready to harvest in the spring, rather than the autumn or winter. [6]

Out of all the types of eggplant, none stands out like the Thai eggplant, which seems different in almost every way. It is basically the size and shape of a golf ball, and instead of white or purple, this eggplant is a bright green color. Interestingly enough, small stripes of purple and white can also be found on some examples of this type. Traditionally included in dishes like Thai green curry, this eggplant isn’t the most common, but it does have a unique flavor and appearance that will stand out in any dish! [7]

Named for its visual similarity to small green apples, this variety of eggplant even has an interior that resembles an apple when you cut it open to remove the seeds. The flesh of this variety almost seems to melt when cooked, taking on a creamy texture. It is commonly mistaken for zucchini but has a flavor all its own.

Rate this article
Average rating 3.6 out of 5.0 based on 13 user(s).
Read This Next:
Popular Articles