There are hundreds of tea varieties available but fermented tea is a particular variant of standard tea that has a unique flavor, color, and history. It may also provide a number of health benefits, even some that traditional tea doesn’t offer. Before adding fermented tea to your daily or weekly health regimen, it is important to understand where it comes from, how it differs from normal tea, and what potential health effects and side effects it can have.

What is Fermented Tea?

Quite simply, fermented tea is a form of tea that has been exposed to microbes and allowed to ferment. Regular tea leaves are often referred to as “semi-fermented” because basic exposure to air begins certain oxidative processes. When yeast, bacteria, or mold is added to the mix, full fermentation can occur. This fermenting process can take as little as one day, but some tea leaves are prepared under these conditions for years before they are used. Teas may undergo very brief periods of fermentation (Red teas in China), moderately long periods (blue-green tea), or very long fermentation time (post-fermented teas, e.g. Pu-erh). [1]

The exposure to microbes, as well as moisture, allows the tea leaves to undergo an impressive transformative process of oxidation. This causes the leaves to darken, in addition to the release of certain microbes and metabolites that may benefit the overall health. The taste of fermented tea tends to be a bit milder and less bitter than other tea varieties, making this an extremely popular class of teas in certain countries.

It is believed that this kind of tea originated in China, and was accidentally created for the first time. China and neighboring countries (e.g., Japan, Thailand, etc.) remain the primary consumers of fermented tea in the world. Also, the potential health benefits of this tea style have boosted its popularity around the globe. While kombucha is the most well-known fermented tea in most areas, there are quite a few different types that are enjoyed worldwide. [2] 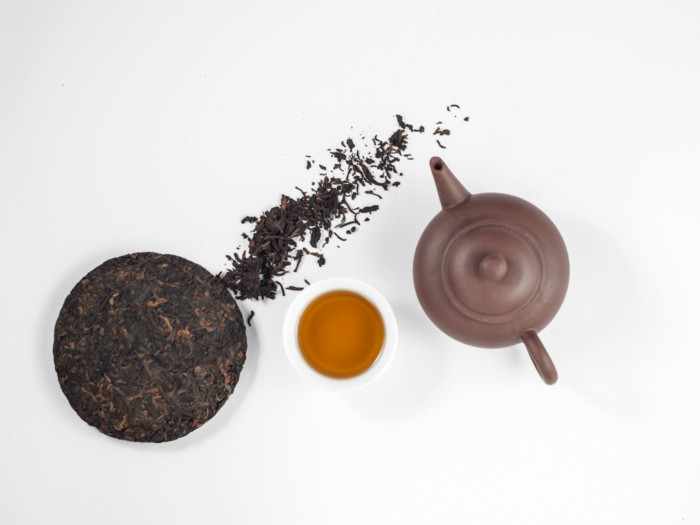 There are several kinds of fermented tea like puer tea and kombucha. Credit: Shutterstock

Some potential health benefits of fermented tea include its ability to improve the immune system, support digestive health, boost energy levels, reduce inflammation and increase circulation, among others.

The antibacterial and antibiotic properties of fermented tea are well known, despite the fact that it is created with the help of microbes. This can help balance the bacterial levels in your gut, which is where more than 50% of immune activity occurs in the body, helping to keep your system well protected. [3] [4]

Fermented tea is typically rich in probiotics, which is a very good news for your stomach and bacterial balance. Probiotics can stimulate the growth of beneficial bacteria in the stomach, and they are essential for speeding up the digestive process and properly absorbing nutrients. [5]

As with most other types of tea, there is a small level of caffeine in fermented tea, which can provide an energy boost if you feel your energy or attitude lagging. There isn’t as much caffeine as you find in a cup of coffee, but the other benefits of fermented tea make up for the slightly weaker caffeine kick. [6]

Studies have shown that fermented tea is able to improve circulation within the body by optimizing cardiovascular function and improving the uptake of iron by the body. Increased iron levels mean more red blood cells can be produced to deliver oxygen and other resources to cells around the body. [7]

Due to the fermentation process, some of the antioxidants and anti-inflammatory compounds found in traditional tea are actually found in higher levels after fermentation. This can give your body a major boost against inflammation and chronic pain. [8] [9] [10]

Research supports fermented tea’s ability to lower triglyceride levels in the body, which is important for those looking out for heart health. Triglycerides are associated with a breakdown of blood vessels and tissues, which increase your risk for heart attacks and strokes. [11] [12]

While fermented teas are said to have health benefits, the research is limited. Large-scale human trials are needed to understand the therapeutic potential of this beverage. There are several risks and side effects to fermented tea too.

In terms of fermented teas around the world, the most popular varieties come from China, Korea, Japan, Tibet, and Thailand.

Rate this article
Average rating 4.2 out of 5.0 based on 35 user(s).
Read This Next:
Popular Articles