Barley grass is young, soft green shoots that crop up on the barley plant. It has a number of health benefits associated with it which may include relief from ulcerative colitis and boosting the immune system. It also maintains healthy skin, rejuvenating effects on the entire body and other positive effects. An abundance of superoxide dismutase in barley grass makes it a wonder tonic! Here, find out more about all of the things to love about this grass.

What is Barley Grass?

Barley grass is amongst the earliest grown sweetgrass in the world, with its history traced even before 5000 BC. Its nutrient-dense profile and multidimensional benefits were just a few of the reasons for its popularity amongst the ancient Greeks and Romans. Apart from being used as livestock feed, recently it has been gaining a lot of popularity around the globe for its ability to enhance health. [1] [2]

Barley is a nutrient-rich superfood loaded with vitamins such as vitamin A, B-vitamins, thiamine, riboflavin, niacin, vitamin B6, folate, vitamin C (ascorbic acid), vitamin E (alpha-tocopherol) and vitamin K (phylloquinone). It contains electrolytes, including magnesium, phosphorus, and potassium along with other essential minerals such as zinc, iron, and calcium. Barley grass is also a rich provider of powerful antioxidants, essential amino acids, and beneficial enzymes. It also supplies valuable fiber to the body and does not offer any cholesterol. [3] [4]

Barley grass can be consumed as a juice extracted from cereal grass sprouts or in the form of green powder by spray drying the grass. It brings relief in a range of health conditions discussed below: [5]

Barley grass has impressive antioxidant content; along with vitamin E and beta-carotene, barley grass is a potent supplier of the critical enzyme, superoxide dismutase, which may help neutralize the effects of oxygen free radicals produced during energy metabolism. The protective action of these radical scavengers can help in the prevention and delay of the development of a wide array of chronic diseases caused by oxidative stress. [6]

Barley grass is a valuable herb in treating ulcerative colitis attributing to its stimulating effect on gut-friendly bacteria. It has been found to assist in alleviating inflammation and other associated symptoms implicated in ulcerative colitis by reducing the provocative chemicals in the bowel. This nutrient-rich food may also assist in balancing the fluidity in the bowel and eliminating accumulated toxins from the body. [7] 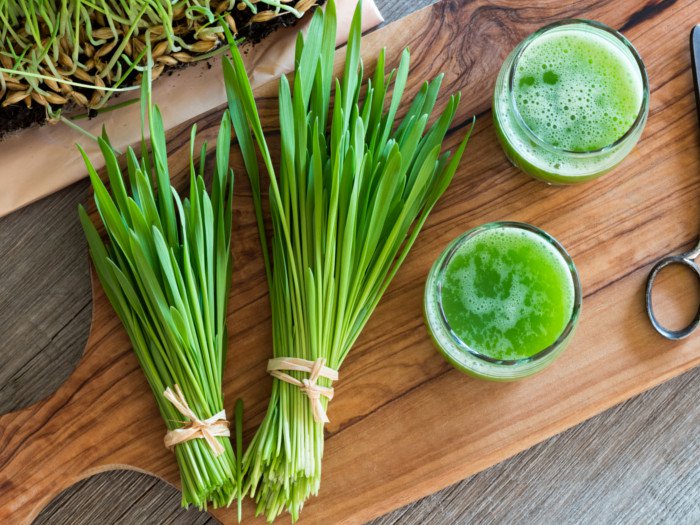 Barley grass may support boosting the immune defense mechanism of the body. Regular consumption provides the required nutrition which is necessary for balancing the optimal production of immune cells in the body. An effective and strong immune defense system vigilantly fights infections and prevents the development of chronic inflammatory diseases. [8]

Barley grass has been experimented with in various diets for chronic disease prevention. A study published in the Biomedical Journal in 2017 states that Korean researchers found that barley grass extract caused apoptosis of breast and prostate cancer cells and may be useful for cancer treatment during therapeutic interventions. While these results are promising, its anti-cancer properties have yet to be fully explored.
[9]

Another beneficial effect of barley grass is its potentially protective action against the cell destructing effects of UV radiation. It extends a therapeutic relief on the existing damaged cell owing to the presence of superoxide dismutase enzymes. [10]

It may also act defensively against the effects of radioactivity; some attribute this to the presence of chlorophyll content, which may improve the resistance to radioactivity and also encourages the production of new blood cells. For this reason, it is generally recommended to drink barley grass juice pre and post-exposure to x-rays to provide additional protection (along with appropriate personal protective gear) against the radioactive damage.

Barley grass is also considered a home remedy for fighting various kinds of addictions. The presence of glutamic acid in it is said to inhibit the craving for alcohol, coffee, nicotine, drugs, and even sugary sweets. However, for those with a harmful addiction, it is best to seek medical attention in combination with this home therapy.
[11]

Barley grass is considered a natural way to stimulate the regeneration of cells without any side effects – and reduce signs of aging. Vital components such as chlorophyll, vitamin B, iron, and phycocyanin, a blue pigment in barley grass, improve the bone marrow and support the creation of white and red blood cells. This renewing effect of barley grass also helps reduce the signs of aging by rejuvenating the aging cells and helping to maintain healthy and youthful skin.

Barley grass is used worldwide in soups and stews, and for making barley bread. Barley is also used in the manufacturing of malted products, such as malted milk, wine, and beer.

Apart from an impressive range of usage for humans, barley grass is also used to make hay and fodder for animals.

Word of Caution: Although barley grass is generally safe, some people may react sensitively to the barley grain with symptoms including vomiting, itching, and burning sensation in the throat and mouth. Those people should avoid the use of barley grass or discuss it with a medical expert to better understand if this is allergy-related.

While pure barley grass, without any grains, contains no gluten at all, people suffering from celiac disease should generally avoid the usage of barley products made from the grain as they may contain gluten protein. Celiac disease interferes with the absorption of vital nutrients in the body and may result in serious complications related to the brain, liver, and the nervous system. [12]

Natural caution before trying barley grass for the first time is always advisable particularly when the sensitivity is not known. During special conditions such as pregnancy and lactation, it is recommended to consult an expert to understand the appropriate dosage and effects of barley grass to avoid any complications.

Include it in your diet to experience an overall strengthening and invigorating effect on the entire body. [13]

Rate this article
Average rating 4.1 out of 5.0 based on 533 user(s).
Read This Next:
Popular Articles