Beer is the third most popular drink preceded by tea and water and according to some, one of the oldest recorded recipe in the world. Drinking beer in moderation can confer certain health benefits and they are a surprising list. Beer, in moderation, may benefit heart health, improve blood sugar control, and potentially lower the risk of dementia. It also acts as a stress buster and a diuretic.

Beer is an alcoholic drink that is prepared using barley, hops, water, and yeast. It is one of the most popular alcoholic beverages, which is enjoyed by people all over the world. There are many varieties of beer and some of them include pale ale, stout, mild ale, wheat, lambic, and lager beer.

The cereal grains present in this alcoholic beverage are responsible for the nutritional value of beer. People usually prefer to drink it with certain meals.

While red wine is often considered the “healthy” option due to the presence of antioxidants, a Harvard report says beer contains similar phenolic compounds as wine. However, they are in small amounts in beer, including quercetin, epicatechins, and gallic acid. A majority (70-80%) of the polyphenols come from barley malt and the rest from hops, the flowers of the hop plant. Beer also has a larger protein amount than wine. [5] [6] [7]

The 2015-2020 Dietary Guidelines for Americans defines a standard serving of beer as 12 ounces and 5% ABV. However, the alcohol content for beer can range between 2.5 to 25% ABV. Furthermore, light beers usually contain almost as much alcohol as regular beer – about 4.2% ABV. It is best to check the alcohol content on the bottles before drinking. [8] [9] 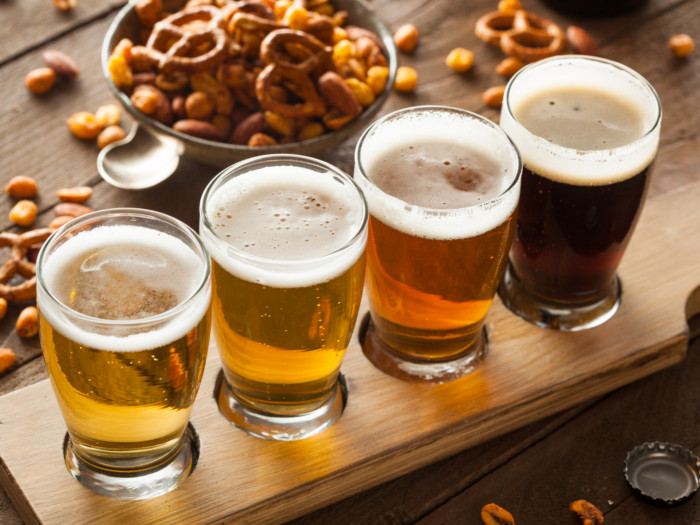 Health benefits of beer become prominent if it is consumed in moderate amounts. Some of them include the following:

While an excessive amount of alcohol is never good for anyone, some components that make a beer could have some anticancer potential. A study published in the European Journal of Cancer found that prenylflavonoids such as xanthohumol and isoxanthohumol in beer, derived from hops, could have chemopreventive properties. An animal study published in the International Journal of Cancer found that beer intake could contribute to a reduced risk of cancer susceptibility. [10] [11]

Beer contains vitamin B6, which protects against heart diseases by preventing the build-up of a compound called homocysteine. It has a thinning effect on the blood and prevents the formation of clots, which cause blockages in the coronary arteries. According to a study conducted by ICTAN Spain, moderate consumption by healthy Spanish adults during 1 month was linked with positive blood lipid profile changes. Moderate consumption also reduces the risk of inflammation, the root cause of atherosclerosis, which is cholesterol and plaque building upon the blood vessels, and artery walls. [13] [14]

Studies have linked moderate beer consumption to a lower prevalence of type 2 diabetes. According to a study carried out by the Harvard School of Public Health, moderate intake of beer can reduce the risk of developing type 2 diabetes in middle-aged men. It was found effective for occasional drinkers who kept their consumption at one or two servings of beer, wine, or liquor in a day. [15]

Beer contains iron, vitamin B12, and folic acid, deficiency of which may lead to anemia. A study conducted at the University of Valladolid, Spain, has found that iron content in dark beer is more than compared to pale or non-alcoholic beer. Another study published in Alcoholism: Clinical and Experimental Research journal found that low-level alcohol consumption could increase levels of ferritin in the body, which in turn could lead to increased iron stores. [16] [17]

Beer increases the potency and impact of vitamin E, which is a major antioxidant in the body. It is an important part of the maintenance of healthy skin, while also slowing down the aging process.

While intake of water is the best way to deal with kidney stones and prevent them, moderate consumption of beer might also help with kidney stone prevention, says a study published in the Medicine journal. [18]

Alcohol in beer can lead to diarrhea in some. In others, however, beer could help the digestive system function more efficiently. This could help with constipation. [19]

Like other alcoholic drinks, beer is shown to reduce stress and facilitate sleep.

Beer acts as a diuretic and significantly increases urination. This facilitates the increased removal of toxins and waste materials from the body.

Beer is a good source of soluble fibers that promote general health. This includes being good for the heart, as well as helping to clean out the digestive tracts.

Limited consumption also ensures that the calorie intake from it does not affect the health adversely. [20]

Drinking in excessive amounts (addiction) is dangerous to health and can negate any and all beneficial effects. Some short-term side effects on excessive beer consumption include: [21]

According to the Centers for Disease Control and Prevention, people who should not drink alcohol include women who are pregnant, individuals younger than 21 years of age, and people who are recovering from alcoholism or cannot control the amount they drink. Also, it should be avoided by people who are planning to drive or any other activity that required focus and skill. However, different countries have different rules on alcohol purchase and consumption. [22]

How to make it?

One can make it at home using a brewing kit and supplies that are easily available in the local market or online. Boil malt extract and hops followed by sterilizing this mixture. Cool the mixture, add yeast, and let the fermentation begin. Store and monitor the fermentation and when the beer has aged properly, store it in the refrigerator and enjoy it with family and friends

Beer can be brewed easily at home by following some simple steps: Boil pale malt extract and hops for about an hour and sterilize the mixture. The hot mixture, also known as the wort is then cooled down and transferred to a fermenter where water is added to it. Yeast is added to start the fermentation process at room temperature. Once it is fully fermented it is bottled and set to age for 2-6 weeks before use.

What is Beer made of?

It is made using 4 ingredients – barley, hops, water, and yeast. These ingredients are easily available in grocery or online stores. It can also be made using wheat and rice instead of barley. It can be made at home using the above ingredients and a brewing kit which comprises containers, fermenters, etc.

When was it invented?

Brewing and drinking of beer date back to 5000 BC. It has been recorded in the ancient history of Mesopotamia. Before the industrial revolution, it was brewed at a domestic level. But post that, it was produced using industrial setups. In present times, there are many companies that produce and sell various varieties.

Rate this article
Average rating 3.8 out of 5.0 based on 737 user(s).
Read This Next:
Popular Articles