The health benefits of Anise essential oil can be attributed to its properties as an anti-epileptic, anti-hysteric, anti-rheumatic, antiseptic, antispasmodic, aperient, carminative, cordial, decongestant, digestive, expectorant, insecticide, sedative, stimulant, and a vermifuge substance.

Since ancient times, anise may have been in use as a spice and flavoring agent for many foods and beverages. It is also employed to flavor liquors. In India and certain other countries, anise may also be used as a mouth freshener and digestive agent. The medicinal properties of this herb were known long ago in ancient Egypt, Greece, and Rome.

The essential oil of anise is extracted by steam distillation of dried fruits of anise or Pimpinella Anisum, as it is known in botanical terminology, which may yield a thin and clear oil of which anethol is the prime constituent, consisting of about 90 percent of it and is also responsible for its characteristic aroma. The other constituents may be alpha-pinene, anisaldehyde, beta-pinene, camphene, linalool, cis and trans-anethol, safrol, and acetoanisol.

Let us see what is known about anise and what medicinal properties have been discovered so far.

May Have Anti-epileptic & Anti-hysteric Effect

Since anise essential oil may have a narcotic and sedative effect, it can calm down epileptic and hysteric attacks by slowing down circulation, respiration, and nervous response, if administered in higher dosages. This is contrary to its possibly stimulating and cordial properties, which are shown when administered in lower dosages. It might even be found effective in sedating nervous afflictions, hyper reactions, and convulsions as well. This property has been known and utilized for a very long time. However, this property should be used with caution, as heavy dosages can have adverse effects, particularly in children.

This oil may provide relief from rheumatic and arthritic pains by stimulating blood circulation, and by reducing the sensation of pain in the affected areas. 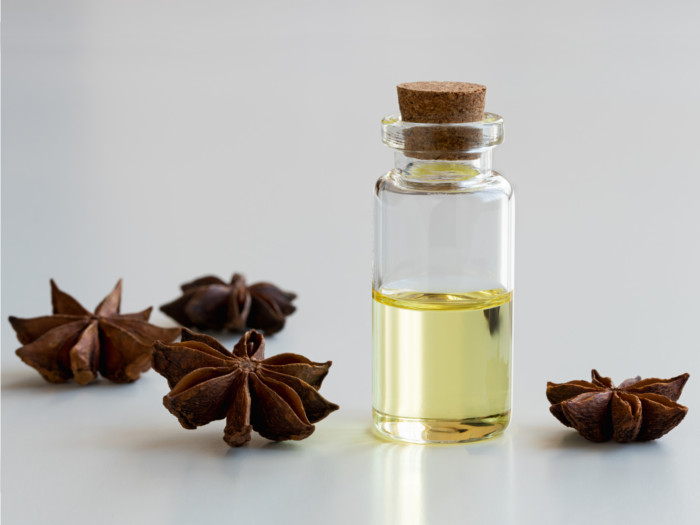 May Help As An Antiseptic

This essential oil might also have antiseptic properties which may give wounds an effective protective layer against infections and sepsis resulting in faster healing of wounds.

May Be Used As An Antispasmodic

Spasms are an excessive contraction of the respiratory tracts, muscles, nerves, blood vessels, and internal organs that result in severe coughs, cramps, convulsions, obstructed blood circulations, aches in the stomach and chest and other symptoms. Situations or ailments caused by spasms are cramps, coughs, aches, diarrhea, nervous afflictions, and convulsions. The essential oil of anise, being a relaxant and an antispasmodic by nature, may help relax these contractions and give relief from the ailments mentioned above. [1]

May Be A Good Aperient

This oil may have mild purgative properties but is safe to use. Unlike other synthetic or harsh purgatives, it may not be hard on the stomach and liver and does not leave you exhausted and fatigued. When taken in low dosages, it might help clear motions and cures constipation, resultant flatulence, and indigestion.

May Have Carminative Properties

Only those who are suffering from gas know what a relief it is to get rid of it. It is a very serious ailment and must be treated in a timely manner. It gives rise to indigestion, flatulence, acute chest pain, stomach aches, muscular cramps and pains, rheumatism in the long run, heaviness, hypertension, and even problems like hair loss and reduction of eyesight if it becomes chronic. Anise essential oil may promote the removal of gases. As a digestive, it may not allow gas to form, as indigestion is the cause of excess gas.

May Be A Potential Cordial

The potential warming effect of this oil on the respiratory and the circulatory systems may make it a cordial. This property might help counter colds, the deposition of phlegm, and problems like rheumatism and arthritis.

May Potentially Be A Decongestant

This oil of anise may be very effective in clearing congestion in the lungs and the respiratory tracts for conditions like asthma and bronchitis.

This property of anise and anise essential oil may be very commonly used to promote digestion. It has been an old practice to chew anise seeds, to serve desserts containing anise, or to have a glass of warm water with few drops of anise essential oil in it so that it may aid in digestion, especially after a heavy meal or a feast. [2]

This oil may prove to be really remarkable as an expectorant and this property earned it an impressive reputation. It may loosen mucus or phlegm deposited in the lungs and respiratory tracts and may give relief from a cough, heaviness in the chest, breathing troubles, asthma, bronchitis, congestion, and other respiratory disorders. Due to the presence of this essential oil in the seeds, the seeds might be used for smoking to loosen catarrh or phlegm.

May Be Usable As An Insecticide

The essential oil of anise may be toxic to insects and smaller animals, therefore its smell keeps insects away. For this reason, this oil can be employed to drive away insects by using it in fumigants, vaporizers, and sprays.

May Be A Potent Sedative

Due to its somewhat narcotic or numbing effects, it might be used as a sedative for anxiety, nervous afflictions, depression, anger, and stress as well as for symptoms such as insomnia due to its tranquilizing and relaxing effects. This effect is particularly visible when it may have been used in higher dosages since in very small doses, it acts as a stimulant. However, the utmost care should be taken while administering it in heavy doses, keeping in view its narcotic effects.

May Be Used As A Stimulant

The stimulating property of anise essential oil may benefit us in the following ways. It might help stimulate circulation and give relief from rheumatism and arthritis, stimulate secretion of enzymes and hormones, thus boosting the whole metabolism and finally, it may stimulate the nervous system and the brain to make us more active and alert.

May Be A Good Vermifuge

This is yet another aspect of its insecticidal property. It may be a powerful agent to kill worms found in the intestines. This property can be particularly beneficial for children, as they are most commonly afflicted with intestinal worms.

Word of Caution: In heavy doses, it has narcotic effects and slows down respiration and circulation. It is poisonous to certain small animals and birds and therefore children should not be given high doses. Furthermore, it may cause irritation to certain skin types. It is best to avoid it during pregnancy. It may also aggravate certain types of cancers caused due to its effect on the estrogen hormone.

Rate this article
Average rating 4.1 out of 5.0 based on 278 user(s).
Read This Next:
Popular Articles