The most important health benefits of kaffir lime may include its ability to promote oral health, detoxify the blood, boost skin health, improve digestion, ward off insects, lower inflammation, aid the immune system, reduce stress, and improve the health of hair.

Kaffir lime is the common name of Citrus hystrix, a tropical fruit that is native to various parts of Asia, including Indonesia, Thailand, and the Philippines. Aside from its culinary uses, due to its uniquely tart and pleasant flavor, kaffir lime is also highly respected in herbal medicine, due to its possibility of high content of beneficial organic compounds that might positively affect the body’s systems. The oil, leaves, fruit, and rind of kaffir limes are all utilized for different purposes. You’ll often find kaffir limes being used in soups and sauces, such as Tom Yum soup, particularly the leaves, which are frequently utilized in Thai cooking. The leaves and rind are so powerful, however, that they can often overwhelm the flavor of the dish. [1]

This strong flavor might be due to the high concentration of alkaloids, citronellol, limonene, nerol, and other organic compounds in kaffir limes. Not only do these provide a unique aroma and flavor, but also a wide range of health benefits. Oil extracted from the leaves, as well as the leaves themselves, are can be used for medicinal purposes. The oil is often mixed with shampoos, soaps, salves, fragrances, and other cosmetic products, while the leaves are usually applied topically or orally to induce a specific healthy result. [2]

Kaffir lime fruits and leaves are used in Southeast Asian cuisine and its essential oil is used in perfumery. Photo Credit: Shutterstock

Let’s take a slightly closer look at the many health benefits of kaffir lime.

The most widespread use of kaffir lime is in the protection of oral health. However, it is not the fruit itself that should be eaten for this, but rather the rind and the leaves. The leaves can be directly rubbed onto the gums to promote good oral health and eliminate harmful bacteria that can build up in the mouth. The oil extracted from kaffir limes can also be mixed in with organic toothpaste and mouthwashes to promote more potent oral and gum care. [3]

May Detoxifies the Blood

The oil of kaffir limes can be mixed in various decoctions for those suffering from blood-borne illnesses or chronic blood-related diseases. The unique mix of volatile compounds might eliminate those pathogens or foreign agents in the blood, along with the possibility of helping the liver and lymphatic system strain out dangerous substances and improve your overall health. [4]

May Maintain the Digestive System

There are a number of components found in kaffir limes that are also found in lemongrass and related herbs. These organic constituents might be anti-inflammatory in nature and they may also stimulate the digestive system. If you are suffering from constipation or indigestion, some kaffir lime decoction may clear your symptoms up and might get your bowels back on a regular track. This might help in preventing more serious gastrointestinal issues in the future, such as colorectal cancer, hemorrhoids, or gastric ulcers however, more research in this is still needed. [5]

In the countries where kaffir lime was traditionally grown, insect-borne diseases may kill thousands of people each year. For that reason, kaffir limes are often used for their insect repellant properties. The citronellol and limonene found in kaffir limes may be very unappealing to most insects, and when you put a lotion or a salve containing kaffir lime juice/oil on your skin, you can significantly decrease your chances of being bitten by bugs, whether they may infect you or not. [6]

Kaffir lime juice and extracts can be mixed into many cosmetic and bath products for their wonderful smell, as well as their possible antioxidant properties. Some of the acids found in kaffir limes might help to neutralize free radicals, the dangerous byproducts of cellular respiration that may cause cell mutation or apoptosis, as well as cancer. Antioxidant compounds also slow the breakdown of cells and minimize the appearance of age marks, scars, and pimples. If you want your skin looking healthy and fresh well into your old age, then perhaps some kaffir lime juice is precisely what you need! [7]

For those suffering from rheumatism, arthritis, edema, gout, or some other inflammatory condition, kaffir limes might be a very effective remedy. You can use the juice, leaves, or oil extracts topically on the area where you are experiencing discomfort or pain, and you can also consume the fruit and the juices to enjoy a similar effect. This possible anti-inflammatory effect might make kaffir lime juice beneficial for headaches and migraines. [8]

Although most people don’t think of kaffir limes as being particularly useful in aromatherapy, the oil extracted from these powerful fruits might be used aromatically with great effect. If you suffer from anxiety or various nervous disorders, spending some time inhaling these soothing vapors may calm the body and mind. [9] 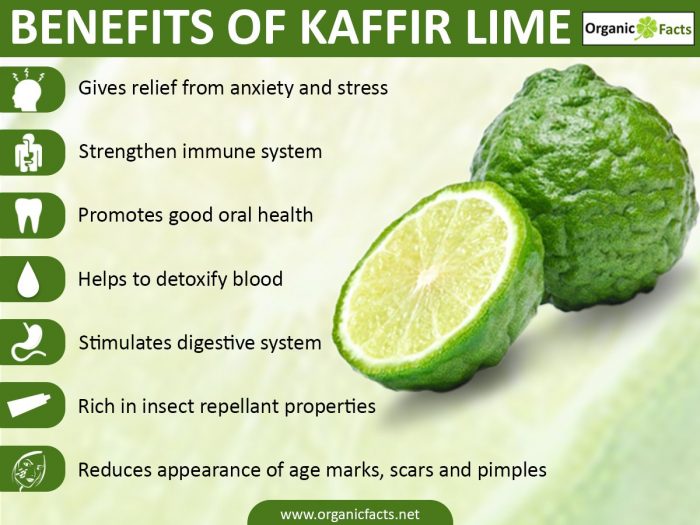 The possible antibacterial and antioxidant qualities of kaffir limes can make them powerful tools to boost the immune system. Not only does the topical application may prevent infections and bacteria from accumulating on the skin, but when consumed, kaffir limes might help to prevent a wide variety of gastrointestinal illnesses and may stimulate the immune system via antioxidant effects. [10]

One of the less well-known applications of kaffir lime juice and leaves is in the hair. You can apply decoctions and mixtures to the scalp and hair to possibly slow the onset of male pattern baldness and strengthen the follicles of the hair. This can also moisturize the skin to prevent dandruff and might improve the appearance and shine. [11]

Word of Caution: Due to the potency of the extracted oil of kaffir limes, it is not recommended for direct consumption, as it can result in nausea, vomiting, dizziness, lightheadedness, and other unpleasant side effects. Always mix the essential oil with water or another diluting agent. Other than that, there are no reported side effects of kaffir lime use. As with any herbal remedy, always consult a medical professional before making a major change in your supplement schedule.

Rate this article
Average rating 4.0 out of 5.0 based on 288 user(s).
Read This Next:
Popular Articles