Malay Apples are a fruit with a dozen different names depending on where you are eating it, but it is native to Vietnam, Malaysia, and Indonesia. You may call it a “rose apple”, pomerac, jambu merah, or even Otaheite cashew. However, its scientific name is Syzygium malaccense. Similar to “traditional” apples, Malay apples have white flesh surrounding a core of seeds, and has the same texture and flavor quality as more common apples as well. It has spread throughout tropical regions, including the Caribbean, Central America, and various Oceanic regions. [1]

The skin and flesh of this delicious fruit variety can be eaten and is known to be beneficial for human health, due to its significant levels of vitamins and minerals, as well as the organic compounds. Malay apples contain flavonols, phenolic compounds, and sequiterpenes, as well as limited amounts of carotenoids, all of which act as antioxidants. Furthermore, they also contain dietary fiber and limited amounts of proteins.

Malay apples are very important for people who want to keep their mineral levels balanced, particularly because it has significant amounts of phosphorous, calcium, and iron.

This particular variety of apples also has a strong content of vitamins; a single serving contains moderate amounts of vitamin C, vitamin A, and niacin. 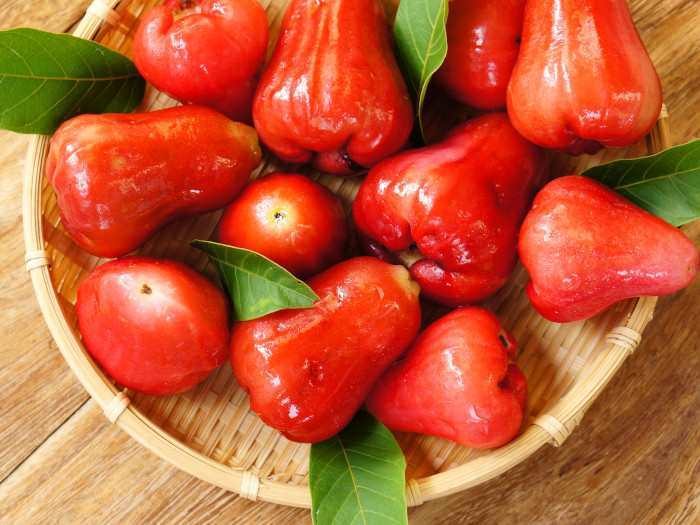 Malay apples, as the name suggests, are native to Malaysia. Photo Credit: Shutterstock

The health benefits of Malay apples include their ability to reduce inflammation, improve the health of the skin, boost circulation, build stronger bones, improve vision health, strengthen and improve the quality of hair, and prevent the development of cataracts. [2]

Pond apples are often considered the black sheep of the apple family because the trees tend to grow in rather harsh conditions of high salinity, but they are also considered a weed/invasive species, as they can grow quickly and harm the health of ecosystems. The tree is native to Florida (US), Central America, and the Caribbean, but has now spread through the Pacific and South America as well. The fruit is often eaten by wild boar and alligators and falls from the trees when ripe (yellow or green). It is fit for human consumption and tastes somewhat like honeydew melon. It is often used to make jams and various desserts, as well as being a popular ingredient in certain beverages in the Maldives and other tropical cultures. [3]

Research suggests that pond apples are beneficial to human health due to its wealth of different fats, many of which are essential to human health, including caprylic, betulinic, capric, lauric, oleic, linoleic, and palmitic acids, among others. The fruit is also a rich source of dietary fiber and small amounts of protein. [4] [5]

There is not much nutritive value in pond apples, but they do possess limited amounts of phosphorous and calcium. [6]

Although the exact amount of calories in pond apples has not been calculated, related cultivars have between 80-120 calories per 100 grams.

Again, limited research has been done on pond apples, also known as alligator apples, but the high levels of fatty acids in the pond apples, as well as dietary fiber, calcium and phosphorous,  have shown that it can decrease levels of “bad” cholesterol, boost heart health, improve digestion, build strong bones, and be an effective supplement to metabolic efficiency in the body. [8]

Rate this article
Average rating 4.0 out of 5.0 based on 56 user(s).
Read This Next:
Popular Articles