The health benefits of rowan berries include its ability to boost the immune system, strengthen the respiratory system, improve digestion, reduce the risk of cancer and various bacterial infections.

What are Rowan Berries?

Rowan berries, often called “rowanberries” are small, acidic fruits that grow on rowan or mountain-ash shrubs or trees. The most widely consumed species has the scientific name Sorbus aucuparia, which happen to belong to the rose family, Rosaceae and there are dozens of different cultivars and species. Rowan berries are actually “pomes” as berries are a single fruit.

These shrubs and trees have spread to parts of North America and have also been in Scandinavia and Newfoundland for hundreds, if not thousands of years. They tend to grow in cold climates and are found in Northern Europe, high in the Balkans, and in Northern Asia, as well. 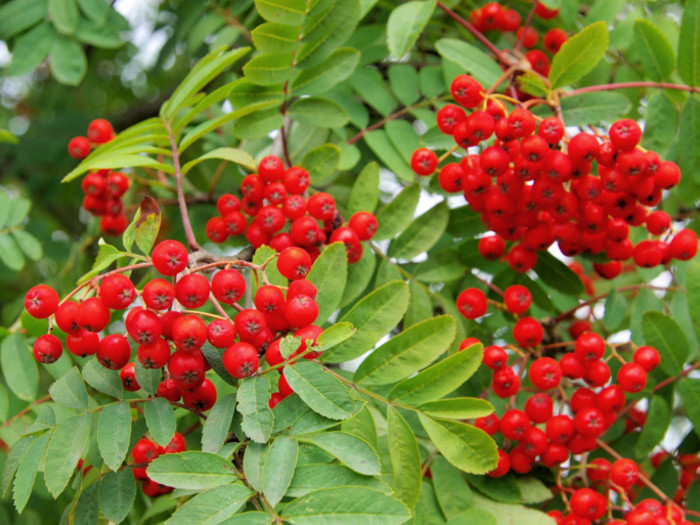 This tiny berry packs quite a nutritious punch and includes high levels of vitamin C, sorbic acid, and dietary fiber, but they are mostly praised for their unique antioxidant composition. Rowan berries contain anthocyanins, tannins, polyphenolic compounds, and flavonols, including various types of quercetin and rutin.

Let’s take a look at the benefits of rowan berries.

The high levels of antioxidants found in rowan berries make it a very powerful superfood against various chronic diseases, including cancer. A team of researchers from the College of Pharmacy, Kurnool, Andra Pradesh, India wrote a report, which stated that quercetin varieties and sorbic acid both act as antioxidants, preventing the harmful effects of free radicals throughout the body. Free radicals are the dangerous byproducts of cellular metabolism that can cause healthy cells to mutate into cancerous cells, or simply perish. Eating rowan berries, according to a study by Anne T. Hukkanen, Satu S. Pölönen, (et al.) Institute of Applied Biotechnology, University of Kuopio, Finland, can significantly boost your antioxidant levels, which means preventing cancerous growths, reducing the chances of premature aging, improving the health of your skin, increasing cell regeneration and healing rates, and boosting eye health, including reducing the chances of macular degeneration.

Although rowan berries aren’t packed with a variety of vitamins, they are found to have high levels of vitamin C. Ascorbic acid is a very important element in human health, as it can stimulate the production of white blood cells and act as an antioxidant as well. Furthermore, vitamin C is essential for a number of bodily processes, including the creation of collagen, which strengthens muscle tissue and helps to build/repair blood vessels.

Sorbic acid has been directly linked to reducing the effects of microbial and bacterial agents on the skin and in the body. Therefore, in cosmetic use, rowan berry extracts are occasionally used, but as a food source, it can function as an antibacterial and antimicrobial booster.

Fiber, which is found in moderate amounts in rowan berries, helps to facilitate digestion and reduce constipation by bulking up the stool and optimizing your gastrointestinal system. Furthermore, the organic compounds in rowan berries are thought to directly improve any symptoms of diarrhea, although the exact mechanism of this is still unclear.

In traditional medicine, rowan berry juice was used to reduce inflammation of the respiratory tract, improve sore throats, and relieve asthma and congestion. Some of this may be due to the antioxidant compounds that also act as anti-inflammatory agents, while vitamin C is known to soothe the symptoms of asthma. Whatever the direct links are, rowan berries have been trusted for generations as a home remedy for respiratory ailments.

Word of Caution: When rowan berries are picked in the wild, they contain high levels of parasorbic acid, which can actually cause kidney damage, indigestion, and a range of other illnesses. However, once frozen or heated, this acid changes to the beneficial sorbic acid, which our body finds very useful. Therefore, don’t go out picking wild rowan berries, make sure you properly prepare them first to get the most benefits!

Rate this article
Average rating 3.9 out of 5.0 based on 95 user(s).
Read This Next:
Popular Articles