Agrimony is the name given to a genus of approximately 15 flowering species that can be found throughout the Northern hemisphere. These perennials can also be found in certain parts of Africa and have been celebrated for their medicinal uses for hundreds of years. While many of the potential benefits are still somewhat in contention, hundreds of years of tradition and countless confirmations of its effects have made it an important element of many herbalist practices and treatments. Some of the common names are liverwort, cockleburr, and sticklewort, but its scientific name is Agrimonia eupatoria.  [1]The best way to identify this species is by the yellow flowers that spring from the plant’s long, single, pinnate stems.

In ancient times, agrimony was often used in various brews, solutions, and tonics. The leaves and flowers contain a unique chemical composition that can act on the body as a detoxifying, astringent, coagulating, and anti-inflammatory substance. For this reason, it has been used in the direct or secondary treatment of a wide variety of ailments over time. Now, let’s take a closer look at the health benefits of agrimony. [2] 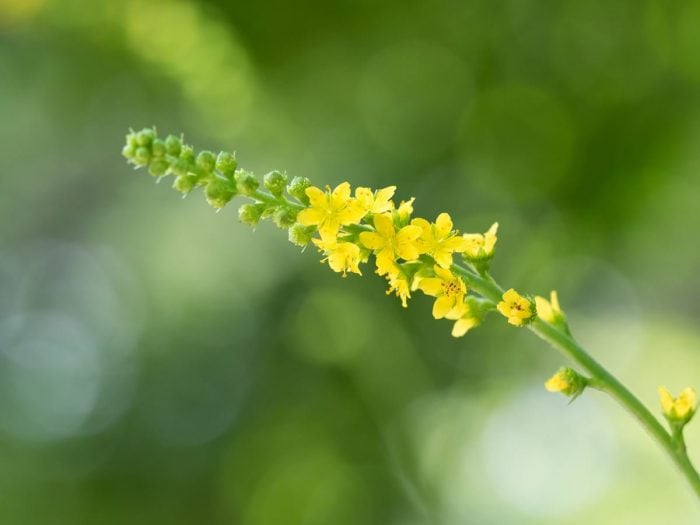 Health benefits of agrimony include:

One of the most well-known uses of agrimony is as a coagulant that can reduce bleeding in the body and help heal wounds. While menstruation isn’t a “wound”, per se, agrimony can be administered orally to reduce heavy menstrual bleeding and reduce inflammation to make those difficult periods a bit more tolerable. [3]

As an anti-inflammatory agent, agrimony has often been used to eliminate digestive and gastrointestinal issues, particularly diarrhea and irritable bowel syndrome symptoms. By reducing irritation and inflammation in the membranes and tissues of the gut, it can significantly soothe the stomach.

Agrimony has long been studied for its potential anti-diabetic properties, which would be a huge step forward in solving one of the great medical mysteries of our generation. Apparently, the active components moderate the glucose and insulin uptake processes in the body better than many other natural diabetes treatments. [4]

In a similar way as reducing inflammation in the gut, agrimony is also widely used to improve respiratory conditions that may involve inflammation, such as sore throats, chronic coughing, bronchitis, and other sinus issues. For colds, coughs, and flu, it can be an effective way to speed up the recovery and healing process. [5]

The astringent quality of agrimony is said to make bladder control easier. Since it is non-toxic and has shown no signs of having negative effects on health, it is being given to children for generations with no side effects or issues. [6]

When you are suffering from blemishes, pimples, rashes, acne, psoriasis, eczema, or any other skin condition, you can topically apply agrimony to the affected area and it can help to alleviate the issue. It can also be taken orally for the same effect. It works on irritation as well as blood eruptions that happen beneath the skin, like blotching and easy bruising due to its astringent properties. [7]

Agrimony’s active ingredients, such as thiamin, quercitrin, and catechins, have been directly linked to liver and gallbladder health. By optimizing the function of the liver and gallbladder, the body can more easily eliminate toxins that have built up, thereby preventing more serious health issues and promoting overall metabolic efficiency. [8]

Silicic acid is also found in agrimony. This unique compound is known to significantly boost the strength, appearance, and overall health of the nails and hair, preventing easy breakage or a dull appearance. [9]

Agrimony has found a variety of therapeutic uses worldwide, throughout history. A research article on the history of basal cell carcinoma suggests that leaves and seeds of this plant were used for topical application against various health conditions including cancer and ulcers. A 2015 paper published in the [10]Asian Journal of Pharmaceutical Science & Technology [11] suggests that plant extract has antitumor properties.

Another 2017 paper also points towards its antioxidant and anti-inflammatory properties, which could help in neutralizing free radicals. Agrimony may protect against the free radical damage linked to cancer incidence. [12]

Further studies are required to fully explore the anticancer potential of agrimony. [13]

In moderate amounts, agrimony is not known as a toxic or allergenic substance for people of all ages. However, due to its astringent properties that help treat so many conditions, this can also exacerbate constipation, so use with caution. Always consult a doctor before adding new herbal remedies to your daily or weekly health regimen.

Rate this article
Average rating 4.2 out of 5.0 based on 79 user(s).
Read This Next:
Popular Articles