Chicory is a woody, herbaceous plant that has many health benefits. These may include its possible ability to ease digestive and gastric issues, reduce arthritis pain, prevent bacterial infections, boost the immune system, and reduce the chances of heart diseases. It is also a natural sedative that can fight against kidney stones and may promote weight loss. All in all, this small plant is a powerful addition to any diet.

Chicory is a Mediterranean plant that is cultivated for its culinary use in preparations like salads and various other medicinal applications. It grows well in many different conditions and is commonly found on the roadsides in Europe, where it originated, but it has now naturalized into the Americas as well. The leaves, buds, and roots all have certain beneficial qualities. The leaves are used in a similar way as spinach in many cultures. The root is often ground into a powder and used as a coffee substitute. Chicory has been used for hundreds of years as a herbal remedy for many diseases and continues to prove its worth today. [1] 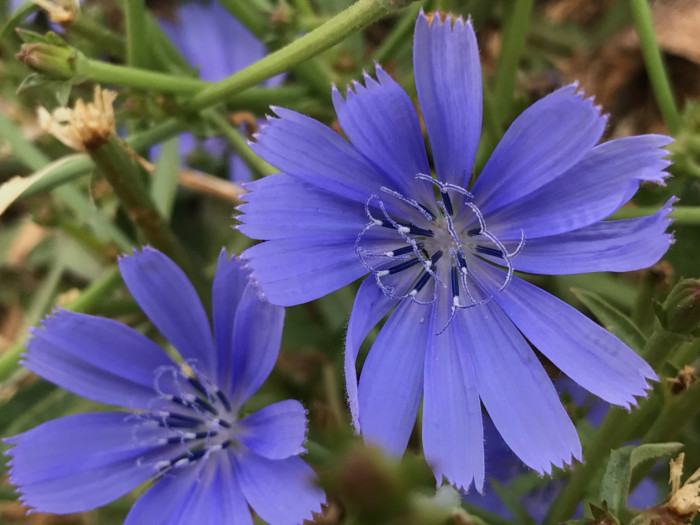 According to the USDA FoodData Cental, chicory is a great source of vitamins and minerals, including zinc, magnesium, manganese, calcium, iron-folic acid, and potassium, as well as vitamin A, B6, C, E, and K. These are the main agents behind all of the health benefits that come from chicory. [3]

The health benefits of this plant include:

Chicory is great for your digestive health as it possibly contains inulin, which can act as a powerful prebiotic. Prebiotics is a classification of bacteria that confer benefits on the host, rather than diseases. One report published in the journal FEMS Microbiology Ecology reports that inulin is used to combat a number of intestinal and digestive concerns, including acid reflux disease, indigestion, and heartburn because it actively reduces the acidity of the body’s systems. Thus, chicory plays a vital role in easing digestion. [4]

Inulin is not only beneficial for the digestive system, but it has also shown to reduce the levels of LDL cholesterol (also known as bad cholesterol) in the body. This type of cholesterol is one of the main causes of atherosclerosis and high blood pressure as it blocks the flow of blood when it binds to arteries and veins. It can also contribute to the possibility of heart attacks and strokes. Interestingly enough, the chemical pathway that inulin functions in to reduce the presence of LDL cholesterol is rarely active unless a person consumes a high level of carbohydrates, so this benefit has a slightly smaller range of effects.

More research is underway exploring how chicory can help heart health in other ways. Meanwhile, Dr. Jean Charles Fruchart, of International Atherosclerosis Society stated that generous helpings of low-calorie vegetables such as chicory should be included in one’s diet to prevent cholesterol and eventually heart disease. Besides, chicory is also packed with plant phenols, which have been widely studied as anti-thrombotic and anti-arrhythmic agents. They are considered antioxidants, and studies have shown that chicory-based coffee rather than a normal coffee can significantly improve the balance of blood and plasma in the body, which reduces the chances of cardiovascular diseases. [5] [6]

Chicory extract has been linked to a reduction in tumor growth in various cancer studies. Early reports indicate that it is due to the fructans within chicory, which have potential anti-tumor qualities and antioxidant properties. According to a report on the influence of inulin in breast cancer and tumor growth in the Journal of Nutrition, polyphenols, and phytochemicals within chicory may also be an easy risk-free method for helping to prevent cancer of various types, including breast cancer and colorectal cancer. [7]

Chicory has traditionally been used as a treatment for arthritis, and studies have shown it to have anti-inflammatory properties, which is why it reduces the pain in conditions like osteoarthritis. In a 2010 study, 70 percent of the test subjects who received the chicory treatment reported a noticeable improvement in the pain associated with their osteoarthritic conditions. Chicory can also be used as a general anti-inflammatory agent for aches, muscle pains, and joint soreness for this same reason. [8]

Chicory is possibly a good source of oligofructose, and inulin itself is a form of natural dietary fiber, which helps in the management of weight by promoting weight loss. Both of these aid in the regulation of ghrelin, an amino acid primarily associated with feelings of hunger and food-seeking behavior. A 2012 report published in the Obesity Research Banner cited research involving rats to study the impact of chicory in the entire weight loss process. It was concluded that by reducing the amount of hormone ghrelin, chicory can reduce the chances of overeating and promote satiety or the feeling of fullness, thus helping in weight loss. [9]

Once again, the role of inulin as a natural fiber comes as a major benefit to chicory eaters! The fiber helps bulk up bowel movements and promote peristaltic motions and the secretion of gastric juices. Basically, this means that digestion as a whole is improved, and constipation too is greatly reduced. By maintaining a smooth and regulated digestive process, people can reduce the chances of a number of gastrointestinal conditions and diseases. [10]

Chicory has a number of helpful qualities that make it a powerful booster for your immune system. It displays clear antibacterial effects on a number of dangerous strains of bacteria, and we have already mentioned the benefits of the polyphenolic compounds in chicory in terms of an immune system boost. There are phytochemicals that act as potential antioxidants, further sweeping out free radicals from the bloodstream. This reduces the chances of contracting a number of diseases. [11] [12]

Chicory has sedative qualities that are thought to reduce anxiety and soothe the mind, thereby relieving stress and the dangerous effects it can have on the body. A 2016 report, based on the connection between nutrition and mental health, published in the Performance Health Center journal, revealed that chicory root extracts can also be used as a sleep aid due to this sedative quality and are much healthier than many of the sleeping pills on the conventional market. Relieving stress and anxiety can also help reduce your chances of heart disease, hormonal imbalance, insomnia, cognitive decline, and premature aging. [13]

The chicory root extract is often used as a diuretic, which increases urine volume. Frequent urination can help eliminate toxins that the body stores in the liver and kidneys, and thereby prevent the dangerous conditions that occur when toxins are allowed to remain in the body. Also, frequent urination can eliminate excess water weight, and even reduce fat, since 4 percent of urine is usually fat deposits that would otherwise be stored somewhere else in the body. [14]

Side Effects of Chicory

Although there are many benefits of using chicory for your health, you should not consume it in excess.

Other than that, enjoy this food in your coffee, or whatever other preparation brings you all of these wonderful benefits!

Rate this article
Average rating 4.0 out of 5.0 based on 482 user(s).
Read This Next:
Popular Articles